Polly Roger is a recurring antagonist in the Canadian-French animated television series Donkey Kong Country. He is a crazy, sadistic parrot who regularly insults and backstabs his allies when he is offered a better deal. He starts off as a lackey for Kaptain Skurvy before becoming his own villain in later episodes, occasionally working for King K. Rool.

Polly Roger appears as a supporting antagonist in the episode "Booty and the Beast", the central antagonist in "Raiders of the Lost Banana", the secondary antagonist in "The Curse of Kongo Bongo", a flashback character in "Ape-Nesia" and "Message in a Bottle Show", and the main antagonist in "Speak No Evil, Dude".

Despite being somewhat dimwitted, Polly Roger is shown to be dangerously manipulative and sadistic throughout the series. In "Raiders of the Lost Banana" for example, he pretends to side with Donkey Kong and Diddy Kong, only to betray them at the last minute, claiming he simply "changed [his] mind". He then attempts to inflict a curse on the Kongs by stealing an ancient golden banana from Inka Dinka Doo.

In "Speak No Evil, Dude", Polly begins to spread a disease called the Kongo Bongo Gone Wrongo disease. He successfully manages to inflict it on Diddy Kong, King K. Rool and Krusha. He sadistically taunts Donkey Kong when General Klump tries to blow up the island after misunderstanding K. Rool, arguing he can only either save his friend or the island.

Furthermore, Polly does not show any loyalty towards others. When he steals a banana which cures the Kongo Bongo Gone Wrongo disease, which both DK and K. Rool want, he says he will only offer it to whoever has more to offer him. 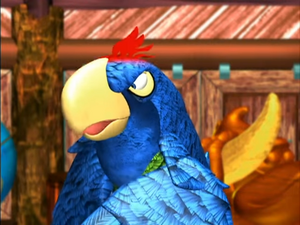