Folklores and mythologies of almost every culture on Earth

Putting fear into their victims.

Malefic Spirits
A Poltergeist is an extremely malevolent and destructive entity common in the folklore and mythology of almost every culture on Earth. The name itself translates into "noisy ghost", but poltergeists exhibit specific powers and patterns that differ them from regular ghosts. It is believed that poltergeists will attach themselves to a victim who attempts to flee or exorcise the spirits, resulting in great disaster. Even if exorcised completely, there have been accounts of poltergeists returning to plague their victims again.

While ghosts will haunt a specific area (normally the place of their death), a poltergeist may latch onto a family or individual, and become a plague upon their life. Even the moving home is said to be futile, as the poltergeist will follow its victim if it has latched on.

Poltergeists are also far more malicious than ghosts, and actively seek to harm the living. They will violently throw objects around, create horrible sounds, manifest gruesome imagery, and even cause physical harm to victims via causing bite marks, scratches or other disfigurement. Some of the most terrifying poltergeists have even been reported to levitate people off the ground, electrocute them, toss them down stairs, or other acts far more direct and dangerous than those of a typical ghost.

Poltergeists also tend to stay invisible, only manifesting briefly (if at all). For this reason, some believe that poltergeists are not spirits, but destructive psychic energy; akin to the idea of a tulpa, this theory does not always add up to the malevolent intelligence seen in some poltergeist cases, where the poltergeist seems to have a very determined and cruel personality.

Poltergeists have been said to be demons, the restless dead, extra-dimensional entities, fairies, trolls, goblins or other magic beings. Some even class them as a unique supernatural entity in their own right.

In many superstitions, witches, warlocks, and other practitioners of dark magic could summon poltergeists to cause havoc on victims. In some superstitions, poltergeists may even be the spirits of such wicked magic-users (as was seemingly the case with the infamous Bell Witch, a seemingly fatal poltergeist haunting in North America). 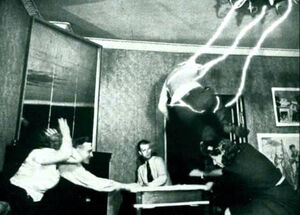 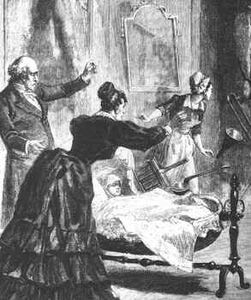 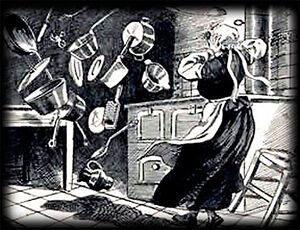