Skills in the Force

Talking down to clones.
Secretly revealing important information to the Separatists.

Ingratiate himself to Count Dooku and become his apprentice.

Rule as part of the future Galactic Empire (both failed).

He is a very stern Besalisk male fallen Jedi Master who served as a Jedi General during the Clone Wars. An unyielding Jedi General, Krell took a no-nonsense approach when it came to commanding a group of clone troopers. Having won many key Republic victories during the war, the Besalisk Jedi Master was recognized as a successful general among Jedi and clones alike but had the highest amount of clone casualties under his belt. He is also the former boss and archenemy of Captain Rex.

He was voiced by Dave Fennoy, who also voiced Black Manta in Suicide Squad: Hell to Pay and Ronald Taylor in Mass Effect 2.

Around the second year of the Clone Wars, Krell was present on the Confederate-aligned world Umbara, where he took over the command of the 501st Legion as an interim. Under his command, the troops of the 501st were ordered to take the planet's capital city in a full frontal assault on a highway that led into the city. Often at odds with Clone Captain Rex, Krell did not come to terms with the 501st Captain.

When the clone troopers had to capture an Umbaran airbase before they could proceed into the city, Rex, with many of the troopers under his command, felt uncertain about the order, due to the route Krell wanted the clones to take to reach the airbase leaving the clones exposed to the enemy.

After the capture of the airbase, Krell's battle group learned of a Confederate supply ship in orbit over Umbara. Even though Krell wanted all his troops to take the city, three clone troopers under his command – Jesse, Hardcase, and Fives – disobeyed the order and boarded separate starfighters to dock with the supply ship. When only Jesse and Fives returned, Krell wanted them to face the Grand Army's court-martial for disobeying orders, and when Rex tried to argue against it, Krell instead ordered him to organize a firing squad to execute the clones. When the clones refused to follow this order, Krell ordered Rex and the rest of his men to hunt Umbarans disguised in clone armor, the Jedi Master's betrayal was revealed when Rex's men learned that they were killing Kenobi's clone unit, who equally received the same order from Krell to kill clone-disguised Umbaran troops.

Rex, with Kenobi's troopers, attempted to arrest Krell for his treasonous act, although the Besalisk avoided capture by engaging the clone troopers in combat, killing many of them. After a brutal battle in the jungles of Umbara, trooper Tup knocked Krell unconscious by stunning him, and the fallen Jedi was taken to the airbase's prison. There, Krell revealed that he had foreseen that the Jedi would lose the Clone Wars and that a new order would rise in the place of the destroyed Republic, and wanted to become Count Dooku's apprentice. Trooper Dogma, who was present at the time, took a blaster and shot Krell in the back, killing him instantly. The battle was later won by the Republic.

In war, Pong Krell is a very obdurate, ruthless, relentless, and intransigent Jedi Master who settled for nothing less than absolute victory on the battlefield. Committed to both the Jedi Order and the Galactic Republic, Krell became a successful general through his unorthodox but efficient strategies. He is supremely equanimous and confident in his command style, and thus he expected complete obedience to the chain-of-command from his subordinates.

During the Battle of Umbara, Pong Krell displayed very low opinion of clone troopers, but he was especially antagonized by Clone Captain 7567 (Rex). He is also extremely irritated by the captain's suggestion to let the troopers rest before completing their objective, as well as their failure to defeat Umbaran soldiers without the assistance of his reinforcements. Krell was also not afraid to use the threat of deadly force to put insubordinate troopers back in their place, as ARC-5555 (Fives) discovered when his outspoken criticism of the general's leadership was silenced with an order at the point of a lightsaber blade.

In terms of military strategy, Krell is keenly aware of Umbara's significance to the Republic's war effort, including the fact that the chances of victory depended primarily on himself and the 501st Legion. Though viewed by some clones as a gruff, pejorative, and uncompromising tactician, the fiercely focused Krell was unshakably determined to achieve the best results in battle so that the outcome would be nothing short of a Republic victory. Consequently, however, this record for success also produced a record for the highest casualties as well, which Krell rationalized as a natural consequence of war. Although he was a highly skilled combatant, Krell did not normally get involved in the fighting unless absolutely necessary. During the Battle of Umbara, he intentionally remained away from most of the fighting in order to covertly assist the Umbarans and the Separatists.

Very far from being an incompetent general as some of the 501st initially perceived him to be due to his seemingly reckless strategies, Pong Krell revealed his true nature when his own clone troopers attempted to arrest him. He detested the clones as "creatures" hatched in the laboratories of Kamino. He also took immense pleasure in killing many clones with ease, as well as the fact that he no longer had to hide behind his Jedi facade. By this time, the tenets of the Jedi Order had become meaningless to Krell. In his eyes, the Jedi were too naive, credulous, and unsuspecting, and the path to true power was through the Sith. As a result of his new beliefs, Krell reveled in the Dark Side of the Force. 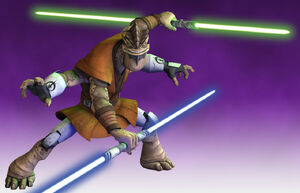 Krell before revealing his betrayal. 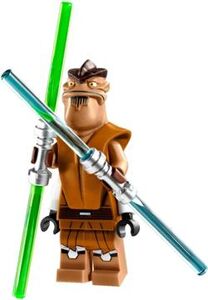 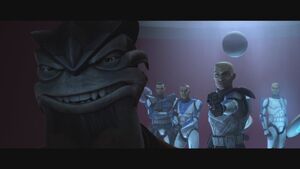 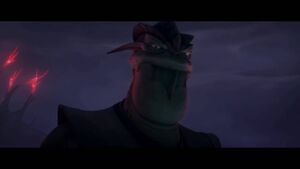