The Pony of Shadows

Founder of the pillars

Bring the Pillars together to save Equestria (succeeded).

Make copies of the Pillars' weapons/artifacts to be a Pillar and noticed along side his friends (failed).
Escape from limbo (succeeded).
Defeat the Pillars of Old Equestria to get revenge on them for betraying and exiling him without asking and letting him explain his actions against their artifacts then spread his darkness across all over Equestria to make everyone feel his despair (all abandoned).

Stygian, better known as the Pony of Shadows, is a major antagonist in My Little Pony: Friendship is Magic, appearing as the main antagonist in the Season 7 finale, "Shadow Play".

He is a unicorn scholar and the founder of the Pillars of Equestria, who was also their friend as he brought them together to save his home and Equestria. After a terrible misunderstanding led him to be outcasted by the pillars, he was then transformed into a monstrous pony made entirely of shadows who desired to cover the entirety of Equestria in darkness before he was reverted back to his original form by the pillars as well as the Mane Six.

He was voiced by Bill Newton, who also played Bright Macintosh and Pharynx in the series.

The Pony of Shadows was originally a male unicorn named Stygian, who lived in Equestria more than 1,000 years prior to the events of the series. One day, Stygian's village was attacked by the Sirens, who used their magic to turn everypony against each other in order to feed off their negativity to become even more powerful. In order to save his home, Stygian traveled across old Equestria in search of the country's greatest heroes, which included Rockhoof, Flash Magnus, Mistmane, Somnambula, Mage Meadowbrook and Star Swirl the Bearded. Together, they formed the Pillars of Equestria and fought the Sirens, banishing them into a different dimension and saving Stygian's home.

After vanquishing the Sirens, the Pillars stuck together and continued to defend Equestria from future threats. During this time, Stygian provided assistance by studying their foes and planning strategies for them. However, while the others were hailed and respected by all, Stygian wasn't recognized in the slightest for his own contributions because he always watched from sidelines while his friends did all the work. Desperate to be noticed and wanting to prove himself a hero as well, Stygian secretly borrowed a treasured belonging from each of the other Pillars and brought them all to Ponehenge in order to perform a spell that will create copies of the artifacts so that he can fight alongside them. However, the others discovered this and believed he was trying to take their power for himself. After taking back their artifacts and stopping Stygian's spell, they then banished him from the team without even giving him the chance to explain the reasons for his actions. At the time, Stygian believed that the Pillars were just being selfish and didn't want to share their power with him, causing him to despise his former friends.

Shortly afterwards, a heartbroken and embittered Stygian discovered the Well of Shade in the Hollow Shades. There, he encountered a mysterious and shadowy entity known as "The Darkness", which promised Stygian the power to take his revenge on those who supposedly betrayed him in return for helping the entity plunge the world into eternal darkness. Enticed by this promise, Stygian agreed to this deal, and the two merged into a single shadowy being; the Pony of Shadows.

The Pony of Shadows then attacked the Pillars of Equestria and began spreading darkness and chaos across the land, desiring every pony to feel the pain he had. Realizing that they couldn't defeat him conventionally, the Pillars then decided to perform a ritual to banish him to the space between dimensions known as Limbo. However, the ritual would require them to banish themselves along with their former friend to accomplish this. Willing to sacrifice themselves to save Equestria, all the Pillars agreed to this plan. But before they did, they each poured their essence into a seed and planted them in a cave underneath the Castle of the Two Sisters, which would eventually grow into the Tree of Harmony that would help future heroes in defending Equestria.

Over a thousand years later, the Pony of Shadows was inadvertently released from Limbo by Twilight Sparkle, who with the help of her friends freed the Pillars from the dimensional gap as well. The Pony of Shadows then destroys Stonehenge and Starswirl's spell book so he can't be sent back and attempts to attack Starswirl. However, Twilight and Starlight Glimmer counter his attack, forcing him to retreat to shadowy areas of Equestria to regain his power.

Due to the industrialization of Equestria over the past millennium, many of the areas that were once known to be dark are now populated and bright, thus buying Twilight and her friends time to come up with a plan on how to locate and re-contain him. The initial plan was to sacrifice the Elements of Harmony in place of the Pillars, but Starlight suggested that they should try to make peace with Stygian to regain his friendship, only to be rebuffed by Starswirl who firmly believed that Stygian was beyond redemption.

Eventually, the ponies are led by the castle's map to the Hollow Shades, which is now an abandoned ghost town on the edge of Equestria. After traveling there, the entire town collapses into the ground to reveal the Well of Shade, where Stygian first became the Pony of Shadows. The Pony of Shadows explained how Stygian and the Darkness met and fused into one before attacking Starswirl again. At that moment, the Mane Six and the Pillars open a portal to banish the Pony of Shadows and the Elements of Harmony into Limbo. However, as the Pony of Shadows begins to slip into the portal, Twilight sees Stygian himself struggling from within the black mass that is his body and dives in.

She then finds Stygian, sitting alone in the darkness. There, he revealed his true intentions for stealing the Pillars' artifacts. The Pillars and the rest of the Mane Six overheard their conversation, and the Pillars were shocked and horrified to learn that Stygian truly was their friend and that banishing him led him down the darker path. As the darkness begins to overtake Stygian again, Twilight urges him to forgive his friends and abandon the darkness. When Stygian questions why Twilight would believe he can be saved, Starlight joins Twilight and explains that she was like Stygian until Twilight managed to convince her of the power of friendship. Stygian then states that while he wants to believe what they say, he then becomes possessed by the Darkness again and boasts that it can never be defeated.

Twilight then takes a more forceful approach by lassoing Stygian's foreleg with her magic to pull him out of the Darkness while urging him to fight it. It was then that Starlight, the Mane Six and the Pillars combine all of their magic to pull Stygian out of the Darkness, which they succeed in doing. As a result, the Darkness was left without a host and could not prevent itself from being sucked into the portal on his own, causing it to be banished back into Limbo for good.

With the Darkness gone and the Elements of Harmony and Pillars of Old Equestria both intact, the land was at peace once again, and Starswirl apologizes to Stygian and rekindles their friendship.

The Pillars and Stygian encountered an alternate version of the Pony of Shadows after he abducted a young Celestia and Luna, intending to turn them into Daybreaker and Nightmare Moon. Despite his power, the alternate Pony of Shadows was thwarted due to Stygian's inexplicable ability to command his creatures. When he attempted to blast Stygian, their magics reacted and caused an explosion, and Stygian announced himself before departing for home with the Pillars. The alternate Pony of Shadows, who had recognized all of the heroes except Stygian, was then revealed to be the Stygian of that universe.

Before his transformation, Stygian was a weak, skinny unicorn with a gray coat and a blue mane. He wears a brown coat over his body. His horn is tinier than any other unicorn's horn.

After becoming The Pony of Shadows, he takes on the form of an amorphous dark gray Alicorn with glowing white eyes and wispy, smoke-like wings. His horn becomes large and curved, much like King Sombra.

In both forms, he speaks in an indistinct European-sounding accent. In his mutated form, his voice also has a filter effect similar to what Queen Chrysalis had in Season 2, albeit much deeper.

Stygian was reverted back to his original form after being separated from The Pony of Shadows.

Before becoming completely evil, Stygian was rather soft-spoken, persuasive, imperturbable, and non-confrontational. Rockhoof refers to him as "scholarly".

As the Pony of Shadows, he becomes much more arrogant and loud. He constantly belittles the Pillars of Old Equestria and mocks Twilight for unknowingly setting him free. Even until the moment of his defeat, he maintains his composure and acts unfazed.

After being separated from the darkness and reconciling with Star Swirl, Stygian forgives him and the Pillars and returns to being a happier and kinder pony. 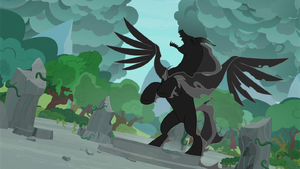 The Pony of Shadows' evil laugh. 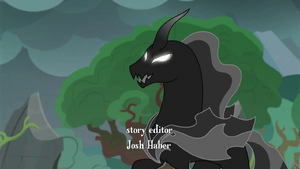 "Your pitiful attempt to imprison me has failed, Star Swirl!" 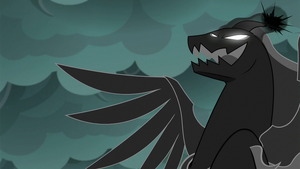 The Pony of Shadows' evil grin as he about to kill Starswirl. 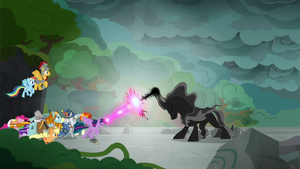 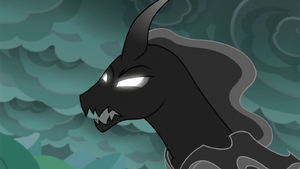 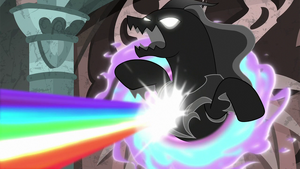 The Pony of Shadows' breakdown as he attempts to pull himself out of the portal. 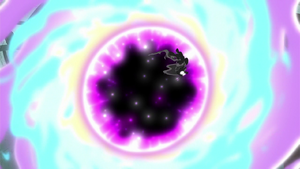 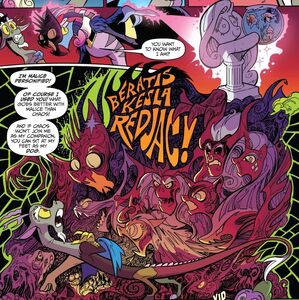 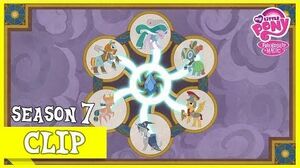 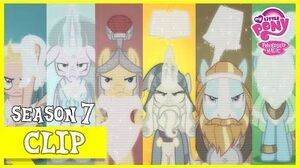 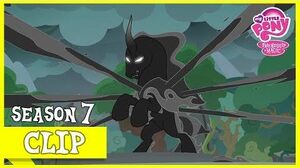 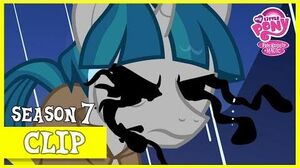 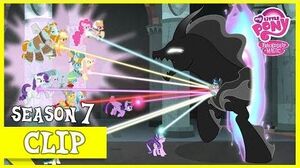 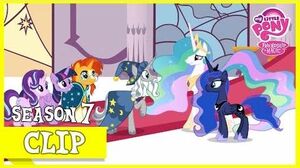 Retrieved from "https://villains.fandom.com/wiki/Pony_of_Shadows?oldid=4142999"
Community content is available under CC-BY-SA unless otherwise noted.