The Pope
His Excellency

Make money (succeeded for a while)

Fictionalized Corrupt Official
Jorge Mario Bergoglio, better known as Pope Francis, is a minor antagonist in Brickleberry, only appearing in the episode "Cops and Bottoms". He is a dark priest who works as the head of The Catholic Church and doesn't believe in his own religion and only plays the role of a pope for money. He is villainous for lying to over one billion people to take their money and trying to kill Woody Johnson for taking followers away from him.

In "Cops and Bottoms", Woody Johnson became a worldwide phenomenon when he got a hemerrhoid that looked like Jesus Christ and thousands of Christians, (mostly Mexicans) flocked to see it and pray to it. Eventually, he became so famous that he even got the attention of Pope Francis, himself, who called him into his church for a personal meeting.

When Woody met with Pope Francis, he admitted to him that the whole Jesus hemorrhoid was all a myth and it didn't really possess magical powers. Pope Francis admitted that he knew this and explained that his whole religion was false and he was just pretending he believed in it so that he could make money from his followers. Pope Francis was very upset that Woody was taking followers away from him by having Christians visiting him instead of the church. Pope Francis told Woody that because he was stealing his money, he had to die. Pope Francis took out a knife and prepared to kill Woody. Woody screamed in terror and then asked Pope Francis for an autograph so he could give it to his half-Mexican niece.

Pope Francis told Woody that first he would be cutting off Woody's hemorrhoid and then slitting his throat and got into a battle with him that Woody fought. Pope Francis finally grabbed Woody's pants and pulled them down, revealing the hemorrhoid to him. Pope Francis was so blown away by the beauty of the hemorrhoid that he backed up in awe and accidentally fell off the balcony, where he landed on the ground and died in a puddle of blood. 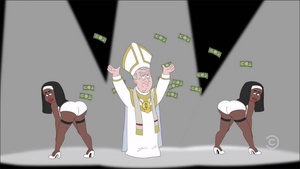 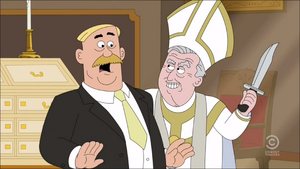 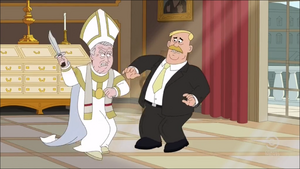 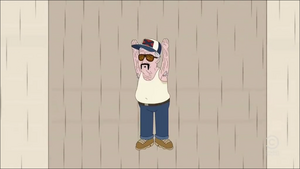