Stealing valuable objects he can find.

Thinking about his dreams.
Bossing around his partners.

Steal the Beanstar and make his dreams come true.
Become a super thief and be more rich than he can imagine (all failed).

Popple, or the "Shadow Thief" as he calls himself, is a wannabe super thief who dreams of getting rich quick. Popple makes his first appearance when the Mario brothers bump into him after they exited through a maze of barrels in the Chateau de Chucklehuck where they were after the secret of the brewery's world famous drink, Chuckola Cola. As the Mario brothers followed Popple after discovering him, they ran into his accomplice, Rookie (who was really an amnesiac Bowser). Engaging the brothers in battle, Mario and Luigi managed to beat Popple and the blank-minded Bowser. After defeating them, the brothers free the brothers and owners of the Chateau de Chucklehuck, Cork and Cask from barrels, after Popple and Rookie trapped them in there. Cork and Cask then teach Mario and Luigi the Mini Mario and Luigi Dunk techniques with their hammers. Popple and Rookie showed up again when Mario and Luigi encountered the founder of Chuckola Cola, Bubbles, who reveals the two trapped inside barrels to the brothers before summoning the Chuckolator to blast them away.

The brothers encountered Rookie and Popple again in the basement of Woohoo Hooniversity, where they were trying to steal the Beanstar. The two groups ended up fighting again, and even when using their own brothers move, Popple and Rookie still lost. Suddenly after the battle, the head of a Peach robot fell through the ceiling and played its recording of Birdo's voice that irritated the Beanstar so much, it bursted through the ceiling, making Mario, Luigi, Rookie and Popple grab onto it as it flew through the air. The Beanstar then divided into four pieces flinging all its passengers off. Mario landed with Luigi in Oho Oasis, while Bowser was flung to Stardust Fields, then used as revival power for Cackletta's spirit. Popple's landing destination is unknown.

Popple appeared again in Chucklehuck Woods, trying to get a piece of the Beanstar off a statue. The Mario Bros. fought him again, but this time without Bowser. Popple appeared again having made a base in Teehee Valley. After finding an unconscious Luigi in the desert, he took him as a prisoner to lure Mario to his base. After Mario freed Luigi, Popple attacked and introduced his new Rookie, Birdo, who had fallen hopelessly in love with him. After losing in battle, Popple blamed his defeat on Birdo and called her useless. Heartbroken, Birdo knocked him through the wall.

Popple was then sentenced to community service in Little Fungitown where he is last seen, and ironically, his supervisor calls him Rookie.

Popple eventually makes his way to Pi'illo Island in search for more valuables to steal. He is first seen attempting to steal from Pi'illoper's house in Wakeport, after a failed attempt to steal his artifacts. He is discovered by Mario and Luigi; while not recognizing them at first, he recalls that they look familiar to two others from the Beanbean Kingdom. He is later spotted in two tours, at Driftwood Shore and Mount Pajamaja. He leaves Driftwood Shore due to a lack of treasure, and at Mount Pajamaja he is kicked out by the Massif Bros. due to there being no room for him.

Back in Wakeport, Popple attempts to rob from Pi'illoper's house again from the back entrance. He is caught by the Mario Bros., but believes that they must be thieves as well. Popple decides to make the Mario Bros. his new Rookies and work together to defeat a Wiggler in the flower garden, mistaking him as a guard. However, after the Mario Bros. defeat the Wiggler, Popple quickly turns on Mario Bros. and fought against them, only to end up beaten as well. Afterwards, Popple discovers that Wiggler was no security guard and expresses his frustration by insulting the flower garden. Wiggler is enraged by Popple's insult and chases him away from Pi'illo Island. He states that he's had enough of the island and is not seen again.

Popple returns in this game with the same role as in the original, as well as with new appearances in the game's new sub-plot, Minion Quest: The Search for Bowser. It is confirmed that Popple and Bowser (who would become Rookie later on) first met in Hoohoo Village, where Popple stole food from the villagers, then tripping over and accidentally feeding the wounded, amnesiac Bowser while escaping with his loot. Bowser then starts following Popple, who is confused at first, but later takes Bowser in as his new Rookie.

Later at Chucklehuck Woods, Rookie goes missing and Popple chooses to ask Captain Goomba and his team where he went. However, the team quickly realizes that Popple was talking about Bowser and decides to fight him, a fight that he ends up losing. Rookie then finally returns, immediately concerned for Popple, and showing no regard for his minions.

Popple makes another appearance in Teehee Valley, where he is looking for a replacement partner, with several candidates including Birdo. Captain Goomba and his team find them, and Popple challenges them to a fight as revenge for the earlier ambush at Chucklehuck Woods. He ends up being beaten this time as well and Birdo drags the injured Popple away.

Popple is shown to be full of himself and genuinely convinced that he is a "Shadow Thief", despite his clumsy, incompetent nature. He also possesses a terrible temper, getting angry at the smallest of things and often childishly shouting at his minions after being defeated in battle. Additionally, he can be sneaky and backstabbing at times, best seen when he tricked Mario and Luigi into helping him defeat the huge but generally friendly Wiggler at Wakeport just to proceed with his schemes, then selfishly betrayed them but also ended up being pummeled himself.

The only instance of Popple's slightly more honorable side was when he agreed with Mario to move the Beanstar to safety at Woohoo Hooniversity and then bowed with him. 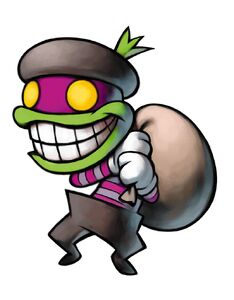 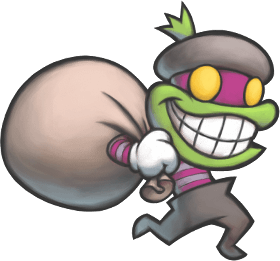 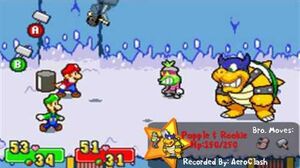 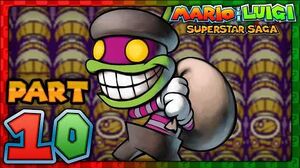 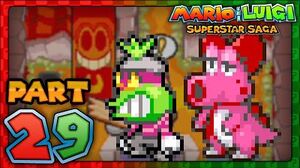 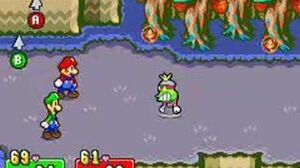 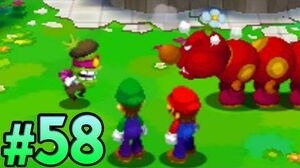 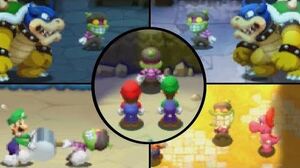