Kill Ant-Man and any other superhero that gets in his way (failed).

Supervillain
Porcupine is a supervillain in the Marvel Comics universe. He is an enemy of the following heroes: Ant-Man, Wasp, Fantastic Four, X-Men, Captain America, Nomad, The Defenders, Iron Man, Nighthawk, Hellcat, Moon Knight, Guardsman, Colleen Wing, Misty Knight, MACH-IV (Beetle) and the Dora Milaje. The Porcupine persona has been used by three individuals. They are Alexander Gentry, Roger Gocking, and William Bates.

Alexander Gentry was originally a scientist who worked as a weapons designer for the United States Army. He conceived the idea of designing a battle-suit in imitation of a porcupine: it would be covered with quill-like projections for defense. Moreover, it would be able to shoot its quills, or gases, flames, chemicals, paralysis-inducing pellets, or weapons from quill-like tubes, at an opponent. Gentry spends months working overtime to create his porcupine battle-suit. He is proud of his achievement when the suit was finished, and believes his invention is worth a fortune. Yet Gentry also believes that the government would pay him, one of its employees, virtually nothing for his creation. Angrily, Gentry decides to keep the porcupine battle-suit and to use it to become wealthy through crime. Thus Gentry became the Porcupine, one of the first costumed professional criminals of his generation.

Hank Pym, who was then the original Ant-Man, and his partner, Janet van Dyne, the Wasp, soon defeat the Porcupine while he attempted to rob a bank. However, the Porcupine succeeds in escaping. After Pym had also assumed the superhuman powers and identity of Giant-Man, Porcupine returns for revenge. During the resulting battle, the Porcupine consumes what he thinks is a Giant-Man growth medium, but which instead shrinks him to microscopic size.

Eventually, however, the capsules' effect wore off, and the Porcupine, again at his normal size, is among the many costumed menaces assembled by Doctor Doom to disrupt the wedding of Reed Richards and Susan Storm.

His self-confidence still shaken by his failures in battling Giant-Man and the Wasp, the Porcupine eagerly accepts the invitation of Count Nefaria, a powerful figure in the criminal Maggia, to join his group of costumed agents. Among Nefaria's agents are the original Eel (Marvel), Plantman, the Unicorn (Marvel), and the Scarecrow, with all of whom the Porcupine would ally himself in the future as well. The Porcupine and the other costumed agents aid Count Nefaria in his attempt to hold much of Washington D.C. for ransom. However, the X-Men thwart Nefaria and his agents. Once again, the Porcupine escapes being taken prisoner, and he blames the failure of the blackmail scheme on Nefaria and the other agents. Gentry comes to suspect that in fact, he himself was inadequate for the role of being a "super-villain" battling superhuman opponents.

It is not known what the Porcupine did between the end of this venture and his enlistment as a member of Batroc's Brigade. As a Brigade member, the Porcupine unsuccessfully battles Captain America. Months later, the Porcupine and his allies, the original Eel, the Plantman, and the Scarecrow, go to work for the masked criminal mastermind who calls himself the Cowled Commander on his crime spree. Once again, the Porcupine clashes with Captain America but is defeated. Convinced that they are failures, Gentry and Leopold Stryke, who was the original Eel, seek guidance from the Celestial Mind Control movement, which is secretly masterminded by the alien Nebulon. Nebulon pits the Porcupine and the Eel against his foes, the Defenders, who defeat them both. The Porcupine is then employed by the android Zodiac to participate in a crime spree. Porcupine is then employed by Justin Hammer to battle Iron Man.

Later, the Porcupine and a small group of confederates invade a major Manhattan hotel to steal the valuables in its safe. The Porcupine decides to rob the wealthy attendees at a fashion show in one of the hotel's ballrooms. The show is being given by fashion designer Janet van Dyne, who is also the Wasp. Henry Pym, who now uses the costumed identity of Yellowjacket, is also present, as is Kyle Richmond, the adventurer called Nighthawk. The heroes swiftly defeat the criminals. Porcupine feels humiliation at being taken down by opponents the size of insects. The Porcupine next turns up as one of a large assemblage of costumed criminals organized by the original versions of Libra and Sagittarius of the android Zodiac. This time the Porcupine is defeated by the Hellcat during a battle between a number of the criminals and a group of adventurers operating under the auspices of the Defenders.

The Porcupine goes to prison but is soon released by minions of Justin Hammer. The Porcupine agrees to provide Hammer with half the proceeds from his criminal activities in exchange for Hammer's financial support. The Porcupine is among the small army of costumed criminals whom Hammer sends to attack Iron Man when the latter turned up on Hammer's enormous "houseboat" headquarters. Iron Man defeats all of these criminals. Porcupine is soon fired by Hammer. Tired of his long string of defeats, Gentry decides to give up his career as a costumed criminal and live off the millions of dollars he expects to receive by selling his battle-suit. Gentry totally redesigns his porcupine battle-suit, making it far deadlier than before. He enters into negotiations with the subversive organization called the Secret Empire to sell them the suit. The Empire requests proof of the battle-suit's capabilities, so Gentry attempts to prove it in battle against Captain America. Captain America and his ally Nomad defeat the Porcupine, and Gentry is returned to jail.

In prison, Gentry vows never to be defeated again, and to ensure that, he decides never to put on the Porcupine battle-suit again. Gentry is soon released from prison under unknown circumstances, and he sets about once more to try to sell the battle-suit. He fails to find any serious buyers. Gentry tries to sell it to the Secret Empire, but is attacked by Nomad. When most of the heroes were missing due to them partaking in Beyonder's Secret Wars, Porcupine joins Batroc and some other villains in fighting Moon Knight and Guardsman. Porcupine later joins a short-lived version of the Lethal Legion in their mass-attack on New York's superheroes. He is knocked aside by a thrown printer and hit by a stray blast from Unicorn.

Porcupine and a number of costumed criminals appear as witnesses in court when the Trapster decides to sue the Tinkerer for consumer fraud. Some criminals like Porcupine and the Taskmaster appear on behalf of the Tinkerer, and a brawl ensues when Taskmaster tells the court that the problem is with the users and not the weapons. A huge melee ensues and She-Hulk is forced to intervene when the brawl crashes into her case in court. During the fight, She-Hulk asks the Porcupine "Aren't you supposed to be dead?" Porcupine replies "You're right; I am" and collapses dead on the floor. Whether or not this occurred on Earth-616 is a matter of debate.

Doctor Faustus used holograms of the Porcupine, along with ULTIMATUM agent Vladimir Korda, the original Scourge of the Underworld, and MODOK against Captain America in Skull House. Faustus is apparently attacked by the ghost of the Red Skull, then believed to be deceased.

Arnim Zola created numerous proto-husks from DNA samples of deceased heroes and villains including Porcupine whom he called his Corpse Corps. It is unknown how he obtained a sample of Gentry's DNA. These resurrected husks would secure riches to fund his genetic experiments but come into conflict with Deadpool after Animus (Marvel) steals some files from him. The merc with a mouth shoots the Turner D. Century proto-husk in the knee, who in turn accidentally sets the Porcupine on fire with his umbrella flamethrower. Deadpool destroys most of the proto-husks and defeats Arnim Zola.

A person using the Porcupine identity and battle armor appeared in Daughters of the Dragon #3. Porcupine and other villains are attacked by Colleen Wing and Misty Knight, who were seeking information in the bar. Porcupine is quickly felled and thrown into Doctor Bong.

During the Civil War event, he is apprehended alongside Eel in San Francisco by the three rookie Beetles and their leader, MACH-IV. This group forms Thunderbolts Team A.

The Porcupine appears again in Thunderbolts #107 alongside the likes of the Eel, Doctor Octopus, Boomerang, Whirlwind and others who in separate teams of the new Thunderbolts face massive hordes of empowered people. These were everyday people empowered by an out of control cosmic source of energy called the Universal Well Spring.

During Doctor Doom's war with Wakanda over their Vibranium supplies, Porcupine was employed by former Damage Control worker Walter Declun in Mexico to defend one of Doctor Doom's outposts there from the Dora Milaje and the Fantastic Four.

Porcupine then begins attending Super Villain Anonymous meetings held in the basement of St. Jude's Church. Some time later, Porcupine is forced into committing crimes for his wife, Olivia, who had retreated to a safe haven for physically and emotionally battered women because she could not take the stress of Roger's lifestyle. She uses their daughter, Kalie, as a hostage to force his compliance. After his loved ones are located, Gocking decides to reform, and begins traveling across the United States, solving crimes with Spider-Woman and Ben Urich. Once Spider-Woman's baby Gerry is born, Roger also becomes his nanny.

Hoping to sever his criminal ties, Porcupine asks Hobgoblin to release him from his franchise contract and let him buy the Porcupine equipment outright. Instead, Hobgoblin tries to kill Porcupine with a Pumpkin Bomb so that he could use his equipment for future franchisees. Roger happens to be wearing one of Spider-Woman's high-tech pregnancy outfits, enabling him to survive the bomb, and he begins an extramarital affair with Spider-Woman. The two continue looking after Gerry, whom they discover also has Spider-Woman's powers.

A relatively normal teenager before manifesting his powers, Billy inadvertently killed a group of human patrons at the Cafe Des Artistes who were harassing the mutant waitress Sylvie, on whom he had a crush. Bates wound up taking Sylvie hostage and was successfully talked into surrender by Bishop but was abruptly shot dead by the assassin Popova to avoid political ramification due to Bates' murder of several humans.

In the House of M reality, William Bates was killed by Shashenka Popova when she stabbed him when William was trying to prevent her from fleeing the scene of a Sapien League attack.

In Ultimate Spider-Man episode "Doomed," there is a female version of Porcupine named Lady Porcupine that is on the S.H.I.E.L.D.'s Most Wanted database and had been defeated by Spider-Man.

Porcupine without his mask (Alexander Gentry) 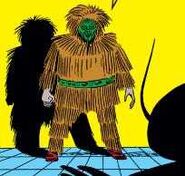 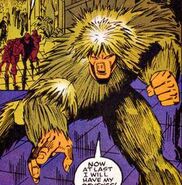 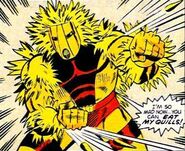 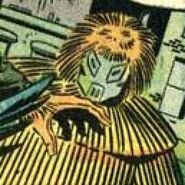 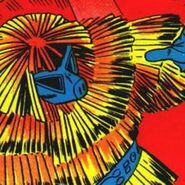 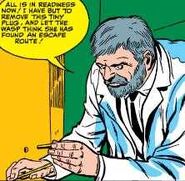 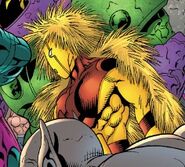 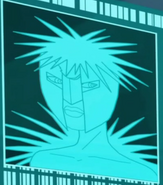