Monotoli's adviser
Giygas' right-hand man (and possibly holding the upper hand)
Founder and leader of New Pork City and the Pigmask Army
Ruler of Tazmily Village and the Nowhere Islands
Member of the Subspace Army (in Super Smash Bros. Brawl)

Destroy Ness and his friends (in Earthbound; failed).

Responsible for the deaths of Hinawa and Claus

Porky Minch (also known as "Pokey" due in part to a translation error) is the secondary antagonist of EarthBound and the main antagonist of Mother 3.

His first appearance in EarthBound displays him as the cowardly, yet, incredibly obnoxious next door neighbor to Ness, the protagonist of the story, who he later confronts from time to time throughout the whole game, constantly being a thorn on his side. As the story progresses, so does Porky in power, extending from a high priest of Carpainter's Happy Happist cult, to Monotoli's adviser, then to become Giygas' right hand man, and quite possibly even be the more superior during the final boss battle. In Mother 3, he becomes the nefarious king of the vast Pigmask Army and the Nowhere Islands.

After a meteor strikes on a hilltop in the small town of Onett in the middle of the night, Porky investigates the site, only coming up short as the police will not let him. After telling Ness to stop "rubbernecking", he returns home, only to be woken up by Porky's desperate knocking. After confessing that he had lost his younger brother, Picky, near the site, he pleads for help from Ness to find him before his parents come home.

Once they find him, an insect named Buzz Buzz appears from the meteor and tells them that a great evil is coming, and that a group of heroes will save the world, Porky convincing himself that he isn't one of them. After fighting a Starman, Ness returns Porky and Picky home and he isn't seen for a while.

Porky is next seen as the high priest of the Happy Happyist Cult led by Carpainter, kidnapping Paula for a human sacrifice. When the cult is disbanded, he and his father become business consultants for Geldegarde Monotoli in Fourside, causing even more trouble for the heroes. When confronted by Ness, Porky escapes in Monotoli's helicopter and crashes in Deep Darkness, again disappearing for a while. He is finally seen in the Cave of the Past alongside Giygas itself, fighting inside a spider-mecha (identified as "Heavily Armed Pokey").

In the final moments, he releases Giygas from the Devil's Machine, but Paula's prayers destroy the evil force once and for all, forcing Porky to escape through time. His last message in the epilogue of the game came as a taunting letter to Ness from Picky saying "Come and get me, loser! Spankety, spankety, spankety!".

In Mother 3, Porky returns as the king of the vast Pigmask Army, a whole army of brainwashed soldiers with pig-shaped masks and the undeniable tyrant of the Nowhere Islands. While he is not introduced in name until the final chapter of the game, Chapter 8, his presence is noticeable in the first chapter by the introduction of the Pigmasks, terrorizing Sunshine Forest of Tazmily Village, the home of the main protagonist, Lucas. Throughout the whole game, the Pigmasks have spread their influence across the Nowhere Islands, modernizing the land to the point in Chapter 7 where it is mostly ubiquitous. In addition to kidnapping the soldiers from various time periods, he kidnapped Dr. Andonuts, from the time of EarthBound, to construct his machines and weaponry in the Chimera Labs, creating the grotesque animals called "chimeras" that are found all throughout the game, and also tricking the Tazmilly Villagers into becoming new soldiers for his army and new citizens of New Pork City while also loving him unconditionally as their rightful ruler with the usage of Happy Boxes and the "Nice Person Hot Spring", brainwashing devices that come into play later in the game.

After Lucas' mother, Hinawa, dies from a Mecha Drago, a chimera made by the Pigmasks, his brother, Claus, goes missing, attempting to avenge his mother, failing miserably. The Pigmasks would later find his body and brainwash him into becoming their general, in pursuit to pull the Seven Needles to awake the Dark Dragon and destroy the world (or rather, reset it to Porky's image). In Chapter 8, it is revealed that Porky was the mastermind behind all these incidents, and the race to pull the Seven Needles would be directed to his city, New Pork City for the heroes.

Up to this point, all of the Tazmily Villagers have moved in to New Pork City, while Porky awaits Lucas and company in the Empire Porky Building for the grand finale to pull the last and final needle. After repeatedly taunting the heroes to precede to the 100th and final floor in the building, they finally meet the unseen dictator. Descending down the vines of the final floor, it is clearly evident he has changed a considerable amount from his last appearance in EarthBound. He is expressed in game as coughing, wheezing, and gasping throughout his whole speech to the heroes, possibly due to of his extreme amounts of time-travel. His body aged into a fragile, old man, while still keeping his twisted childhood mentality, albeit warped due to the extreme amount of year spent time traveling, back from EarthBound. He confesses that all of the actions laid out to Tazmily Village, and to the Nowhere Islands, were all out of sheer boredom and also due in part to it would "be more thrilling". He then transports the heroes to the final showdown, under the Empire Porky Building via a trap door.

Lucas and company continued their journey underground, until Porky appeared and blocked the way, resulting in a final showdown. during the battle, he professed his goal is to remove all life from the world, leaving only the Dark Dragon and himself. Porky then assured his foes that even if the Dark Dragon were to destroy everything else, his immortality would allow him to see it all through. After his mech ran out of power, Porky decided to isolate himself inside the Absolutely Safe Capsule; a giant capsule specifically designed to be absolutely safe. However, he forgot that the capsule's creator, Dr. Andonuts, told him not to use it yet, as once the capsule is sealed shut it can never be opened again, thus forever trapping Porky inside it, unable to leave, unable to die, and unable to accept defeat.

In Super Smash Bros. Brawl, Porky is a boss fought in the Ruined Zoo stage after escaping his Pig King Statue. After Lucas escapes, Ness appears and destroys it with a PK Flash. Porky then appears from inside the statue and attacks using his bed mecha (to which he is bond by a glass vial, presumably the Capsule). His attacks involve a multiple stab with his mechanic claws, many kinds of lasers, and Mecha-Porkies that detonate with proximity. Even though he keeps his pace, both ultimately defeat Porky, whose mecha falls to the ground in malfunction. He returns in the Great Maze area, where he must be fought again to open the door to Tabuu. It is unknown if Porky is working for the Subspace Army, but it is said by many sources that he is actually a general under Tabuu.

While his whole personality may be just one big theory, he has a few characteristics that can be pinned down anyway. In his first appearance in EarthBound, it is clearly evident that he would be a nuisance, even later in the game for the heroes. But once the Mani Mani statue intervenes, which is the corrupting and evil influence of Giygas, he became much more insidious and troublesome (not to mention more irritating) to the heroes as the story progresses, taunting every step in the way. Be it either from temptation and opportunity or from the corruption of the Mani Mani statue, he gets more malicious and malevolent, to the point where he is serving, or even controlling, Giygas in the final boss battle to destroy the heroes once and for all. After disappearing for the last and final time in EarthBound, he states that he and Ness will meet again, adding in a "So now which one of us do you think is the cool guy?!", giving a sort of insecurity vibe.

In Mother 3, aged from the conspicuous amounts of time-traveling, he kept his immature mentality while also having the experience of an old man, abandoning any possibility of forgiveness and accepting his evil fate. As if he hadn't gone mad at the end of EarthBound, he has gone even more insane in Mother 3, to the point where he laughs like a madman in every dialogue he utters. When he isolated himself in the capsule, Porky apparently still believed that he'd win, as when you examine Porky during the end, it says that it "wobbles with glee".

It is unclear whether or not Giygas or Porky is in charge during the boss fight with the two. While Porky does seem to have the upper hand when turning off the Devil's Machine and driving Giygas to the point of irrationality, we're not sure if this was intentional. For all we know, it couldn't have been.

It is also unclear whether or not he has been corrupted by the Mani Mani statue since the start of the game or not. If he wasn't, he became willfully evil a his own expense. This is potentially supported by the fact that Porky was still evil during the events of Mother 3, which took place long after Giygas' death.

Given very little to no backstory before the start of EarthBound, we can only infer whether or not Porky's parents set him off toward the path to evil. It is evident that abuse does happen in his household, but the player can take it either comically, as in slapstick, or something more serious. Even the creator does take note of this, stating in an interview that "he has pretty bad parents". But why his younger brother didn't turn evil is anyone's guess.

Even though it is incredibly vague as to whether or not he and Ness were in anyway friends, there are subtle hints in both EarthBound and Mother 3 that Porky did think he was, in a odd kind of way, whether it be from the references to Ness' adventure in EarthBound, to the fake apparel and weaponry used by him in New pork City or to even the "precious" Friend's Yoyo in his playroom; as though he was worshiping him in a sense.

In Earthbound, in Ness' Magicant, the realm inside his mind, as the game states, Ness believed that Porky's actions before the confrontation with Giygas, was due in part of him being envious of Ness the whole time. 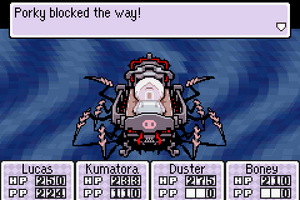 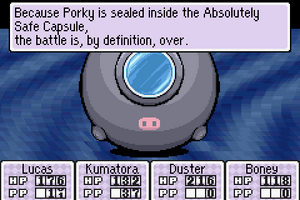 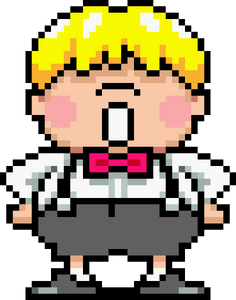 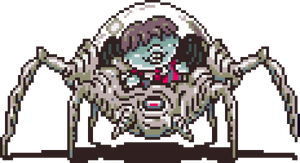 "Heavily Armed Pokey".
Add a photo to this gallery

Retrieved from "https://villains.fandom.com/wiki/Porky_Minch?oldid=2771368"
Community content is available under CC-BY-SA unless otherwise noted.