Poseidon is one of the Mythos Cyborgs modeled after the Greek god Poseidon. He is a minor antagonist in the "Mythos" arc of Cyborg 009.

Poseidon participated in the first battle against the 00 Cyborgs alongside his fellow Greek Gods. He later retreated when Artemis appeared to interrupt the battle.

Poseidon fought against the 00 Cyborgs again when they returned to Magma Island. He was killed when Dr. Gaia's reactor overheated and caused the island to collapse, with Poseidon being caught in a lava wave. 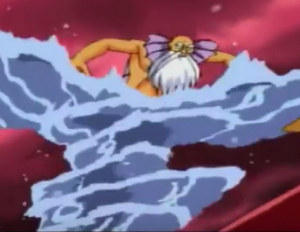 Retrieved from "https://villains.fandom.com/wiki/Poseidon_(Cyborg_009)?oldid=4193959"
Community content is available under CC-BY-SA unless otherwise noted.