Put an end to the madness in his town (failed).

Carry out all of his errands during the week.
Escape Paradise.
Find his lost dog Champ.
Kill The Bitch.
Get gas for his vehicle.
Find his trailer. (all succeeded)
Learn the Meaning of Life (Oh Sir! The Insult Simulator(Dubiously Canon)) (Dependent on player choice

Postal Dude is depicted as a middle-aged tall, thin man sporting a soul patch and red hair. He is always seen wearing sunglasses and a long trench coat whose color varies between games, as well as a t-shirt with a stamp of an alien. In Postal, he has much longer hair and now has fingerless gloves. In Postal Redux, he is shown to have a red button-up shirt. In Postal 4, he wears a t-shirt with a monkey on it and wears a purple bathrobe. In the Postal 2 beta shown at E3 2002, the Postal Dude had no glasses, exposing his reddish eyes, and he was much taller and thin. In Postal and Postal Redux, the voice heard in gameplay played by Rick Hunter isn't the Postal Dude himself, it was confirmed to be a demon in his head commenting on his killing spree. This is verifiable by the fact that within the original game files, Hunter's voice clips are labeled as "demon".

While in the original game, Postal Dude appears to be nothing more than a melevoyant psychopath who hates everyone and everything, the remake is very different. When played on harder difficulties, it is shown that Postal Dude actually appears to be a paranoid schizophrenic who is having some form of a schizophrenic attack, believing that he is acting in self-defense and that the world is out to get him.

In Postal 2 onwards, the Dude is shown as an antisocial and reclusive loner who is just minding his own business. On the surface, he is a very easygoing and imperturbable guy, usually not minding the stuff happening around him and constantly making unflattering and sarcastic remarks about them. Despite all that, he also displays extreme sociopathic tendencies, in particular his penchant for bouts of murderous violence against anyone he comes across for a variety of reasons, and sometimes for no reason at all. He tends to view these violent acts in a very blasé fashion (like he doesn't care), or with wry observations ("it's like bowling, only cooler!"), sick humor /jokes ("Have a nice day!", "edged weapons -- someone could lose a limb...hehe, yeah!") Or cold self-reflection ("Guns don't kill people, I DO.") He also loves his dog Champ dearly, going to great lengths to save him on both expansions of the second game. Despite having no prior experience with firearms, he is shown to be very skilled with them, even able to improvise on the spot.

However, it is interesting to note that in Postal 2, the Dude is only as violent as the player wants him to be, as the majority of the missions can be completed with or without violence. However, it is usually simpler to take the former route, as the pacifistic solutions often require money, which is very scarce, or the player to avoid confrontation with enemies; also, if the player clears the game with a perfect pacifist run, they are awarded with an extra message in the end which says "Thank you for playing, JESUS." as a way to (almost mockingly) congratulate the player. However, given the sequels and the nature of the series, it seems that the more destructive way is the "canonical" one.

However in Postal III's introduction, the Dude says that he "hates that f***ing name". When the announcer asks him if he has a real name, he replies with "Uh, I forget. Kids, don't do drugs".

Postal Dude in the gimp outfit. 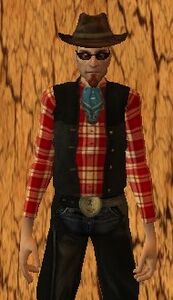 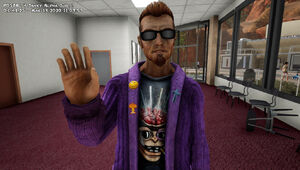 The Postal Dude's new design in Postal 4: No Regerts.