Olive the Other Reindeer

Cancel Christmas, so that he can stop carrying extra mail.

Stop Olive from saving Christmas
Get revenge on Santa Claus for putting him on the naughty list (all failed).

The Postman is the main antagonist of the 1999 children's Christmas special Olive, the Other Reindeer.

He is a cynical, greedy and evil mailman who despises Christmas because of all of the extra mail that he has to carry. He also holds a hateful grudge against Santa Claus for putting him on the naughty list during his childhood. He would stop at nothing to get rid of Christmas.

He was voiced by Dan Castellaneta, who also played Nick Vermicelli and Mr. Mysterio.

The Postman first appears when Olive meets him on her way to the Bus Station. The Postman was pleased of hearing about Santa Claus cancelling his Christmas Eve flight because Blitzen broke his leg during flying practice, but Olive convinces him that she was called by Santa to be his replacement Reindeer (although he really said "all of the other reindeer"), but the Postman completely doubts it. After he sings a song about how much he complains about Christmas and wants to not happen, Olive heads off to the Bus Station to catch a ride to the North Pole straightaway.

Later at the Bus Station, the Postman follows Olive and captures her and tells everyone that Olive is wanted on several counts of mail fraud, such as "licking self-adhesive stamps and not mailing early for the holidays". However, a penguin named Martini rescues Olive by rolling pens on the floor causing the Postman to slip on them allowing Olive to escape and allowing her and Martini to be able to get on the bus safe and sound. While they were on the bus, the Postman follows them in his mail van. The Postman then pulls up beside the bus, but Martini folds a paper airplane which he throws out the bus window and hits the Postman right in his ear, causing him to lose control knocking his mail van off the road.

Later on at Arctic Junction, the Postman arrives and disguises himself as a waitress. After finding Olive in a diner, he lies telling her Santa is waiting for her outside to give her a test flight. After the Postman lures Olive outside, he then takes off his disguise and grabs her and throws her into his mail van capturing her. While he drives away with Olive locked in his van, Olive notices some mean letters to Santa that the Postman wrote to make Santa think that there are kids that hate him. However, Olive finds a package that is addressed to her from "Deus Ex Machina". The package is a metal file that Olive uses to escape.

After the Postman arrives at the North Pole, he then delivers his fake mean letters to Santa. After Santa reads them, this causes him to suggest that it is probably time to retire, but Olive tells Santa that the mean letters really came from the evil Postman. However, after Santa suggests that he is going on his flight after all thanks to Olive, the Postman steals Santa's sack of toys while Santa was getting his sleigh ready. After Santa, his reindeer and Olive take off, the Postman meanly tells Santa that he is still out of business since he stolen all of his toys. He then captures Martini as well and starts digging through Santa's toy sack taking out a train set that he wanted when he was a kid, and tells himself, "That was the year Santa started putting me on his Naughty List.".

However, when Santa, his reindeer and Olive arrive at the first house, Santa discovers that they have got the wrong sack, which was full of junk mail. Olive discovers that the sack of junk mail belonged to the Postman and they take off to go after him to get the sack of toys back. Olive manages to find the Postman's mail van and also finds out he also captured Martini. After Santa lowers his sleigh down towards the Postman's van, Olive opens the van's side door and orders the Postman to give back the presents. Olive and the Postman then get into a big fight. However, Martini uses a jack-in-the-box, which scares the Postman causing his van to lose control and skit off the road into a snowdrift. Olive then rescues Martini and manages to get Santa's sack of toys back. The Postman then gets tied up and Santa thanks Olive for helping get the toys back from him.

Later, back at the zoo, Martini puts the Postman in the penguin exhibit in his place and Martini becomes the new Postman while the evil Postman was given a Christmas Present full of fish by the other penguins, much to the Postman's dismay. 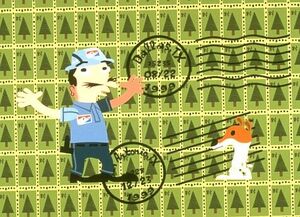 The Postman explaining to Olive why hates Christmas.