The Pot Centipede is fought in Agrabah. Jafar has captured Jasmine and, as he escapes with her to the Cave of Wonders, he summons the head and rear of the Pot Centipede. The two parts are immobile without Pot Spiders. Once they attach, it can move. The Spiders are positioned as legs between the head and the rear. Its rear antennae are electrical and can zap Sora.

The Pot Centipede's main body is comprised of several Pot Spiders with two legs each, as opposed to the normal four. Its rear end is blue and sports two short, dark blue "tails". Its head is round, blue, slightly squashed, and sports glowing yellow eyes, two twisted antennae between its eyes, two black-tipped mandibles, and a Heartless emblem on its forehead.

The Pot Centipede's name reflects its appearance, which resembles a real-world centipede with its segmented body comprised of Pot Spiders. 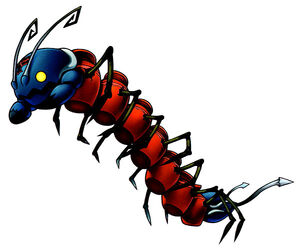