Brainwash Meg Griffin into adopting all the cats in the neighbouhood and turn her into a cat lady (succeeded, then failed).

Pouncey is a minor antagonist in Family Guy, being the main antagonist of the episode "Family Cat".

She at first appeared as a stray cat looking for a home, but as the episode goes on, we learn that she's a manipulative, highly intelligent, and sophisticated threat that later brainwashed Meg and attempted to murder Brian.

She was voiced by Tracie Thoms.

Pouncey has gray and white hair with soft and poofy fur. She has a long gray tail with black eyes and a mouth full of teeth.

Pouncey approaches the Griffin House as a street cat but is actually plotting to invade the Griffin Household. Brian suspects that Pouncey is evil as every cat is evil and he's actually right. While Meg is talking to Pouncey she starts dancing with Meg and brainwashes her and says "You're mine now, Meg". When Brian confronts Pouncey she reveals that all cats can talk because they are not as stupid as dogs, she reveals her evil plans and Brian is left shook. No one in the family believes him and when he heard that Pouncey is turning Meg into a cat lady he weapons up and goes to the house. He finds Meg and Meg says that all the years that she was miserable, Pouncey was the greatest thing in her life. Pouncey then orders the other cats to attack and kill Brian, Brian overthrows them all and before Pouncey can make Meg a full cat person Quagmire shows up and puts on the sweater. Pouncey and the cats listens to Glenn Quagmire as he sings and defeats them all.

Pouncey reading a book with Stewie

Pouncey at a talent show

Family Guy: The Quest for Stuff 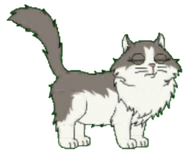 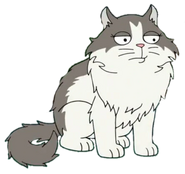