Brutal Fighter
Pounder is a major antagonist in Dinotrux, appearing in Seasons 3-5. It is a Poundersauroluphus, a species which combines aspects from a Pile driver and a Parasaurolophus; they are often referred to simply as Pounders.

Pounder was trapped by the Dinotrux so that they could transport it out of the Crater, but it proved too clever for this tactic. Skya then attempted to defeat it through brute force, but found that she could never overcome the creature's strength and speed; however, she realized she could turn its aggressive nature against it. To that end, she lured it into a canyon and deliberately jumped off the edge with the Pounder in pursuit, but saved herself using her hook while it fell to the ground. However, even this proved insufficient to halt the Pounder, which continued to haunt the Crater.

Some time later, Pounder joined in  the group assault on Ty himself. Despite Skya and the others coming to their friends aid, Pounder and his teammates were able to knock them off the bridge and into the river below. By the events of "The Return" they had seized complete control of the Crater, with Pounder gleefully smashing various projects of the Dinotrux. However, the returning heroes were able to rally the other Dinotrux in the Crater to their aid and bring them together to ambush the villains at the bridge, forcing them to flee.

In Dreadtrux, Part 1 and Dreadtrux, Part 2, after engaging in a fight between D-Structs, Blayde and Splitter, which resulted in them going their separate ways, a Poundersaurolophus (either Pounder or a different one) inadvertently awakened the Dreadtrux by pounding the ground near where it lay in hibernation, and was later knocked aside though otherwise left unhurt as it began to rampage. 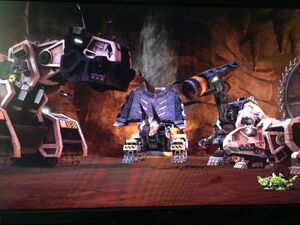 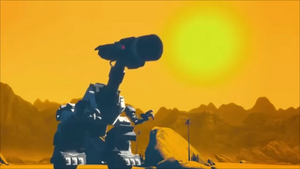 An unknown Poundersauroluphus in a flashback (possibly Pounder).