Praetorian Xenomorphs are a part of evolutionary step before transition to become Queen in the life cycle of the Xenomorph species, and are the most widely acknowledged form of Xenomorph to emerge from expanded universes of both Alien franchise and AVP franchise. Praetorians function as guards to their Hive's Queen or Empress and unlike other Xenomorph types, Praetorians rarely operate outside of or leave their Hive grounds. They are among the largest and most powerful Xenomorph strains, aside from Queen/Empress/Matriarch classes. In general (most of time, not always), Praetorians' heads resemble that of Queens'.

Up until their re-introduction in Aliens: Fireteam that marks their official debut in mainstream Alien franchise, Praetorian Xenomorphs have gone on to be a staple feature of the various video games based on the AVP universe in addition of Dark Horse Comics' Aliens: Defiance, Aliens: Defiance - Extravehicular, and Aliens: Rogue, first appearing in the 1999 video game Aliens versus Predator.

Majority (there are always exceptions to the rule in all organisms) of Praetorians' most noticeable feature is their large and wide head crests, similar to that of a Queen, which they will often utilize to ram their preys/targets/intruders in a charging attack. Another similarities include longer and bigger dorsal back tubes that end with sharp point, titanic size (able to stand at least 10 feet tall towering lesser Xenomorphs yet still smaller than Queens in size), and proportionately great strength and resilience thanks to their thicker exoskeletons that even bulletproof in some cases. But unlike Queens, Praetorians do not possess a second pair of arms on their chests and sport metallic teeth not unlike lower Xenomorph castes. They are capable of crushing entire squads of human marines single-handedly and are more than a match for skilled Yautja in close combat. Despite their gargantuan size, they are almost as fast and agile as their smaller Xenomorph siblings. But the big size comes with a price: Praetorians are always seen in a permanent bipedal position, and they cannot scale walls or ceilings because of their heavy body bulk and weight. Gaining greater strength, endurance and resilience at the expense of dexterity.

Praetorians can spit acid in far larger quantities than other Xenomorph spitter types such as Drones and Runners, as well as using their claws and long blade-tipped tails as slashing and stabbing weapons, making them deadly at any range. Most Praetorian types are dark in color, typically black but sometimes blackish-blue, very rarely other colors.

As seen in AVP (2010), a Warrior/Drone Xenomorph can evolve into a Praetorian if exposed to Royal Jelly.

During the molting process of transition from a Warrior/Drone to a Praetorian after consuming sufficient amount of Royal Jelly, the initiate creature emits pheromones that is different from other strains and thus in turn make other strains of hives extremely hostile to the creature-in-transition; this process would result in the deaths of most such individuals. However, for those that survived and escaped (only the strongest and most resilient live long enough to escape, of course), the pheromone would begin to initiate physical changes/alteration in the individual, causing them to grow into the Praetorian form. Once the change is complete, the pheromone would cease to be produced and the new Praetorian would return to their Hive and take their place beside their Queen.

The most notable instance of this is Specimen 6/Number 6 in the video game Aliens vs. Predator (2010), who evolved into a queen from the Praetorian stage via. consuming lots of royal jellies throughout its ill-fated journey to locate and free The Matriarch. Number 6 molted into the Praetorian at an unknown point; after being captured by Weyland-Yutani Combat Androids and Dr. Groves when it was in unconsciousness caused by the death of The Former Queen (The Matriarch). Then after consuming lots of royal jellies throughout the gameplay, The Specimen 6 escaped molted/evolved into the Praetorian and slaughtered the Combat Androids. Number 6 then captured Dr. Groves alive and after that, Number 6 molted/evolved into the Queen.

In Aliens versus Predator: Extinction, an ordinary Ovomorph will molt into the eponymous variant with green and charcoal black coloration that spawns a Praetorian Facehugger. Sporting blood-red skeleton which affect a more scorpion-like appearance than their ordinary counterparts, Praetorian Facehuggers are stronger (able to subdue even particularly hardy Yautja victims including ones trained in killing Facehuggers), able to shrug damages better before impregnating a victim, and able to travel farther from the Hive. The price of this evolution is their chestbursters' inability to perform DNA reflex that allows them to take some of their hosts' physical traits, effectively making them "pure" unlike lower castes.

Praetorians can also evolve into either Ravager Xenomorph or Carrier Xenomorph.

Carriers are alternate life cycle of Praetorian that purposed for field infestation. Should be noted that in spite of majorities of xenomorphs could subdue their foes/preys that can be used for impregnation by facehuggers, it does not guarantee that they always succeed in doing so, as sometimes they ended up killed before able to took the said potential hosts back into their hive. Other problems would be that the facehugger themselves (though able to travel from the hive into the outside world) are vulnerable and can be easily killed. Carriers' presence within the hive would could counteract this, as they could bring around six to twelve facehuggers for instantly subdued potential hosts on the field without truly need for bring them back into the hive.

Carriers resemble Drones in appearance, but are thrice taller and lack clawed fingers. Instead, they possess a single blade on each arm much like a praying mantis. Also, they possess pairs of dorsal tubes that seemingly have joints on them, and generates nutrients for facehugger to feed on board. Carriers also use these tubes to propel the facehuggers on their foes' face like a catapult. Had Carriers facing enemies that cannot be infested, whether while carrying facehuggers or not, they uses their blades instead.

Ravagers are presumed to be the Xenomorph evolutionary response to the heavier military equipment brought to bear by more advanced species. This massive beast towers above other Xenomorphs, short of the queen, and has a uniquely terrifying presence in battle. Instead of just having hands, its upper extremities terminate in "hull blades" capable of easily slicing through even advanced armors and metals. Their appearance are depicted as a taller and more muscular version of warriors.

Unlike other forms of Xenos, the purpose of a Praetorian molting into one of these are solely for combat alone, as it can only kill their foes outright instead of subduing them: Ravagers' attacking methods often in form of beheading any enemies that they encountered. 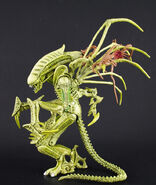 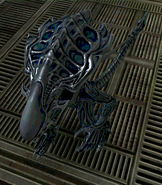 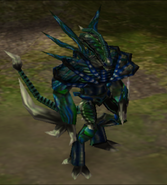 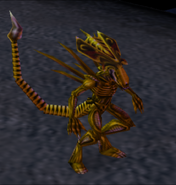 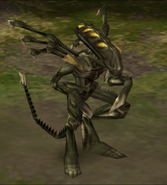 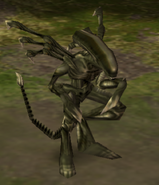 Retrieved from "https://villains.fandom.com/wiki/Praetorian_Xenomorphs?oldid=4317634"
Community content is available under CC-BY-SA unless otherwise noted.