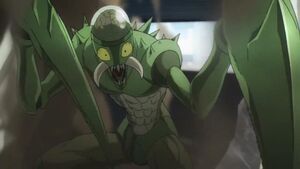 Kamakyuri (in Japanese: カマキュリー, Kamakyurī) also known as Praying Mantis is a minor villain from One Punch Man.

Praying Mantis one of the bio-engineered soldiers from the House of Evolution, and allegedly one of their strongest members according to Frog Man. He is a mantis-like humanoid with his exposed brain protected by glass.

Sent by the group to capture Saitama, Praying Mantis interrupts a conversation between Saitama and Genos by busting through Saitama's apartment's roof. He starts introducing himself, but is promptly attacked by an angry Saitama, who crushes his head with a single punch for ruining his roof.

Praying Mantis is a tall humanoid creature with many insect-like qualities. He is encased in a segmented, thorny exoskeleton, with clawed feet and serrated, scythe-like forelegs, similar to those of a praying mantis. Mandibles protrude on each side of his mouth, and the top of his skull is transparent and reflective, revealing his brain.

According to Frog Man, Praying Mantis is one of the stronger members of the House of Evolution. But unfortunately, we can never learn about his abilities as the titular hero defeat him via a single punch. But given to his praying mantis physiology, he presumably have all of the said insect's powers that brought up to superhuman level.

Retrieved from "https://villains.fandom.com/wiki/Praying_Mantis?oldid=4287846"
Community content is available under CC-BY-SA unless otherwise noted.