Preacher is a major antagonist in the 2017 film War of the Planet of the Apes. He is Colonel McCullough's right-hand man and second-in-command of the Human Military Arm Alpha-Omega. He was also the one responsible for the death of Caesar (the king of the apes).

He is portrayed by Gabriel Chavarria.

Preacher is first seen at the beginning of the film attacking the ape colony with the Human Military, he is shown respecting the Apes, considering he knows that they outnumber the humans.

The Apes notice him and take him to the colony where they talk and intimidate him and another human, while Preacher is showing at least some respect, the other Human is showing anger and rebellion against the Apes.

Even though this, the Apes are after all seekers of peace, so they ignore them and take them back to where they belong.

Preacher isn't seen that much after this in the movie until the end of the movie, where he manages to kill Caesar.

It is unknown if Preacher was insecure about his acts, considering in almost every scene he is in he looks scared/forced whenever he does something.

Finally when Caesar try destroy the Wall using grenades he was hurt by an arrow from Preacher, who later appears ready to kill Caesar. In that moment, Red kills Preacher using a grenade launcher. 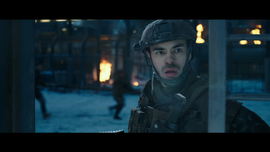