The Masters (by Newton Geiszler)

Use the Kaiju to destroy humanity so they could colonize the Earth (ongoing).

Imperialistic Evil Creators
The Precursors are the overall main antagonists of the entire Pacific Rim series.

They are an ancient alien race and creators of the Kaiju that are attempting to wipe out mankind on their behalf. The Precursors seek to conquer Earth, as they have done with countless other planets and civilizations, using their beasts of war, the Kaiju, to eradicate all life on a planet before taking it over.

The Precursors tried to colonize Earth during the era of the dinosaurs, but the environment proved uninhabitable for them, so they began destroying other planets by creating evil creatures known as the Kaiju. Millions of years later, humanity's pollution of the Earth made conditions ideal for them to consume the planet. They then sent Kaiju, such as Trespasser and Knifehead.

August 10, 2013, the Precursors created the breach to send the Kaiju to destroy humanity. The Precursors' plan to colonize the Earth was to send Kaiju in waves. The first was the shortest period that lasted from the first Kaiju appearance in 2013 to 2014.

The second phase is long-term, a eight year period that was essentially a standoff between the Precursors and Kaiju against mankind. The third and last phase began in 2024 and would end with an extinction event of the human race.

The Precursors' extinction event began with the Double Event, an occurrence that brings many more Kaiju, such as Mutavore, Otachi, and Leatherback, from the Anteverse through the Breach to Earth. K-Science officer Hermann Gottlieb predicted that the throat of the Breach is continually expanding to accommodate the Kaiju the larger they became.

When Newton Geiszler Drifts with the Kaiju's brain inside the K-Science Lab, he caught a glimpse of the Precursors's true intentions and their relationship as the creators and controller of the Kaiju. In doing so, he unintentionally revealed information to the Precursors that left the Defense Corps' Jaegers, Cherno Alpha and Crimson Typhoon, vulnerable to the specific strengths of Otachi and Leatherback when the Kaiju attack the Port of Hong Kong. In response, Precursors decided to use Otachi to kidnaps him. They nearly succeed however, as both Leatherback and Otachi immediately killed by Gipsy Danger.

The return of Gipsy Danger apparently infuriated them that they hasten their creation of Slattern. Beforehand, they send Raiju and Scunner to guard the breach from the approaching Jaegers: Gipsy Danger and Striker Eureka.

When Raleigh Becket abandons Gipsy Danger to destroy the breach, three Precursors within the creation facility glimpse the Jaeger as it descended into their universe, the Anteverse. They and the Kaiju were killed when Gipsy Danger self-destructed; the resulting explosion destroyed the Kaiju Creation Facility, and collapsed the Breach. However, this explosion only took place at the Kaiju Creation Facility, and there are more Precursors that are still out there, waiting to destroy mankind.

Following the loss of their Kaiju Creation Facility, Precursors further developed their Kaiju into deadlier beasts of war over the course of 10 years. During those years, they once again detected Newton Geiszler had been repeatedly drifting with their fallen Kaiju's disembodied brains, and was now driven insane by it, referring to Kaiju as Gods. Using the man's deteriorated mental health to their advantage, they asked him to integrate unmanned Kaiju-Jaeger hybrids with Kaiju brains.

The first Kaiju-Jaeger Hybrid that fell under their control is Obsidian Fury. After having the Jaeger dispose of Mako Mori, they sent Obsidian Fury to wreak havoc until it meets its death at the hands of Gipsy Avenger. Soon after, they have the rest of the Kaiju-Jaeger Hybrids wreak havoc on Shatterdome both to weaken and distract humanity as some of the drones reopen the breach. By the time PPDC regains control, the breach has opened long enough for 3 members of improved Kaiju army to successfully enter the Earth (the rest of the army ended up torn apart by either unstable rift they assigned to go through or accidentally dismembered by Kaiju-Jaeger drones' beams as they deactivate). However, they are killed off by the Jaegers, and Newton Geiszler is arrested while ranting that the Precursors will attack Earth over and over again.

Though Precursors failed in colonizing Earth, it becomes apparent that with both sides having improved their weapons, the war has just begun.

In spite of only being seen briefly, the Precursors appeared to be ambitious, ruthless, and power hungry in expanding their rule over other universes, similar to stereotypical alien invaders in fiction. They seemed to despise existence of other sentient beings, considering them as pests worthy for extermination.

Even so, the Precursors have been provoked twice: The first time is when Newton Geiszler used drift technology to connect his mind into one of their destroyed Kaiju's brains, resulting in their evil agenda being leaked to mankind in spite of knowing how to deal with the last known 3 active Jaegers. Then, when their champion Kaijus, Otachi and Leatherback, were ultimately destroyed by Raleigh and Mako's restored Gipsy Danger, they saw it as the last straw, which led them to create their ultimate and most horrifying Kaiju, called Slattern, to finish what they started, which led to their downfall, as Slattern's corpse was later used by Raleigh and Mako to send their self-destructing Gipsy Danger to their facility at their homeworld, destroying many of them and crippling most, if not all, of their resources to create any more Kaiju. 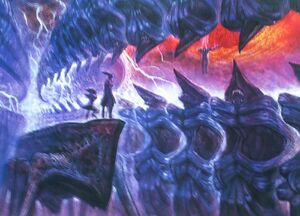