Member of the Decepticons (formerly)

Revive, and ensure the survival of his species (temporarily partially succeeded).

Hunt down and destroy the Autobots (partially succeeded; formerly).
Have his revenge on Megatron (failed).
Defeat Unicron and save Cybertron (succeeded).

In Predacons Rising, Predaking becomes a supporting protagonist when he reunites with the other Predacons and demands that they help the Autobots defeat Unicron after his fallen brothers and sisters were brought back from the dead.

He was voiced by Peter Mensah, who also voiced Qovas in Agents of S.H.I.E.L.D.

The Predaking that we know today was actually a cloned version of the original Predacon with the same name, appearance, and status as Predacon Leader. However, both cloned version and original are different - whereas cloned Predaking possesses a certain degree of compassion toward his fellow Predacons and is willing to protect them like the actual king (confirmed when he was deeply enraged and anguish over his fellow Predacon's clones and happy when he met Skylynx and Darksteel). the original Predaking was very ruthless, brutal, and had no qualms about allowing his minions to devour other Cybertronians and even sometimes killed them himself.

At the dawn of Cybertron's beginning (after Primus and Unicron's confrontation), the original Predaking walked among the other Predacons. He was, however, savage with little care for all that were not Predacons. His kind preyed on the smaller, weaker Cybertronians for amusement. This brought him into conflict with Prima and eventually they fought with Prima winning and Predaking swearing to never interfere with Prima's kind and Prima promising the same. Prima was, unfortunately very true to his word and left Predaking and his followers to die in the Great Cataclysm. Predaking ordered his kind to flee but soon realized they could not escape by flying and attempted to reach the underground for shelter. If Predaking did not die then, the resultant fallout slowly killed him. Later during the Autobot/Decepticon war for Cybertron the original Predacon was cloned along with other Predacons by Shockwave and sent to Earth to wipe out Autobot forces and guard the Energon reserves. During this time the humans discovered their existence and became one of many inspirations for human mythologies in their case the myth of dragons. However the time waiting for Megatron to arrive the Predacons passed away from the passage of time or more likely a lack of Energon and their bones (micro-chipped) were left burried under rocks. All of these events are later learnt by the cloned Predaking, in which he later took the said Predacon's name for himself after further development of his intelligence.

Re-creation via Cloning and Events in the series

Having recovered Predacon CNA, Shockwave successfully cloned one of the great beasts, storing it in his lab. He brought the creature online and took it to Earth to hunt Autobots. After Shockwave gave it a whiff of Wheeljack's energon, it was dispatched and soon found its quarry near an energon mine. Wheeljack and Bulkhead fought the creature, first trying to blow it up with a grenade, then luring it into an explosive-laden mine in an attempt to destroy it. The beast emerged triumphant, only for Ultra Magnus to arrive in his ship and fire at it. It continued to dog the starship, clinging to the top of it until Magnus managed to knock it off by flying through a canyon. The Predacon returned to Megatron's citadel, where Starscream reflected it was a pity it couldn't tell them why it failed. The Predacon responded by growling, rather quietly and angrily. When Darkmount came under attack, the Predacon was unleashed to attack the Autobots. It began chasing Ultra Magnus's ship, but was tricked into flying through a GroundBridge to the Arctic, where it swiftly froze.

Some time later, the temperature in the Arctic rose to a sufficient level to allow the Predacon to free itself. It swiftly tracked down the Nemesis, and Megatron decided to assign it to Starscream while Shockwave continued work on cloning more Predacons. After several hilarious attempts to make the beast compliant, Starscream was ordered to deploy it against the Autobots currently attacking one of the dig sites. The Predacon attacked Ultra Magnus, Bulkhead, and Wheeljack, eventually causing a cave-in after swatting away Wheeljack's grenade. The cave-in unearthed a Predacon optic, the sight of which awakened a memory in the beast. It brought the eye to Starscream, then engaged Miko Nakadai, who had acquired the Apex Armor. Overhearing Megatron's demand that the bone fragment be brought to him, the Predacon complied and left the rest to Starscream.

Back at the Nemesis, the Predacon responded to Starscream's continued orders with a swipe of his tail that missed the Decepticon but demolished the ship's communications array. Starscream frantically tried to fix it, eventually attempting to reboot the network by entering an override access code into a computer console. The Predacon watched him and later, when alone, it entered Starscream's access code into the computer and began to call up information on the origins and existence of Predacons.

During a tour of Shockwave's off-site laboratory, the Predacon revealed his intelligence and ability to transform to his fellow Cybertronians. He offered to lead the Predacons on Megatron's behalf as "Predaking", but Megatron was wary of giving control of an army more powerful than his own to someone else. On Starscream's advice, he arranged for the termination of the clones using the Autobots discovering the lab as a pretense. Predaking fell for the ruse, engaging Ultra Magnus and Wheeljack after they destroyed the clones. He disabled both and destroyed the Forge of Solus Prime, but was stopped from delivering the final blow by Optimus Prime.

Predaking continued to believe that once Cybertron was restored, Megatron would resurrect the rest of the Predacon race. As the Decepticons worked to repair the Omega Lock, Predaking was dispatched to Antarctica to battle the Autobots. He battled with Optimus Prime at length, and though he was almost buried under a glacier at one point, he eventually got the better of the Autobot leader and sent Prime crashing into the ground. He was prevented from finishing Optimus off when Megatron instructed him to make sure the target of the Decepticon mission was kept safe, and he had to retrieve Shockwave and a generator from the Solaris particle collider building. Back on the Nemesis, he found that the Decepticons had captured Ratchet, whom Megatron promised would be his to terminate once the Autobot's usefulness had ended.

True to Megatron's word, Predaking was presented with Ratchet as a plaything; however, once the Autobot revealed that Megatron had arranged for the Autobots to find Shockwave's lab, Predaking went on a rampage through the ship. After demolishing every Vehicon in his path, the Predacon attacked Megatron and almost got the better of his former leader. A missile to the back from Starscream rattled him enough that Megatron was able to blast him out of an airlock. Predaking somehow clung to the hull and went unnoticed by anyone, until the warship returned to Cybertron and restored the planet. Witnessing the world's resurrection, Predaking transformed and flew off.

He found a Predacon burial ground, uncovered by the movement during the planet's rebirth. It was there that the Autobots found him, and attempted to persuade him to help them find two new Predacons they'd encountered. Though Predaking refused as he couldn't forgive them for their role in the destruction of his kind, he went searching himself and soon found evidence that the Autobots had been telling the truth. His signal intended to attract the two Predacons instead brought Unicron, now in possession of Megatron's form, to his position. Unicron defeated him, taking the location of the burial ground from his mind, and by the time Predaking returned, he found to his horror that Unicron had desecrated the site. Asserting his dominance over Darksteel and Skylynx, he led them in an attempt to assist the Autobots in fighting Unicron's horde of undead Predacons. They were successful in slowing the horde down long enough for Optimus Prime to defeat Unicron, causing the Terrorcons to disintegrate. The trio later tracked down Starscream, intending to exact some revenge. 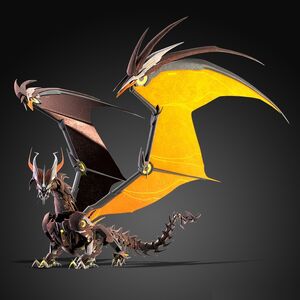 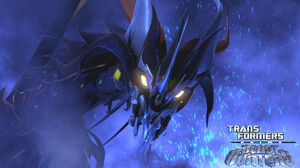 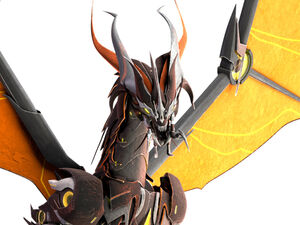 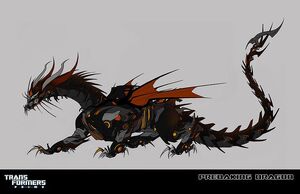