Betray Korso (all succeeded).
Destroy the Titan for money and survive the Drej (failed).

He is Joseph Korso's first mate aboard the spaceship Valkyrie, and is seen as a narcissistic yet suave personality. He, along with Korso, later reveal themselves to be working for the Drej and their monarch.

He was voiced by Nathan Lane, who later voiced Hamegg in the 2009 adaptation of Astro Boy.

Preed is an Akrennian with features of a fruit bat. He appears to have some kind of thin wing membrane across his armpits, and a thick, prominent neck contrasting of his abnormally long, thin limbs and fingers. His left ear is half-missing, shot off in a gunfight with slavers. The damage was patched up with a metal plate, now embedded in his skull.

Preed is basically described as rather cocky, sly, stingy, and shrewd. He is also shown to be rather bold whenever it comes to his lustful and provocative attraction to Akima thus shows a hint of envy when he sees her and Cale embracing one another.

When he's revealed to be a Drej agent, Preed shows a cold lack of hesitation in trying to slaughter Cale and Akima, leaving Stith and Gune with a bomb which nearly slaughters Gune and is actually a rather nasty and brutal fighter. Unlike Korso, who was desperate in his terms with Drej, Preed has no sympathetic reasons for his actions and even turns traitor towards the captain just to save his own hide.

The version from the novel is even worse. Not only does he lack more of his comedic traits, but he is also far more sadistic. For example, unlike in the movie where he mostly double-crossed the crew to save himself, the novel version turned against them so he can enjoy watching the Drej wipe out all life.

Preed is first seen with Akima nursing an injured Cale Tucker. When Preed makes a sexist comment about Akima, she is just disgusted. Later in order to find the Titan, Cale, Korso, and Akima speak to the Goul while Preed tries to shoot a bug with a ray gun, and Gune fiddles with his device. They both panic and rush to the crew when they notice the Drej coming.

Later, when Korso was exposed to making deals with the Drej, Preed's own true cunning and treacherous nature is exposed. Cale and Akima escape from the Valkyrie, but she is wounded by Preed. They are stranded on the colony as Korso and the rest continue to the location of Titan. With the help of the other humans, Cale and Akima repair and refit the Phoenix, one of the colony's derelict spaceships, and race off to find the Titan before Korso and Preed do.

Amid the Andali Nebula's giant ice crystals, Cale and Akima find the Titan. While exploring the massive ship, they discover a holographic message left by Cale's dead father, revealing the true nature of Project Titan: The ship is able to create a completely new, Earth-like planet, and has stores of all the DNA of the animal and plant life that once lived there. This was the reason the Drej feared humanity's potential enough to destroy Earth. Cale's father also explains that, after escaping the destruction of Earth, the Titan ran out of power and is unable to execute the recreation program.

The Valkyrie arrives, and Korso and Preed board the Titan, leaving Stith and Gune (both of whom are unaware of their captain and first mate's true intents) behind. Before Preed leaves, he hands Stith a communicator wristwatch and follows Korso out the door. When Stith gets a call from Preed, the watch starts beeping rapidly, revealing to actually be a bomb. Gune snatches the bomb off Stith's wrist and attempts to get rid of it, but it detonates and Gune seemingly perishes in the explosion (it is later revealed he survived).

Korso and Preed corner Cale and Akima and interrupt his father's message. However, Preed turns on Korso and holds him, Cale and Akima at gunpoint, stating that if he kills the three before the Drej arrive, the Drej will spare his own life (and he'll get paid for helping the Drej find the Titan). Akima states to Preed that the Drej are highly unlikely to hold up their end of the bargain, but Preed has already gone into too much of a murderous frenzy to listen. Cale and Akima try to attack Preed, but he knocks them both aside. All of a sudden, Korso sneaks up from behind Preed and snaps his neck, killing him. Korso throws his body down the stairs and into the floor. 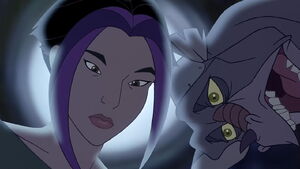 "Is it dead? Can we eat it?" - Preed's first appearance with Akima. 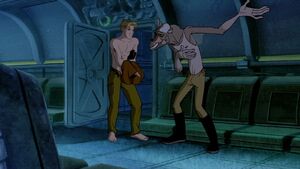 "I believe that he's in Navigation. We're headed there now." 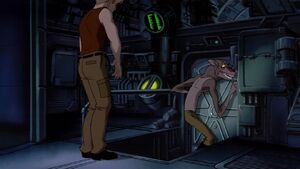 Preed knocking on the door to Gune's room.

"Are you going somewhere?" - Preed's betrayal. 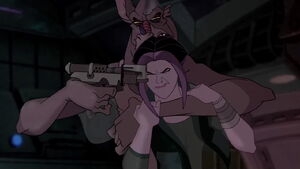 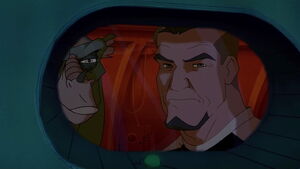 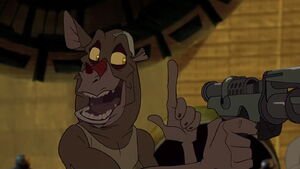 Preed exclaiming to Akima so he doesn't draw his gun. 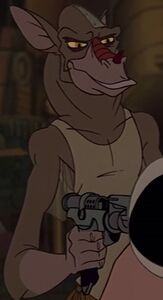 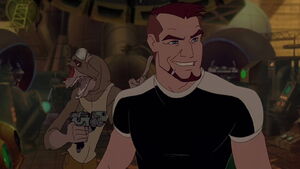 "Actually, you all have." 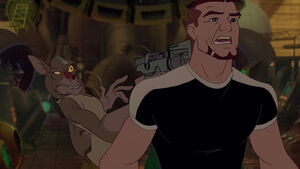 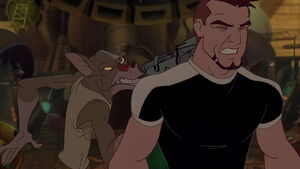 "If you'll relieve yourself of your firearm." 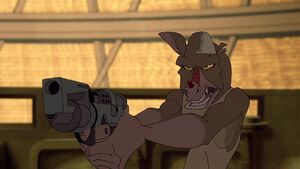 "They'd let me live, provided I kill all of you before they get here." 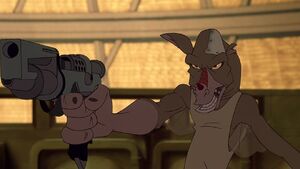 "They should be here shortly." 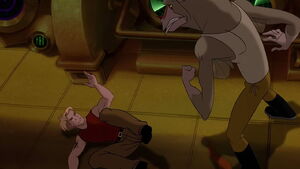 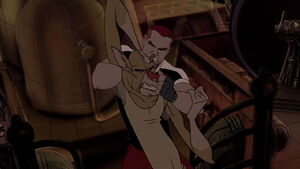 Korso restraining Preed by the neck. 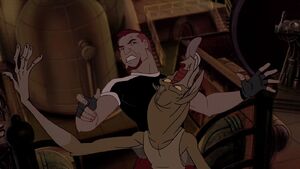