Sergei Krylov was a scientific genius who became the most influential behind-the-scenes scientist in Soviet Union. Krylov sought physical power to match his intellectual and political might by mutating himself into a superhuman radioactive being.

He forced Dr. Tania Belinskya, the scientist and hero known as the second Red Guardian, to return to the Soviet Union to help perform the experiment. Krylov had also selected Belinskya as the woman he believed most worthy to be his mate once he had achieved his goal of transforming himself into a superhuman being. Krylov placed Belinskya's mind under his mental domination. Through exposure to cobalt radiation and a nuclear explosion, Krylov transformed both himself and Belinskya into super humans capable of generating nuclear energy and using it in various ways. Calling himself the Presence, he and the entranced Red Guardian battled her erstwhile team mates, the Defenders. 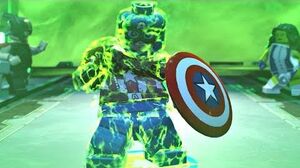 Retrieved from "https://villains.fandom.com/wiki/Presence?oldid=4100527"
Community content is available under CC-BY-SA unless otherwise noted.