Leader of the Rebellion
President of Panem (briefly)

Presiding over the Rebellion.

Kill Katniss Everdeen to make sure she doesn't become a threat to her reign.
Orchestrate a symbolic Hunger Games and make the Capitol children fight in that competition (both failed).

She is the President of District 13 and the leader of the rebellion against the Capitol. It turns out that she is a corrupt and ruthless who is in some ways worse than the people she fights, including President Coriolanus Snow.

She was portrayed by Julianne Moore, who also played Mother Malkin in The Seventh Son, Margaret White in the 2013 remake of Carrie and Poppy Adams in Kingsman: The Golden Circle.

During the 75th Hunger Games, President Coin starts the second rebellion against the Capitol to take control over Panem. As she needs Katniss Everdeen for her unique position as a symbol of rebellion to the districts, she rescues her, Finnick Odair and Beetee from the arena and hide them in District 13. This caused the Capitol to bomb District 12, Katniss's home, but Coin showed little emotion to this.

However, Coin soon discovers it is hard to cooperate with Katniss, who dislikes her for her selfishness and ruthlessness. Coin often regrets openly she couldn't have saved the more charismatic Peeta from the arena instead of Katniss.

Before the attack on the Capitol, Coin realizes Katniss could menace her position of President, as people still love Katniss more than her. To destroy her rival's psyche completely, she decides to murder someone Katniss really loves. In the Capitol, Coin uses a Capitol hovercraft to launch bombs (placed in supply packages) on some children. When they blow up, Rebel medics, alongside with Katniss' sister Prim, run there to help injured kids. However, once they reach them, the other bombs blow up, killing all the children and medics, including Prim. After that, the Capitol gives up to the rebels.

Katniss, who saw her sister die, is now heavily dazed. Meanwhile, Coin becomes the new President of Panem and decides to organize the last Hunger Games in which children of the Capitol would fight to death. Horrified, Katniss plots to foil her plan and Snow, who is being sentenced to death for his crime, tells her that the bombs that killed her sister was sent by Coin and not him. She initially disbelieves him but after remembering the promise that they made to not lie to each other, Katniss realizes Coin's true goal: she planned the rebellion in the districts by having them fight it out, leaving District 13 untouched; once the districts were hers, the Capitol could easily be nabbed for her to control, making her and Snow the two sides of the same coin. To avenge her sister's death, Katniss assassinates Coin after her speech during Snow's execution by shooting her in the heart with an arrow. Snow then insanely laughs at this (a sign of tuberculosis) as a massive mob of shocked and enraged citizens surge towards him and trample him, and he is killed either by tuberculosis or the stampede made by the angry mob.

Alma Coin is a born pragmatist and an egotistical leader. She is rather cold and emotionless, perhaps due to the loss of her family, but does appear to have a relatively kind side in the movies. It is unknown just how much she cares for Katniss, but she still goes out of her way to console her when she's sad about Peeta's predicament. However, Coin is shown to be quite frustrated whenever people don't listen to her, as she doesn't like what she cannot control. She takes this to an extreme when she decides Katniss is more useful to her when she was dead. Thus, while capable of kindness, Coin likely only shows compassion when it suits her goals.

While Coin superficially seems to be a "better" leader than Snow, she still turns out to be a complete sociopath who is only less vile in comparison. She is very relaxed by nature, and never once loses her temper with anyone even when they question her. Coin is callous and analytically ruthless to a fault: she does not emotionally react to loss or defeat, and has absolutely no complaints about sending people to their deaths, or worse. Coin also possesses a logical, calculating and subtle intellect, and is a virtually flawless strategist when it comes to propaganda, warfare, politics and democracy. Her confidence, magnetic vocabulary and apparent empathy make her a brilliant public speaker and a master manipulator - her methods are far more subtle than that of President Snow. Furthermore, because of her more laid-back approach, this makes her less impulsive despite her callous nature eventually resulting in her defeat.

As she gets closer to overthrowing Snow, the power gets to her head, and she becomes much more cold-blooded and less passionate about freeing Panem. Coin becomes extremely arrogant and overconfident to an extreme, conceitedly believing that things will go perfectly according to her preconceptions and predictions. In the end, she goes as far as to bomb children and hold a new Hunger Games just to secure her victory. It is still possible that she genuinely wants to make Panem a better place, but her methods become inhumane.

In the end, her own delusional idea of Panem is her undoing, since she ignorantly trusts that Katniss is okay with her being the new president of Panem. When Coin holds her final triumphant speech, there's no more sentiment left in her voice - only blind pride. She goes from being a visionary official to becoming a corrupt ruler with the same intentions as President Snow - genocide, power and absolute control, only far more unquestioning and a lot depraving. That said, she isn't completely evil because it's possible that she still had good intentions. 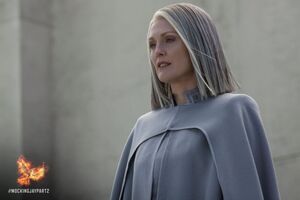 Coin as the new President of Panem 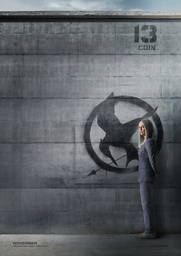 Coin in a promotional image 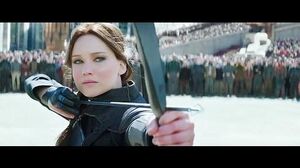 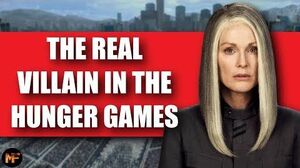