President and CEO of the Haltmann Works Company

Tyrannical officer (after he was corrupted)

Piloting his own personal mech

Use Star Dream to revive his daughter and learn the secrets of the universe (formerly).

Use the power of Star Dream to conquer the universe.

President Max Profitt Haltmann, or better known as President Haltmann, is the tyrannical head of the Haltmann Works Company, and the main antagonist of the 2016 Nintendo 3DS video game Kirby: Planet Robobot. He is the father of Susanna "Susie" Haltmann.

He was voiced by Mugihito, who is best known for voicing Sigma in the Mega Man X series and Master Zik in Sonic Lost World.

Many years before the events of Kirby: Planet Robobot, Haltmann was an inventor from a distant planet who studied the most advanced technology of the universe, and stumbled upon an ancient supercomputer known as Star Dream, a machine powerful enough to grant wishes. Despite his knowledge of the risky consequences that may ensue, his lust for more knowledge drove him to rebuild Star Dream to learn more about the universe's secrets. Unfortunately, tragedy struck when an accident occurred during a test run of the Mother Computer and Haltmann's daughter, Susanna P. Haltmann, vanished, leaving Haltmann to believe she perished. Devastated from the loss of his child, Haltmann decided to rebuild Star Dream to make his wish to see his daughter again come true. Haltmann's obsession with reactivating Star Dream led him to use its control helmet repetitively, sapping away his memories of Susanna. Even when the Mother Computer managed to recover Susanna, by then Haltmann lost all memories of his daughter, but appointed her as his secretary out of what fondness remained of him about her.

Due to its flawed controller, Haltmann grew to trust Star Dream, and began his master plan to bring eternal prosperity to his company and began harvesting the natural resources of other planets to fuel Star Dream, including Popstar, turning them into mechanical wastelands, and brainwashed their inhabitants to serve Haltmann's name as mechanical slaves. Once he had completed the reactivation of the wish-granting machine, he was satisfied, but in the middle of all his glory, Haltmann was confronted by Kirby in the head office of the Access Ark, the mothership of the HWC. After she was defeated by Kirby with Mecha Knight +, Susie tried to pull off something that was extreme, but Haltmann dismissed her from her position for her failure so that he could fight Kirby instead.

What Haltmann did not know, though, was that Star Dream had been studying the cosmos through the Haltmann Works Company and had secretly grown a mind of its own and a distaste for every organic life form. When Haltmann, after being defeated by Kirby, decides to use the power of Star Dream to obliterate Kirby, Susie snatches the control device out of his hands just as he plants it on his head, planning to sell Star Dream for profit, but she is suddenly blasted away by the machine before she puts on the helmet. Star Dream takes possession of Haltmann's soul and body, using it to declare all organic life-forms as obstacles in the way of Haltmann's wish for eternal prosperity of his company and must be destroyed. The machine then bursts from its pedestal and out into the cosmos to eradicate all life in the universe. Kirby is later able to pursue Star Dream using a combination of his Robobot Armor and Meta Knight's airship, the Halberd, defeating it in a dogfight throughout outer space. Even when it combines with the Access Ark, Kirby and his Robobot are able to seemingly destroy Star Dream by drilling through the two machines.

Although Haltmann's body was destroyed in the explosion, his soul remains within Star Dream's hardware. Some time after Star Dream's programming was short-circuited by Galacta Knight into creating Star Dream Soul OS, the machine no longer required Haltmann's thoughts to continue functioning and began erasing whatever remained of his soul from the system; before Haltmann's mind is erased from the computer's programming, by pausing the screen during the second, third, and first half of the fourth phase of the battle during the "True Arena", the pause description is Haltmann's ultimate regrets for rebuilding Star Dream, saying that all he really wished to accomplish was to see his daughter one last time, and laments how foolish he was to believe a machine could make his dream come true. By the time Kirby reaches the heart of Star Dream, Haltmann's soul was successfully erased from Star Dream's hardware, reducing it to a cold, mindless machine, devoid of its original purpose and bent only on creating mindless destruction. However, as Kirby fights against Star Dream's heart, Haltmann's screams can be heard as each of the thirteen pillars protecting the heart are destroyed, indicating that there was still a remnant of his soul that was not yet deleted from the malicious computer. When the heart finally shatters into pieces, Haltmann is heard screaming in a slow pitch before echoing away; his soul finally released and granted peace.

Haltmann is fought inside his office, located at the heart of the Access Ark.

The boss battle against Haltmann occurs immediately after Kirby defeats Mecha Knight+ in Stage 6 of Access Ark. If he is beaten by the mad CEO, Kirby will automatically skip the battle with Mecha Knight+ upon reentering the boss door.

Haltmann fights using his golden mecha, the Executive Suit. He starts the battle by firing four Susie-shaped drones that home in on Kirby's location. However, Kirby can inhale these drones with his vacuum breath and use them as ammunition. Haltmann then attaches his Executive Suit to the central platform and spins repeatedly around it before summoning more drones.

Upon losing a fifth of his health, Haltmann lowers the central column in the battlefield, changing the arena into a straightforward one. He then rises into the air, into a spot where he is invulnerable to Kirby's attacks, and summons a large robot minion to deal with Kirby. These robots are called Yesmans, and their only attack is to perform a punch. Kirby cannot inhale these robots. After the robot is destroyed, or not destroyed in a certain amount of time, Haltmann comes down, charges up, and performs a spin dash across around the circumference of the stage several times, then plows straight through the middle. He does this several times, occasionally leaving stars behind for Kirby to inhale and spit back at him. Then he jumps into the air and fires a laser from the ruby attached to the bottom of his Executive Suit onto the ground, leaving a stain of fire wherever it hits. This attack repeats several times before Haltmann charges another spin attack.

When Haltmann is down to half health, he smashes a hole through the middle of the arena, making it circular again. He then fires a multitude of drones, which bombard the arena one by one in a counter-clockwise wave. Haltmann will often shoot out bills into the air, some partially obscuring the screen (blinding the player somewhat), then follows up by doing a spin dash around the arena, occasionally jumping across the hole and leaving stars on impact where he lands. Afterwards, Haltmann performs a series of bounces across the arena, leaving stars wherever he lands.

When Haltmann is down to the last fifth of his health, he conjures a large hollow cube to appear in the middle of the arena. He summons two robots into the arena and jumps into the cube, causing it to fire two large beams from the two holes the robots stand before, then two more from the other two, and then all four. Haltmann then fires his Executive Suit like a drill through the cube to the opposite side of where he first drilled through, creating a shockwave where he lands. After that, he fires a multitude of drones, which bombard the arena in a counter-clockwise wave.

In the "Meta Knightmare Returns" and the "True Arena" subgames, Kirby or Meta Knight fights against Pres. Haltmann 2.0, who fights in the same style as his regular form, except he moves faster, has more health, fires six Susie drones at the beginning instead of four, and targets the hollow cube at Kirby or Meta Knight before drilling through it.

Once he is downed, Haltmann attempts to pilot the mech further. However, it blows up in his face, but he manages to survive as money rains down.

Haltmann has the appearance of a pale egg with disembodied hands and feet. He has solid cyan eyes, and lavender hair and a mustache. He wears a pink suit with a dark blue coat and a maroon tie. His hands are covered with bright purple gloves with gold-encrusted rubies and his feet are covered by black shoes. He also wears a golden radio piece covering his right ear, which he uses to control his golden mech, the Executive Suit, turning into shades whenever he activates it. When he gets possessed by Star Dream, his eyes turn from cyan to bright yellow.

Before losing his mind from his obsession with Star Dream, Haltmann was a kind, gentle, and sympathetic businessman who put all of the love and care in his company with his daughter by his side. However, after the accident that caused the separation between him and Susanna, Haltmann became a complete corrupt official, believing that everyone who did not believe in Star Dream's power to grant wishes as an obstacle in his way and deserved to be "punished" through brainwashing, cloning, or mechanization, as in the case of Whispy Woods, Meta Knight, and King Dedede. His maniacal personality is shown in his boss battle when Haltmann summons two robots to aid him in his battle against Kirby, only to destroy them himself with the power from his Executive Suit whilst he insanely laughs.

However, even with his cold and emotionless individuality against others in the universe, Haltmann contains compassion in protecting his company, such as sealing Star Dream's function to summon Galacta Knight, fearing that it may not only destroy the Access Ark, but also a planet or two. It is only after Star Dream possess him when he realized that the machine he spent the majority of his life creating was eviler than he ever was, to the point where Haltmann begs Kirby to destroy his creation to save the world, even though doing so will kill him in the process. 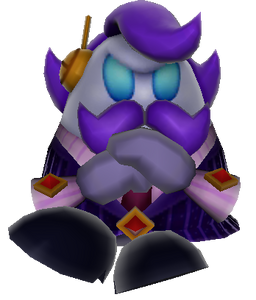 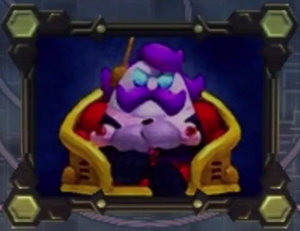 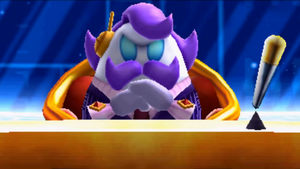 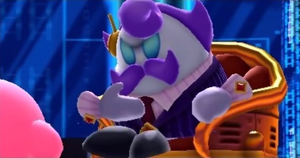 Haltmann introducing himself to Kirby. 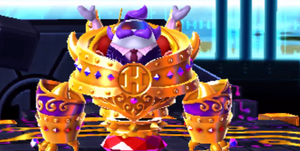 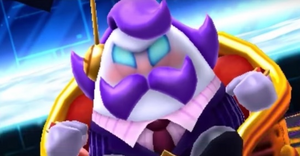 Haltmann enraged after his defeat from Kirby. 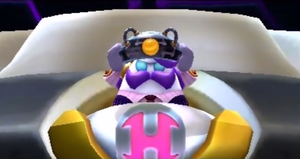 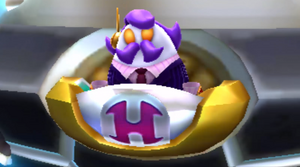 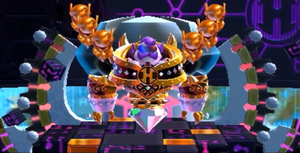 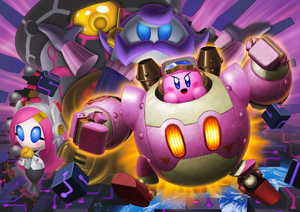 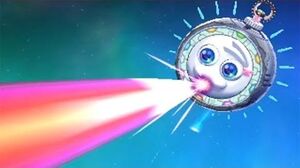 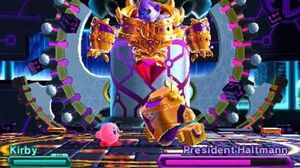 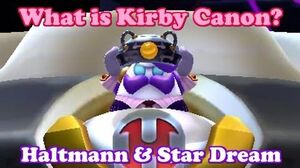