Imprisoning plumbers and those who are disloyal to him.

Retrieve the meteorite that will allow him to travel between dimensions.

Get rid of the Mario Bros for ruining his plans
Rule our dimension to wipe out all mammals (all failed).

President Bowser Koopa is the main antagonist of the 1993 live-action film Super Mario Bros., which is loosely based on the Super Mario Bros. video game series. He is the film's loose adaptation of Bowser.

He is a thoroughly corrupt and self-proclaimed "President" of Dinohattan who plots a large scale assault and takeover of Earth. Unlike his video game counterpart, Koopa, like the other inhabitants of Dinohattan, is a humanoid with dinosaur ancestry.

He was portrayed by the late Dennis Hopper, who also played Peter Vollmer in The Twilight Zone, Tom Ripley in The American Friend, Frank Booth in Blue Velvet, Howard Payne in Speed, the Deacon in Waterworld and Victor Drazen in 24.

Koopa's personality is similar to Bowser in the games at the time. However, he is shown to have a straightforward and comprehensible motive in regard to mutually merging both dimensions, citing that he intends to use Daisy to merge them for the future of his species, especially since his species has to go through several hardships that stem from the synchronous world being a nearly complete wasteland.

Despite this, Koopa still sees himself as a villainous, calculating and manipulative person; while pretending to be a lawyer for Mario and Luigi, he tells them that he is "one evil, egg-sucking son of a snake", and doesn't deny this after his true identity is revealed. He even passed out a law that arrests people for singing songs that insult him, and another law that arrests people for being plumbers.

Koopa is also shown to be a germophobic person. In his first appearance when he rants about how he rules the world overwhelmed with fungus and slime, he dunks his hands in boiling mud in an attempt to sterilize them. When he first meets the Mario brothers, he shakes their hands, but wipes his hand off with tissues afterwards; after assaulting Luigi soon afterwards, a police officer sprays his hands with disinfectant, and even later has a laboratory technician de-evolved into primordial slime simply for sneezing in his presence. He also has relaxation in a mud Jacuzzi right before ordering Lena to bring Princess Daisy before him.

Koopa is a middle-aged man with sea green eyes and blonde hair with streaks of gray shaped into a crown who dresses in a black business uniform. Although he is human in appearance, he is actually a highly evolved Tyrannosaurus rex.

After he was de-evolved by the Mario brothers, he gained eyes with slit pupils, spikes on his head, a reptilian tongue and his face morphing into being more reptilian. Near the end of the film, he's de-evolved into a semi-humanoid tyrannosaur before morphing into his true dinosaur form that resembles a gigantic Tyrannosaurus rex.

When Daisy's mother goes under the sewers of Brooklyn, Koopa appears behind her and interrogates her "where's the rock". She knocks a large piece of wood on him, then rocks fall on her, killing her whilst Koopa survives.

In Dinohattan, a parallel universe whose inhabitants evolved from dinosaurs, Koopa talks about how the place gets worse every day and how our dimension is better compared to Dinohattan. He talks about how 65 million years a meteorite struck to Earth. Spike and Iggy, both Koopa's henchmen and cousins inform Koopa that they've captured Daisy.

Koopa then questions them "where's the rock". When he finds out that they don't have the meteorite piece he tells them that without that meteorite piece he won't be able to merge between dimensions. He questions them where it is. They tell Koopa that Mario and Luigi took it. He says "Plumber alert" to the police. After the Mario brothers are reported a voice says that there are plumbers and that there will be 2,000 coins if someone finds the Mario brothers.

Mario and Luigi are eventually captured and imprisoned, and they eventually seen by Koopa who is disguised as a lawyer named Larry Lazard. When he asks the plumbers about the meteorite piece, he doesn't get the answer he wants so he orders his men to take them to the evolution chamber to be de-evolved.

The two plumbers watch as Koopa de-evolves a citizen named Toad into a goomba as a punishment for singing songs protesting his reign. However, Mario and Luigi end up shoving him into the evolution chair and set the dial to de-evolve him too. Fortunately, his men stop the process, but the damage is done as some of Koopa's previous Tyrannosaurus features have returned. Furious, he swears the plumbers will die.

Later Koopa is mad with Iggy, so he has him apparently de-evolved, instead Koopa gives him higher intelligence because he always knew his minions were moronic and Spike seems happy with his seeming promotion and his companion's fate, until Koopa reveals he had the test programmed for both of them and although Spike screams in protest, he actually benefits from the upgrading, he becomes more intelligent like his cousin. Koopa orders the two to set off and kill or capture the Mario brothers. They do so.

Koopa gets into an argumentative discussion with Lena, his girlfriend, because Lena wants to take control and become the chosen one to merge the dimensions, but Koopa wants to do it himself and kill everyone else. Koopa betrays Lena and when Spike and Iggy return from their mission (having actually befriended the Mario brothers) Koopa orders their execution in his anger. However, Spike and Iggy escape by siding with Daisy. This sparks a rebellion against Koopa.

Finally, Koopa ambushes Daisy and steals the meteorite shard, planning to cause the portal. Daisy confronts Koopa about betraying her father, the King, and "killing" him but Koopa reveals the King's still alive, albeit in fungus form. Koopa imprisons Daisy and the plumbers, but delightfully orders a pizza to celebrate his success. Lena, enraged by Koopa's betrayal, electrocutes herself to death when trying to open the portal. Koopa stands to prepare the portal and announces to the city of Dinohattan that he's making history, then humorously asks where his pizza is. Then the portal is opened, and Koopa steps inside, getting transported, with his bodyguard Goombas, to the city of Manhattan. Koopa is overjoyed at "being home" and announces that he will turn everyone into monkeys. He does with the boss of the construction site, shrinking him into a monkey. Koopa then famously mocks him with "Monkey!".

However, Mario and Luigi escape their cells with Daisy and the other captives, and they pull Koopa back into the dinosaur city. An epic battle ensues in the center of Dinohattan, but when Koopa gets the upper hand, Mario sets off a Bob-omb which walks through the city. A taxi driver narrowly hits it, and tersely waits until the bomb walks by.

Mario and Luigi then arm themselves with De-evolve guns and shoot Koopa mutating him into a humanoid Tyrannosaur. Suddenly the Bob-omb that Mario activated earlier explodes underneath the platform where Koopa is standing, knocking him into an empty building tank.

There is sudden silence and Mario and Luigi go over to the place where Koopa fell. Suddenly with a monstrous roar, Koopa appears again in his true dinosaur form, scaring the plumbers and some of the other citizens. The Mario Brothers then use the guns again, this time turning Koopa into "primordial slime" - the lowest form of life which drips out of the tank and spills into the street below. With Koopa finally gone, everyone cheers. The citizens then begin destroying all his voting posters to erase his evil memory. 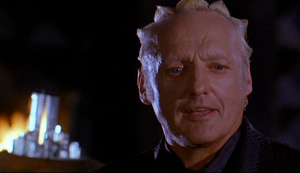 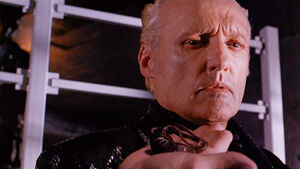 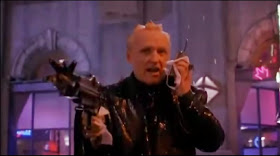 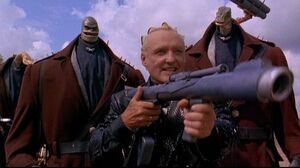 President Koopa with his goombas and de-evolution gun. 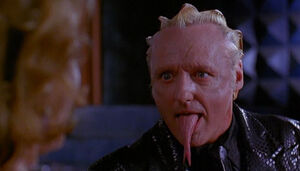 Koopa with his lizard tongue. 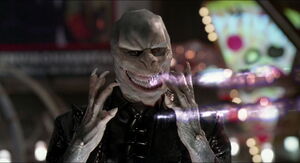 Koopa transforming into his dinosaur form. 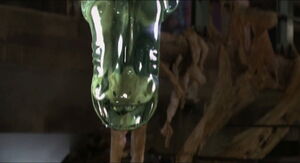 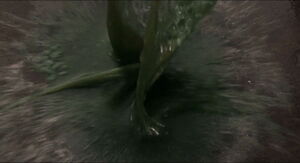 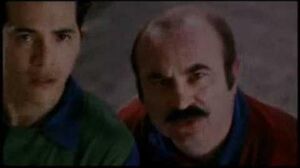 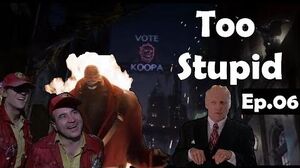