Leading his minions through the Void.

Defeat Kid Loki and his team of Loki variants.

Take over the Void (both failed).

He is a pruned variant of Loki Laufeyson who commands a team of barbaric Loki variants, and he wants to defeat his other variant, Kid Loki, to become the leader of the void. During his attempt of usurpation, President Loki was betrayed by his own brethren and shortly afterwards had one of his hands eaten by Alligator Loki - leaving his fate ambiguous.

Like his original version and Variant L1130, he is portrayed by Tom Hiddleston; the actor also played Captain James Hook in The Pirate Fairy and Lord Nooth in Early Man.

President Loki resembles his original counterpart, but wears a formal suit, comprised of a green-and-white undersuit, and a dark coat with a torn left shoulder and a badge reading "Loki For President". Like many other Loki variants, he also wears a golden horned crown on his head.

Like the original Loki and the other variants, President Loki is egotistical, narcissistic and arrogant, as he attempted to run for presidency and take over the void for his own needs. Like most of the variants, he was a manipulative, willing to betray Boastful Loki despite making a deal with him. Despite this, President Loki showed himself to lack the charm like his original version, as his own men betrayed him, much to his annoyance.

Like his original version, President Loki was a Frost Giant by birth, being the son of Laufey, but would be adopted into the Asgardian royal family and become a prince of Asgard. However, not much is known past that, since this variant diverged off of the sacred timeline formed by He Who Remains to stop his own variants. It can be assumed that, sometime prior to the series' events, this variant of Loki ran for President of the United States. It's assumed that this variant caused the nexus event by trying to run for president, which caused the TVA to go after him.

While he was apprehended by the TVA and banished to the Void, he still retained his "President" persona. Soon, he would assemble a group of pruned variants, many of them Loki's themselves, and venture throughout the Void. Before Loki Variant L1130's arrival, he would secretly make a deal with Boastful Loki where, in exchange for supplies, he would grant him his variant army and help him usurp Kid Loki.

President Loki and his army arrive at Kid Loki's hideout just as Variant L1130 is attempting to exit. Confronting him and the other Loki variants, he reveals to Boastful Loki that he is betraying him as well, plotting to take Kid Loki's throne for himself. However, this plan is hindered in on itself when his own army betrays him. This only escalates when Alligator Loki bites his right hand off, resulting in an all-out fight between the Lokis. President Loki is last seen being mauled by an illusion of Alligator Loki as the others fight. It's currently unknown if President Loki was killed in the fight or not, considering his hand injury. 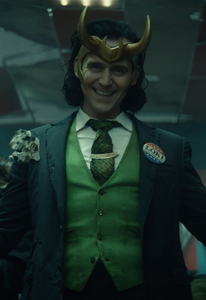