Waylon A. Skroob (according to a certificate on his wall on the TV show).

Take the air supply away from Planet Druidia in order to save Planet Spaceball (failed).

President Skroob is the main antagonist in the spoof movie Spaceballs. He is the President and supreme ruler of Planet Spaceball. He is a parody version of Emperor Palpatine from the Star Wars saga.

He was portrayed by the film's director Mel Brooks, who also played Yogurt in the same film.

When President Skroob found out Planet Spaceballs is slowly losing air, both Skroob and Dark Helmet devise a scheme that involved sucking the air out of the nearby planet, Druidia.

Although he was the supreme ruler of the planet, he's not the brightest president there is, in fact Dark Helmet said that even if they do succeed with their plan, the air wouldn't last 100 years with him in command (this may have just been an insult on Helmet's part though) The combination on his luggage was also 1-2-3-4-5 (which is the same combination to open the air shield) which Dark Helmet secretly stated that an idiot would have that number for their luggage.

On his planet, Skroob was informed of Dark Helmet's progress in capturing Princess Vespa. He went to the control room by being beamed down, where unfortunately, his head ended up backwards. After he was beamed back, his head back on the right way. Paranoid about it happening again, he decided to walk there. He then had Dark Helmet ordered to capture the princess alive.

Later, while he was having sex with two of his assistants, he was suddenly notified that Dark Helmet lost the princess on the planet Vega. He then ordered them to "comb the desert".

The next day, while in the bathroom, Skroob was alerted that Dark Helmet has the princess. As he arrived, he was informed of the air shield's combination, noticing it was the same one he had for his luggage (much to Dark Helmet and Sanders' shock). He then ordered them to depart for Druidia, and to also change his luggage combination number.

Arriving at Druidia, Skroob ran to the observation deck saying that "if he walked, the movie would be over", breaking the fourth wall. Observing the planet, the three then had the ship transform into "Mega-Maid" and it then began to suck out all of Druidia's air. The plan was almost a success until, unbeknownst to them, was stopped by Lone Starr thanks to the power of the Schwartz, and all of Druidia regained its air.

Later, the ship was set to self-destruction, and this forced the crew to abandon ship. In the panic, all of the escape pods were taken, leaving Skroob, Helmet and Sanders on the ship. They then desperately tried to use the "cancellation button", but it was 'out of order'. Therefore, the ship blew up but the three survived in the floating Mega-Maid head.

Some time much later, Mega-Maid's head crashed on a distant planet (a parody of Planet of the Apes). The apes then see the three climbing out of Mega-Maid's nose, saying "Oh, shit. There goes the planet". It is unknown what happened to them afterwards. 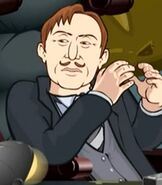