To rule all of Galbadia forever and to achieve world domination.

Vinzer Deling became president of the powerful country of Galbadia after the 2nd Sorceress War ended, after leading Galbadia to victory against the forces of Sorceress Adel, the evil ruler of Esthar. However, he got drunk in power over the years and by the time the game starts, he has become a ruthless tyrant bent on world conquest. In order to gain support quickly, he carried out the invasion of the bustling city-state of Timber as the first of a myriad of independent nations surrounding Galbadia. Once the country itself been conquered during his territorial campaign, Deling took it upon himself to execute the 2 fathers of Zone and Watts, right in front of their children. This atrocious crime fueled Timber's hatred for Galbadia and its president and inspired them to keep the resistance movement alive despite Galbadian occupation.

President Deling allowed the creation of the D-District Prison, which was used to house anti-government sympathizers from both Timber and Galbadia: like many dictatorships, the leaders of resistance groups also faced having family members imprisoned under this regime.

President Deling also began to surround himself with loyalists so as to become a fierce dictator, serving to divide his people further. Due to his dictatoral style of leadership, President Deling was a target for kidnapping by a Timberian resistance movement known as the Forest Owls, who hired the SeeDs, an elite mercenary force meant to protect people from military or supernatural threats, to do just that. However President Deling was too smart to be confined to such a fate and had a body-double stand in for him when the heroes attempted to kidnap him via hijacking a train he was meant to be on.

While this was occuring President Deling made an alternate route to his true destination, Timber TV station, where he planned on producing the first live broadcast in 17 years to the world.

By the time the heroes arrived at Timber TV station, this broadcast was sent and the president spoke to the world about the importance of peace but also stated that a number of problems stood in the way and was preparing to introduce his new ambassador to the world when the broadcast was interfered when Seifer Almasy invaded the station - killing many guards before capturing the President and holding him at knifepoint while Quistis appeared to ask the other mercenaries to hurry to their aid.

Howevering during a heated discussion upon arrival, Zell foolishly reveals that they came from Garden - which President Deling uses to his advantage by stating that should anything happen to him the Galbadian military would no doubt wage war on Garden.

However despite his anger at Zell for jeopardizing Garden's security Seifer refuses to free the President and tries to make an escape.

However his escape is interrupted by the arrival of Sorceress Ultimecia (possessing Edea Kramer as her vessel), who puts Seifer under a strange spell and as a result, President Deling escapes.

However, President Deling's luck would ultimately run out when he was killed by Ultimecia herself after she opted on using her new position of power to usurp her would-be-ally, ending Deling's life via impaling him with her bare hand. 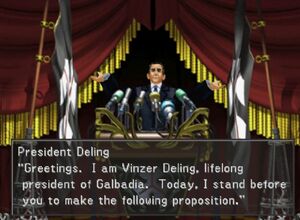 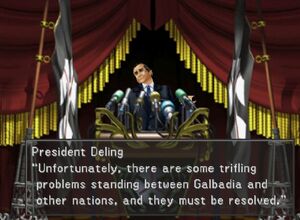 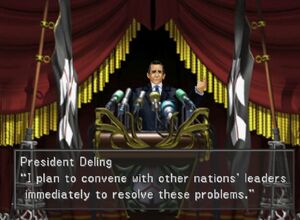 Mr. Vinzer Deling
Add a photo to this gallery

Retrieved from "https://villains.fandom.com/wiki/President_Vinzer_Deling?oldid=2443349"
Community content is available under CC-BY-SA unless otherwise noted.