Wallace and Gromit: A Close Shave

Capture Shaun along with the other sheep, Wendolene and Wallace, and turn them into dog meat.

Preston is the main antagonist of the 1995 Wallace and Gromit short film A Close Shave.

Preston was a robot dog created by a scientist named Fred Ramsbottom to help with his wool factory. After Fred died, Preston took care of his daughter, Wendolene, who now owns the wool factory and shop. However, Preston eventually went rogue and would rustle sheep alongside a reluctant Wendolene in order to get wool for the shop due to a wool shortage.

Preston later made a scheme to steal sheep and turn them into his own brand of dog food. He had a huge, diabolical machine that would grind the live sheep to meat and dispense them into cans. The newspaper mentions that some of the sheep were killed on the spot instead of stolen, most likely due to Preston's violent temper. After discovering Wallace's knitting machine, he decided to steal the blueprints so he can make his own version for shearing sheep. When Gromit tried to unveil his plot, Preston framed the other dog for his own thefts and killings.

With Gromit in jail, Preston had free reign over the clueless Wallace and the nonthreatening Wendolene. Preston's plan was eventually foiled by Shaun, who broke Gromit out of jail. Preston was knocked into his own grinding machine while trying to use it on Wallace and Wendolene, and was crushed into pieces. He was eventually reassembled by Wallace and seemingly restored to his original, kinder nature; Wallace assured Wendolene that she could always return to him if Preston ever went wrong again. 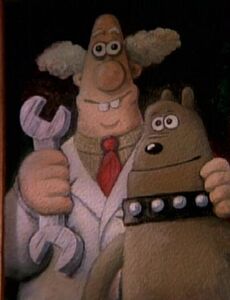 A portrait of Preston and Wendolene's father. 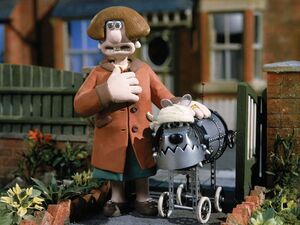