Forcing Pacifica to submit to his standards using a bell.

Bully poor people and the Pines family.
Join Bill Cipher and become his "Horseman" in order to avoid punishment (all failed).

Preston Northwest is a supporting antagonist throughout the Disney series Gravity Falls, serving as the main antagonist in the episode "Northwest Mansion Mystery".

He is the Patriarch of the prominent Northwest Family of Gravity Falls. A rich and influential man and the descendant of the town's supposed founder Nathaniel Northwest (later revealed by Dipper and Mabel Pines to have been a lucky idiot who was handed the credit as part of a government conspiracy to hide the true founder), the husband of Priscilla Northwest and the father of Pacifica Northwest.

In most of his appearances, Preston is relegated to the background and is characterized as simply a selfish rich man. However, Preston later proved to be one of the most callous, unpleasant and outright evil people that Dipper ever faced, in some ways worse than many of the actual supernatural threats he had to battle due to his treacherous, snobbish and manipulating nature.

He was voiced by Chris Parnell in his first appearance. For the rest of the series, he was voiced by Nathan Fillion, who also played Caleb in Buffy the Vampire Slayer, Gao the Lesser in Jade Empire, Captain Hammer in Dr. Horrible's Sing-Along Blog, the Monstrous Inmate in Guardians of the Galaxy, Cornvelious Daniel in Rick & Morty and The Detachable Kid in The Suicide Squad.

Preston Northwest has short dark brown hair and a dark brown mustache, cheekbones, and a large, rectangular nose. He generally wears a black suit with a white shirt and a green tie. He wears a gold ring on his middle finger on his left hand.

Preston enjoys being wealthy and takes pride in being a descendant of Nathaniel Northwest, the alleged founder of Gravity Falls, Oregon. Though it first appears that he and Priscilla Northwest are as snobbish as their daughter, Preston is revealed to be unmerciful and callous man who sees anyone of the lower class as simply tools. He also doesn't truly care for the fellow rich that much either, being willing to leave them to death, as shown when he tries to persuade Pacifica from opening the gates to their party rather than breaking the curse, as well as abusive to Pacifica, and simply sees her as a tool, all merely to preserve the Northwest family name.

Preston Northwest was born into the influential Northwest family, a wealthy American family subject of the Northwest Cover-up, a government conspiracy which covered up Sir Quentin Trembley as the founder of Gravity Falls, Oregon and replaced him with Nathaniel Northwest, Preston's ancestor. Snobbish and prideful like most of his family, Preston grew up believing that money was the key for success and to live well.

When he was young, Preston and his pet fox "Hunter" once met Stanford Pines, who was investing the Northwests' secret scandals. When Ford mentioned the Great Flood of 1863, Preston forcefully had Pines escorted out of the Northwest Manor. This was later recorded by Ford on Journal 3.

According to Alex Hirsch and the comic Gravity Falls: Lost Legends, Preston met his future wife Priscilla during the Ms. Mudflap '85. Preston won the right to marry her in a yachting competition, making her his trophy wife. They eventually had a daughter named Pacifica Northwest. However, Preston raised and spoiled Pacifica to be exactly like him and the rest of the Northwest family.

Preston is introduced in "Irrational Treasure" celebrating Pioneer day with his family and using his relation to Nathaniel Northwest, the Town's supposed founder, as an excuse to lord his superiority over the people, much to Dipper's chagrin.

By the end of the episode, however, Preston realizes that his ancestor wasn't Gravity Falls' founder after all when Dipper hands Pacifica the necessary evidence to prove that her ancestor was a fraud and it was Quentin Trembley the true founder. However, by his next appearance, it's confirmed that Neston offscreen covered up the evidence that proved his ancestor of being a fraud.

He later returns in "The Golf War" to drop his daughter off at a match between her and Mabel, however rather than stay to support his daughter, he and his wife leave to go to a party– offering her the words of advice: "Don't lose".

But its not until "Northwest Mansion Mystery" that Preston demonstrates just how evil a man he truly is, in fact serving as the main antagonist of the episode. Preston's ancestor Nathaniel had manipulated local lumberjacks into building what became the family mansion 150 years earlier, by promising he would use the space for a great public service– an annual party held by the family for the workers in the community. However, on the day of their party, the Northwests refused to let in the Lumberjacks and hold up his end of the bargain– instead laughing them off and enjoying a soiree for the rich. Adding injury to insult, the mass removal of the mountainside trees caused mudslides that same evening which killed several of the lumberjacks. One lumberjack among those who died swore a curse on the Northwest line with his dying breath; unless they agreed to honor the promise and let the common folk into their annual party after 150 years he would return to seek revenge.

As the curse began to come true, rather than opening the gates and letting the common folk in to break the curse, Preston instead forced his daughter to manipulate Dipper into getting rid of the ghost. Its revealed in this episode as opposed to simply being neglectful, Preston is outright emotionally and psychologically abusive towards Pacifica– going so far as to train her to respond on command to a small bell he keeps on his person (like a dog).

After Dipper successfully trapped the ghost in a silver mirror, Preston thanked him and then began to welcome his guests. However upon learning the truth from the trapped ghost, Dipper furiously storms back in the northwest mansion and confronts Preston for his callousness and deception. While Pacifica attempted to apologize to Dipper, Preston intimidated his daughter into silence before smugly and callously dismissing Dipper and his anger, reminding him that this would be the last time anyone of "his kind" (the common-folk) would be allowed at his party.

However, the ghost managed to free itself from the mirror and began terrorizing the party, transforming the guests into wooden statues and causing general mayhem. Rather than agree to break the curse and save his guests, Preston instead hid with his wife and a butler in a panic room, leaving everyone else to their doom.

Once the ghost had turned everyone into wood, it planned to burn the mansion down killing everyone. However, Pacifica (having received renewed confidence from Dipper) decided to go against her family's legacy by breaking the curse. However, Preston was watching the scene from a trap door, and emerged to order his daughter to leave the gates closed and join them in the panic room (he also reveals his plan to kill and eat the family butler if their food ran out before the ghost left). However, finally standing up to her psychologically abusive father, Pacifica opened the gates, letting the common people in and breaking the curse for good. This undid the ghost's damage and saved everyone as he peacefully leave at Pacifica's kindness. Afterwards, a horrified Preston starts to complain about the common folks invading the party.

In "Weirdmageddon Part 1", Preston attempts to offer an allegiance to the dream demon Bill Cipher after he melts the Nathaniel Northwest Statue, despite Pacifica scorning him for it. Bill chooses to disfigure his face by rearranging his facial features instead. Preston collapses in front of a screaming Pacifica and Priscilla.

In the series finale "Weirdmageddon 3: Take Back the Falls", it is shown that Preston and Priscilla were petrified and added into Bill's throne of human agony along with many other citizens while Pacifica evaded capture. Eventually, Dipper, Mabel, and their friends were able to free the citizens, and Preston's face was returned to normal. When Pacifica was called in to help to stop Bill, Preston (doing the right thing for once) encouraged her to do so. Following Bill's death and the end of Weirdmageddon, Preston was among the people delighted that everything was finally back to normal. However, he was ultimately forced to sell his mansion in order to maintain his family's wealth due to his attempted allegiance with Bill, much to his distress. He is last seen crying hysterically as the mansion is put on for sale, eventually getting bought by Old Man McGucket. This is the last time we see Preston in the show and he doesn't attend the Pines twins' 13th birthday party unlike Pacifica, but it's presumed that by losing some of his wealth, Preston no longer enjoys the respect and power he once had but finally never deserved. 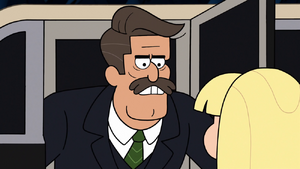 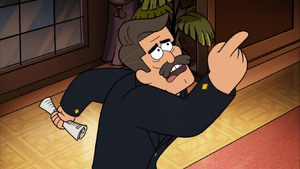 "You are my possessions. Obey me!" 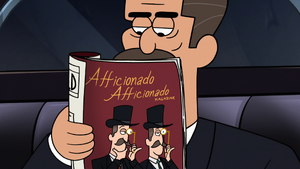 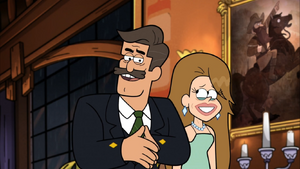 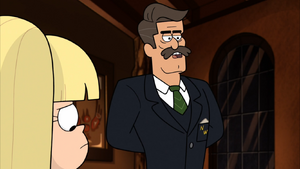 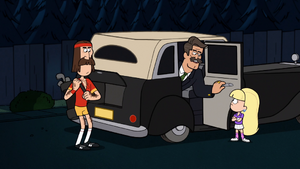 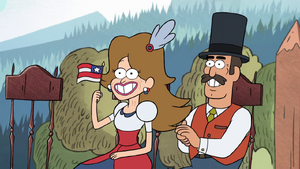 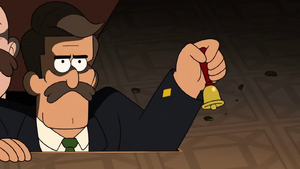 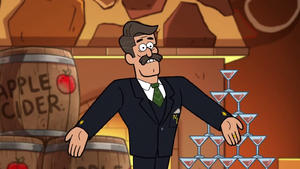 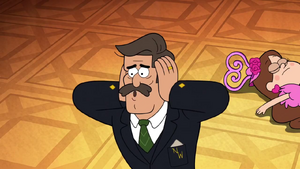 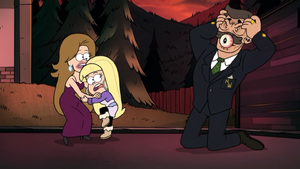 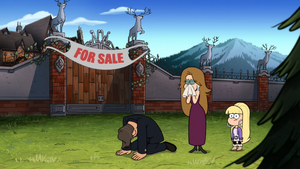 Preston's 2nd defeat in Weirdmageddon 3: Take Back the Falls.