Fourth and only female member of the Five Dastardly Bombers

Member of Buggler's army (formerly)
Member of the Bomberman Bros.

Pretty Bomber is an antagonist in the Bomberman series. She is the only female member of the Five Dastardly Bombers, and the only one who later on fully redeems herself.

Pretty Bomber first appears in Super Bomberman 2, acting as the boss of World 3-7. She utilizes heart-shaped bombs that are mobile, capable of wandering short distances before exploding. After losing the battle in World 3-7, Pretty Bomber enters her giant robot, Mask Change, to act as the boss of World 3-8. Mask Change resembles a giant sun with a face and attacks via throwing heart-bombs and eight star-shaped energy blasts. After this robot is defeated, Pretty Bomber is seemingly destroyed when her area is blown up by Bomberman following the battle and he moves on to deal with the remaining villains of the story.

Pretty Bomber is one of the last foes in this game, fought alongside Golem Bomber.

Pretty Bomber returns in this game as a wandering foe. She challenges Bomberman to avenge his presumed dead partners.

Pretty Bombers returns alongside her team in Super Bomberman 3. She is also a playable World Bomber in the game's Battle Mode, representing France.

Pretty Bomber is after the Gold Bomber statue, and attacks Bomberman after he defeats Bombpire.

Pretty Bomber is a "damsel in distress" in this game, kidnapped by Buggler.

Pretty Bomber returns in this game as a rival racer.

Pretty Bomber is only an antagonist in the first game of the series, acting as a mischievous thief. Later games in the series have her as a protagonist.

Pretty Bomber returns to her team in Bomberman Tournament, controlling Pretty Base to pollute the water. She fuses with the Pommy Sea to become PrettyBalloon.

Pretty Bomber uses the alias of Karaoke Bomber in this game. She is first seen deactivated, she is revived by Buggler to take over the galaxy. She is encountered on World 4: Planet Lalaland. First attempting to seduce Black Bomber due to him not wanting to fight a woman, she later fights the group on foot, and then uses the Elegant Dream. After loosing and fleeing, Pink Bomberman notices her pendant and reveals her true identity. In this game, she apparently is the secret ninth member of the Bomberman Bros, who perished before all of them were built.

After Buggler makes his black hole, she is fused along with his teammates into the Great Gattaida. After this fails, she then joins forces with Bomberman to defeat him.

As Pretty Bomber, she wears a pink dress-like body with white limbs. A large heart is on her forehead and on her belt.

As Karaoke Bomber, she has a pink body with a mask covering her face and a yellow cracked heart on her forehead. She also wears a black dress and cape with red lines and wears a sash with a skull bomb on it.

Pretty Bomber is portrayed as a calculated, confident and seductive, using her looks to her advantage. However, she has a kinder and sweeter side to her. She also enjoys to sing and does it well. Oddly, as Karaoke Bomber, her singing voice is terrible. 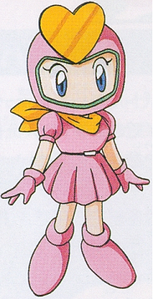 Pretty Bomber's design in Bomberman 2.
Add a photo to this gallery

Retrieved from "https://villains.fandom.com/wiki/Pretty_Bomber?oldid=3462338"
Community content is available under CC-BY-SA unless otherwise noted.