Servant of the Brotherhood of Makuta (formerly)

Leading the other Barraki.

Lead the Barraki to obtain the Kanohi Ignika to regain their original forms in order to reclaim their empire.
Eliminate anyone who hinders his goal.
Conquer the Matoran Universe and rule it through fear.
Seek revenge on Makuta Teridax.

Pridak is the major antagonist in the BIONICLE franchise. He also serves as the primary antagonist of the Mahri Nui arc.

He was originally a servant of the Brotherhood of Makuta before becoming an unofficial leader of both the Barraki and the League of Six Kingdoms. In his quest for power, Pridak seek to overthrow the Great Spirit and rule the Matoran Universe with his iron fist, though he and his army were ended up defeated by the alliance of the Toa Mangai, the Order of Mata Nui and the Brotherhood and he and the rest of the Barraki were then imprisoned in the Pit.

When the Pit was destroyed by the Great Cataclysm, Pridak and the other Barraki broke free from their cells and escaped into the ocean where they were mutated by the mutagen into their sea-creature forms. Unable to reclaim their empire in the surface, Pridak led the other Baraki and their new army of sea Rahi to invade Mahri Nui and claim the Kanohi Ignika to turn them back into their original forms and resume their campaign of conquest.

In the animated show, he was voiced by William Jordan, who later voiced as Makuta the Mask Hoarder in BIONICLE: Journey to One.

Pridak was a hot-tempered, mercurial and fiery leader of the Barraki and the League of the Six Kingdoms. He despises failures and insubordinations as he would not hesitate to reward them with pain and death. However, he was also very shrewd, practical, calm and composed, as he did not seek to attack the Matoran and persuade his allies not to harm them as he believed that they were meant to be useful for the Barraki's schemes.

Pridak was also known to despise Makuta Teridax due to their past encounter as he did not hesitate to defy him on his face. He was also almost as a complex thinker as Teridax. His hatred towards Teridax and the other Makuta was especially intense, as he alone once worked as little more than a slave of the Brotherhood of Makuta in the past. However, he also turned out to be as intelligent, manipulative and cunning as Teridax.

He was also proved to be the most vicious, sadistic, cruel and ruthless among the Barraki as he does not hesitate to eliminate anyone who challenged him or hindered his goal as he was willingly to use his ruthlessness and abuse towards the others such as; ordering the execution of the leader and his own unit for not doing their duty, blinding one of Kalmah's eyes and bit off one of Nocturn's arms during the argument and even disposed Defilak to be eaten by his Takea sharks, though the former survived.

He also took great pride in his appearance and viewed his mutation as the worst fate that he could dealt with.

He also viewed himself as the superior being who was born to rule and conquer as he believed himself of entitling to power, making him completely egocentric as anything he does in order to maintain his position of power is simply true to himself while disregarding the others' lives as power is everything to him and sought to dominate the universe and rule it through fear and strength.

When Pridak was cursed by Kanohi Ignika's power, he became insane, aggressive, paranoid and incredibly violent. His blind rage became extremely pushed to the limit even at this point that he nearly turned against his fellow Barraki and later killed Ehlek, Nocturn, Carapar and Takadox in a murderous rage. Eventually, he wasn't aware that he was been possessed by Karzahni all along until the end, which was also caused by his own short-sightedness.

Pridak and the rest of his species were created 95,000 years ago by the Great Spirit, who also created six sapient species at the time in the Matoran Universe. However, the war broke out in his home island and destroyed the rest of Pridak's species, leaving him the sole survivor. He eventually believed that the stronger beings like him should survive and capable of ruling the universe and the weak should served the the strong beings. With that, he planned to conquer the entire universe and rule it.

Sometimes later, he was confronted and employed by the Brotherhood of Makuta as both their servant and aide of Icarax as well as given a small territory to rule over.

When Miserix, the leader of the Brotherhood, ordered Mutran and Icarax to travel to Xia to order the Vortixx to lower the price of the goods for the Matoran, Pridak accompanied both the Makuta as the three then journeyed to Xia. While Mutran and Icarax negiotated with the Vortixx, Pridak was intrigued by the island's city and its resources. However, he was caught up by Mutran and Icarax as they forced to knock him out and dragged him off the island.

Founding of the League of the Six Kingdoms

A few months later, Pridak left the Brotherhood's service and began his life as the warlord. He later recruited the other five members of the respective species; Kalmah, Ehlek, Carapar, Mantax and Takadox, who was employed by the Brotherhood to keep an eye on him and formed the League of Six Kingdoms and became the Barraki.

Banished into the Pit

After their defeat, Teridax intended to have the Barraki killed as punishment for their crimes but Botar rejected his suggestion despite Teridax's objection. Then suddenly, alongside with Hydraxon and a few Maxilos Robots, Botar decided to took the Barraki and transport them into the Pit.

During their stay in the Pit, Pridak and the other Barraki stayed prisioners in the Pit, until the Great Cataclysm, an earthquake eventually destroyed the Pit and as the result, Pridak and the Barraki escaped into the mutagenic ocean. Once done, Pridak then reunited by force the rest of the Barraki and they began to create an army of underwater monsters when they learned that they could not reclaimed their kingdoms outside.

Quest for the Mask of Life

After the Mask of Life sank into the ocean where Mahri Nui and the Pit were located, Pridak and the other Barraki began terroizing the native Matoran in an attempt to divulge information about the mask. Pridak and his Takea sharks assaulted Defilak's submarine, taking its Matoran passengers prisoner. Defilak agreed to show Pridak where the mask was, and took him there. However, when a venom eel attacked them, Pridak abandoned Defilak to fight the eel. Pridak then met up with Mantax, Carapar, Ehlek, and Brutaka to search for the Mask of Life. They found it in the possession of the Po-Matoran Dekar. Pridak took the mask from Dekar, but when he did, it enhanced his rage and madness. Pridak threatened to harm Kalmah, but Takadox used his hypnotic powers to calm him down. The Barraki took the Mask of Life to their ally Nocturn and tasked him with keeping it safe. Later, Pridak and Takadox encountered the Toa Matoro, along with a Maxilos robot that was possessed by Makuta Teridax. They were overpowered in the ensuing battle, and were forced to retreat. The Barraki then gathered at Razor Whale's Teeth, where Mantax revealed that there was a traitor in their midst. After Takadox owned up, the Barraki were attacked by Hydraxon. During the battle, the Toa Mahri snuck in and stole the Mask of Life. The Barraki drove off Hydraxon and destroyed the Maxilos robot that Teridax was possessing. They then pursued the Toa Mahri with their armies. Matoro went ahead with the Mask of Life while his teammates stayed back and fought the Barraki. The Barraki began to get the upper hand on the Toa, but the Toa were transported out of the Pit by the Mask of Life. After the battle, Pridak found evidence that the "Hydraxon" that had attacked the Barraki wasn't the original Hydraxon. Pridak attampted to convince this Hydraxon otherwise, but Hydraxon refused to listen and locked Pridak up in the Pit.

Pridak and the other three Barraki (which did not included Takadox and Carapar due to them imprisoned in the different cell) were locked up in the cell and remained there. Not long after, they were approached by Hydraxon who offered their chance of fighting the Brotherhood of Makuta with the Order of Mata Nui as Pridak accepted the offer while seeing an opportunity of rebuilding the League of Six Kingdoms.

He was later given with the new army which consisted of ex-Dark Hunters, exiled Vortixx and Skakdi which were arranged by the Order and he also recruited several Pit prisoners; Drewdika, Tinnurron, Xyron, Zakron and Zarnak.

Then, Pridak led the League to venture out and conquer once more. They began by attacking the Makuta Fortress as the army managed to slaughter the entire army of Rahkshi and the Makuta who were defending the fortress. Pridak was then reported by Mantax who revealed to him that he found the mound of rubble with the details of the Brotherhood's plan. Believing that it was destroyed by someone who did not want the information to be known and also have some value, Pridak had Mantax piece the wall back together.

Later, Pridak learned about the detail of the Brotherhood's plan and sent the other Barraki to propose the alliance

When being cursed by the Kanohi Ignika, his strength increases as he was capable of defeating Teridax and even the combined efforts of the Toa Mahri. However, there was the severe side-effect of the curse is that he became aggressive and violent as he attacked anyone around him in the blind rage. 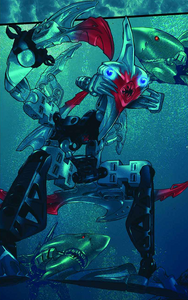 Pridak commanding the Takea sharks in the comics. 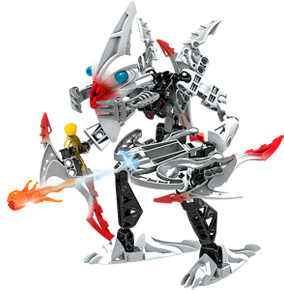 Pridak in the set form. 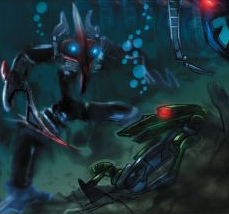 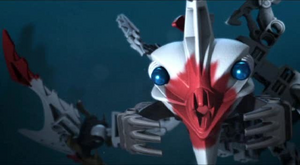 Pridak in the promo video.