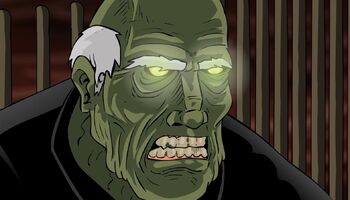 The nameless Priest is the deuteragonist of the Paladin series. He was the one who raised the young Auron until the day he can become the Paladin.

Until the third act, he is mostly a protagonist who selflessly raised the young Auron in the ways of the sword and the holy rights of the faithful.

When Auron was captured on top of the spire by Radiel the Necromancer, he toyed with him by killing his bird companion and trapping inside a magical wooden barrier. To break him even further, he decided to give him a "family reunion". From the middle of the spire, the undead priest was lifted on top of the platform.

Auron spoke to his former mentor, talking to him with compassion, but to no avail. The priest was a complete mindless minion and ignored all his advances. Compassion soon turned to frustration as Auron was constantly being attacked by him. Seeing no other option, Auron lifts the priest into the air and cutting the magically wooden barrier, the priest was impaled, ending his undead life.

Following the defeat of Kognor, the priest along with the others who fell into undead, were resurrected and given a second chance at life.