Priestess of the Alien God

Thus far, the Priestess' information and ultimate goal remain in mystery, and she is yet to speak a single word. However, both Koyanskaya and Kirschtaria Wodime are shown to communicate with her, although she never shown to speak a noticiable verbal work, until she began to communicate with the dying Gods of Olympus in the void, where she was finally seen speaking. Before Chaldea's destruction, she was also shown to have overwatching Ritsuka Fujimura and Mash.

Although at the Alien God's side, the Priestess also somehow helped the Chaldea crew to destroy the Fantasy Tree from Russian Lostbelt. She also appears in several random occations with a habit of just watching and leaving soon after, like during the meeting to the Crypters, or the imprisonment of Koyanskaya by Emperor Qin Shi Huang.

However, after the Chaldea crew's confrontation against Kirschtaria became an epic fail, the Priestess appeared not far away from them, with Holmes noticing her and discovered she had great comtempt for the crew.

In addition, the Priestess' existence or prescence would never be detected through any mechanical means, and could only be discovered through seeing her. Everything that is surrounding her is also as otherworldly as much as possible, and even her own seemed to lack an understanding on her nature or her identity. Above all, the Priestess is apparent aware of the Crypters' treachery against the Lostbelt Kings and even her master, the Alien God itself, but she neither report nor take further actions to prevent it. 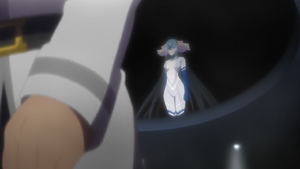 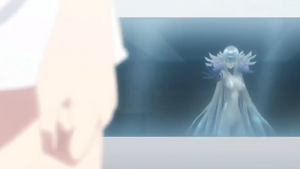 The Priestess reaching out to Mash 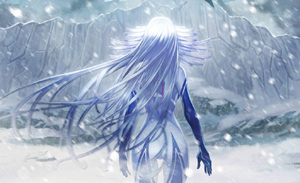 The Priestess in front of Orochi, the Fantasy Tree of Russian Lostbelt 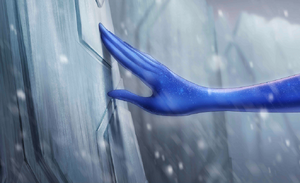 Retrieved from "https://villains.fandom.com/wiki/Priestess_of_the_Alien_God?oldid=3891330"
Community content is available under CC-BY-SA unless otherwise noted.