Kill the player and his partner.

Primal Dialga is the final boss of the main storyline of Pokémon Mystery Dungeon: Explorers of Time, Explorers of Darkness, and Explorers of Sky. Primal Dialga is a form of Dialga who lost control over his ability to control time due to the collapse of his lair, Temporal Tower. He is unable to show logical reasoning and only seeks self-preservation. He is the main antagonist of the game (the secondary antagonist if counting the post-game). After being defeated, he comes back to normal and restores everything that his insanity destroyed.

Dialga entered his Primal state when Darkrai stole the Time Shifts from Temporal Tower, causing its collapse and the subsequent disruption of time. In the Future, Primal Dialga is solely concerned with self-preservation; as changing history would cause Primal Dialga to cease to exist, he attempts to halt any plan to prevent the collapse of Temporal Tower.

When Grovyle and the player travel back in time in an attempt to collect the Time Gears and prevent the collapse of Temporal Tower, Dialga sends his follower, Dusknoir, to pursue and capture them. Primal Dialga does not appear in the storyline until Dusknoir drags Grovyle, the player, the player's partner back to the Future. Following the protagonists' escape from execution, Primal Dialga assists his followers in trying to stop the protagonists from going back in time, but fails. 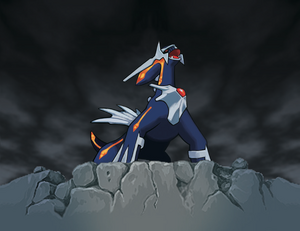 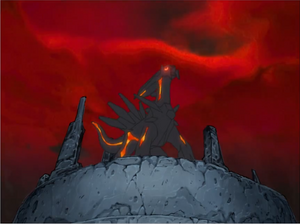 Primal Dialga in the "Beyond Time & Darkness" anime special. 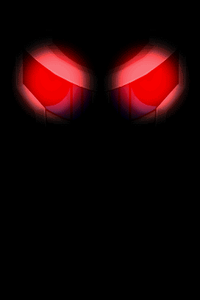 Close-up on his eyes in the future.