The First Minister
The Prime Minister

Prime Minister and de-facto ruler of the Empire

Bring disgrace to the Empire.

Kill all of his opponents.
Destroy Night Raid and the Revolutionary Army.
To corrupt Makoto and then spread the corruption in the Empire will continue even after his death.

Honest, also known as Prime Minister Honest, the Prime Minister and the First Minister, is the main antagonist of the manga/anime series Akame Ga Kill!. He is the Prime Minister of the Empire and himself seized control over the Empire while the emperor is a child. He manipulates Emperor Makoto for his own ends, bringing suffering through his orders by manipulating his innocence. Honest secretly rules the Empire in the shadows, bringing misery, hunger and poverty throughout the land.

He is voiced by Kouji Ishii in the Japanese version of the anime and Marty Fleck in the English version.

It is stated that Emperor Makoto only won the battle of succession due to the Prime Minister's influence and planning. The Prime Minister before him was Chouri, a man that was a kindhearted but strong willed and a strong adviser to the former emperor, who desired to return to the capital to stop the decline of the empire. When the Prime Minister became aware of this, he had Esdeath's force's (The Three Beasts') tasked to kill him. He is known to have one son, and he is also known to have one blood relative named Iwokura, who was killed by Night Raid.

Honest is a round, middle-aged man with light skin, gray hair, dark yellow eyes, and a long white beard that extends down to his abdomen. He often sports a sinister, toothy grin whenever he is plotting something nefarious. He wears a pair of brown boots, a dark green shirt, a belt below his belly and short pants which are also dark green, and a gray coat with some hair of an animal around his neck, resembling a bourgeois.

Honest embodies the very worst in humanity; he is extremely heartless, manipulative, uncaring, cruel, and sadistic. He is pleased to mentally abuse people with the power he has, and he does not care about the country or the people around him begging for his help for a better life. In nearly every scene he appears in, he is always seen gorging himself on food with little care for his table manners. He is also implied to be a cannibal as shown when he oversees the Emperor ordering the execution of an innocent man while voicing his approval, and smugly tells him that he will make sure to take "care of his wife... every single part of her" while casually chowing down on some food. Honest appears to be an extravagant, wealthy, and rich supremacist who thinks he is above everyone else. He is able to commit any atrocity possible, in order for him to get a higher power.

On the surface, he is a nonviolent and quiet man who appears to be gentle, peaceful, soft-spoken, and harmonious in almost all his interactions with the young emperor. However, behind the mask of man who appears to be responsible, hides a demon who shows no sympathy for any human in the world. He does not regret anything cruel in what he does, seeing them as nothing more than another step to achieve his goals of getting more power over the country.

He also shows a like of the psychological suffering of people, making them feel like nothing and making them fear him. Honest always hides his facial expressions when he speaks of something that can make a person be intimidated by fear and always hides the true monster that he is behind his jolly facade. 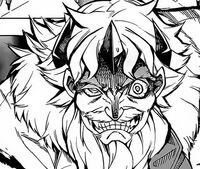 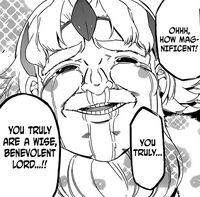 Honest throws Leone off the balcony. 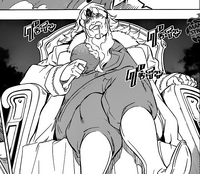 Honest on his throne enjoying the destruction of the rebels. 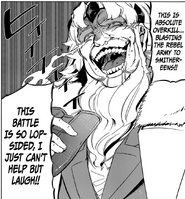 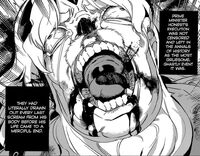 Honest's Death in the manga
Add a photo to this gallery