Kill Shrek and avenge his mother, Fairy Godmother, by being the new king of Far Far Away (in Shrek the Third; all failed).

He was voiced by Rupert Everett, who also played Lord Rutledge in Dunston Checks In, Doctor Claw in the 1999 Inspector Gadget film, Sloan Blackburn in Nickelodeon's The Wild Thornberrys Movie, Carnaby Fritton in St. Trinians, and John Lamont, one of Mr. Barron's disguises in Miss Peregrine's Home for Peculiar Children.

In the second film, Charming is an arrogant, snide, childish, traitorous, and snobbish man who wants to marry Fiona to rule her kingdom. In the third film, he is a bit different. He is mean, abusive, charismatic, manipulative, and more focused on becoming king of Far Far Away. The only person he cares for is his late mother, the Fairy Godmother.

Although Charming does not appear physically in the first Shrek movie, he was briefly mentioned by Shrek, in which Fiona reveals that she thought that she would be rescued by a Prince "Charming", probably told to her by her parents.

Prince Charming later makes his first appearance in Shrek 2, where he served as the secondary antagonist, being more of a comic relief, his mother the Fairy Godmother being the main antagonist.

He first appears traveling to the castle, where Princess Fiona had been imprisoned, only to discover that Shrek has already found her and married her, and that Big Bad Wolf (without any explanation how he got there in the first place) has taken to sleeping in her tower. When Charming asks Wolf where Fiona is, he tells him she's on her honeymoon. Charming, surprised, then asks whom.

Later Charming is seen with Fiona's father, King Harold, the king of a kingdom called Far Far Away and Fiona's Fairy Godmother It is revealed there that Charming is in fact the son of the Fairy Godmother, and with his mother's thorough support, he wants to marry Fiona so that he can become king and he is not happy that he, as his mother puts it, "Endured blistering winds and scorching deserts and climbed to the highest bloody room of the tallest bloody tower only to find a gender confused wolf telling him that his princess was already married.", and Fairy Godmother demands that Harold get rid of Shrek so she can be with Charming.

Later in the movie, after Shrek, Donkey and their new friend Puss-In-Boots steal Fairy Godmother's Happily Ever After potion and trash her factory, Charming enters, notices the mess and asks what happened, and she tells him Shrek was there. Charming then demands to know where Shrek is so he can kill him with a sword. However Fairy Godmother talks him out of him, stating he'll be king. After learning Shrek took the Happily Ever After potion, they use it to their advantage, and Charming arrives at the Far Far Away castle and tricks Fiona (who was now human again) into believing that he's Shrek. Charming greets Fiona and both her parents and convinces them he's Shrek. Harold recognizes Charming for who he really is but doesn't say so.

While Charming does this, his mother makes sure the real Shrek, who had been turned into a human by the Happily Ever After potion, doesn't reach Fiona. Later Shrek, Donkey (who drank the potion and became a horse) and Puss spy on Harold, Charming and Fairy Godmother at The Poison Apple. Harold tell them that Fiona is not warming up to Charming, to which he says it's not his fault, and that he can't woo Fiona, pretending to be a "dreadful ogre." Fairy Godmother then demands that Harold give Fiona a love potion that will make her fall in love with Charming if she kisses him. Harold refuses, but Fairy Godmother warns Harold she could take away his happy ending. After Charming calls Fairy Godmother 'Mother'. Donkey shouts "Mother?", causing them to see Donkey with Shrek and Puss and realize they have been listening the whole time and having them arrested and imprisoned.

Later, Charming tried to woo Fiona, even though she was disgusted with him. Fairy Godmother sings "Holding Out for A Hero" to which Charming and Fiona dance to. Right when Charming is about to kiss Fiona, the real Shrek arrives with Donkey, Puss and their fairytale friends (who had rescued the trio). They then take away Fairy Godmother's wand. The Fairy Godmother orders Charming to kiss Fiona and he does so, and she appears to have fallen in love with him, but then she suddenly puts her two hands on his cheeks and does a Karate shout and head-butts him, knocking him out, as Harold didn't give Fiona the philtre. Prince Charming then recovers, grabs his mother's wand from Puss, and tosses it to her. Fairy Godmother catches her wand and aims it at Shrek but Harold blocks it. The ray reflects off his armor and hits the Fairy Godmother, turning into a burst of bubbles.

Afterwards, Charming is forced into dancing with Doris.

Charming later appears in Far Far Away Idol, the short film on the original Shrek 2 DVD. He sings I'm Too Sexy, but Shrek and Fiona push a remote to activate a trapdoor beneath Charming's feet.

Charming later returns in Shrek the Third, this time as the main antagonist, having a fairly major role. He is first seen in a theater, playing himself due to his name. However, despite being the hero in his own play (which appears to be a spoof on the classic fairytale, Rapunzel), the audience cheers when the "Shrek" mascot comes onstage, along with Shrek's friends, who are there watching the show. Finally (in a version of a Buster Keaton gag), a prop tower falls on Charming, but he escapes injury as the window passes around him. Charming leaves the theater upset and goes to his "dressing room" (in reality, the back alley behind the bar) and starts sobbing at his misfortune. There, Charming vows to his mother (whom he has a picture of) that he will become the king of Far Far Away and kill Shrek to avenge her death.

Later, after seeing King Harold's funeral, Prince Charming goes to The Poison Apple and organizes an army of villains - Captain Hook, Stromboli, Headless Horseman, Evil Trees and Witches - all upset that they haven't gotten their "Happily Ever After" and encourages them to help him in his plans of revenge.

While Shrek, Donkey, and Puss are in search of the heir to the kingdom, Fiona's cousin Artie, Charming and his new friends attack the castle. When Charming sees Wolf, Gingy, Pinocchio, and The Three Little Pigs, he demands to know where Shrek is. They deny knowing anything, then Charming orders them to cooperate with him, because he will be the new king of Far Far Away. Gingy states the only thing he'll be king of is King of 'Stupid'. Then Captain Hook demands Gingy tell him where Shrek has gone, and Gingy goes into a dream. Charming then asks Pinocchio about Shrek's whereabouts, knowing he can't lie. So Pinocchio told Charming a twisted up version of the truth while trying not to tell the truth but trying not to lie at the same time, something that confused everyone. One pig couldn't take it any longer and told Charming that Shrek was out bringing back the new heir. Charming then orders Hook to kill the new heir and bring Shrek back alive so he can kill him himself.

Later Charming is seen again with his new girlfriend Rapunzel who brings Fiona and her princess friends to Charming who has them imprisoned.

After Shrek, Donkey and Puss return to Far Far Away with Artie (thanks to Merlin), Charming is seen getting ready for a show where he plans to kill Shrek in front of the whole kingdom, when Shrek confronts him in the dressing room and demands to know where Fiona is. Charming then summons his soldiers to come capture Shrek, Donkey, Puss and Artie. Charming prepares to kill Arthur when Shrek tells him to spare Artie, stating that he is the one Harold wanted to be king first and Artie is just a pawn. Charming spares Artie but has Shrek restrained with chains and Donkey and Puss (who had switched bodies) imprisoned with Fiona.

Charming then begins the plan and soon places Shrek in the play, now being performed in an auditorium before the entire kingdom. After being brought on stage, Shrek begins to ruin it for Charming by insulting him, making everyone laugh. As Charming is about to kill Shrek onstage with a sword, Fiona and the others burst in, getting ready to fight the villains. However, the villains overpower the heroes when suddenly Artie arrives and convinces the villains to give up their evil ways, and they do so.

However, Charming refuses to listen, and prepares to kill Artie, when suddenly Shrek breaks free of his chains and Charming stabs him instead, but (as Shrek reveals to the others) Shrek is completely unharmed; Charming (with his bad aim) merely stuck the sword between Shrek's arm and side. Shrek then picks up Charming and Charming says "This was supposed to be MY happily ever after!" and Shrek says "I guess you need to keep looking, because I'm not giving up mine!" and then tosses him before Dragon, who tips over the stone tower with her tail, which falls on Charming right after he says "Mommy?", defeating him. The crown then goes rolling and Artie puts his foot on it.

It is debated whether or not he survived the ordeal, as some say the empty window of the stone tower landed on him in a similar style to the cardboard tower at the beginning of the film.

In Shrek Forever After, he makes a cameo during the credits. He was originally meant to properly appear in the film, but was cut.

He appears in the TV special Scared Shrekless in Puss and Donkey's scary story. 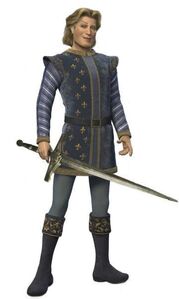 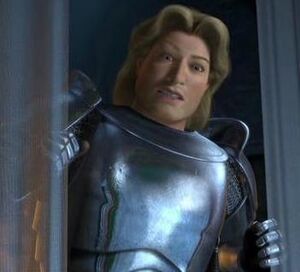 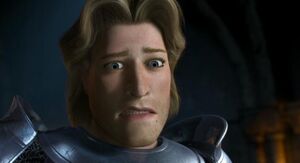 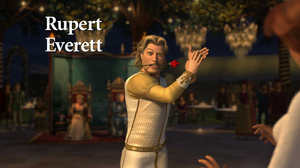 Prince Charming in the Shrek 2 credits. 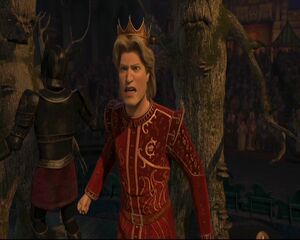 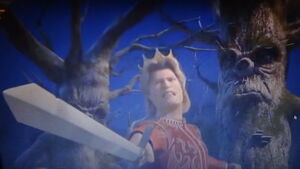 Prince Charming as a zombie. 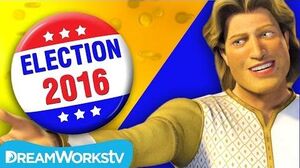 Prince Charming Just Like You, But Better Charming2016
Add a photo to this gallery

Retrieved from "https://villains.fandom.com/wiki/Prince_Charming_(Shrek)?oldid=3427577"
Community content is available under CC-BY-SA unless otherwise noted.