Prince Diamond, also known as Prince Demand and Prince Demande, is the leader of the Black Moon Clan and the secondary antagonist of Sailor Moon R.

As the founding leader of the Black Moon, Prince Demande saw the Crystal Tokyo and the reign of Neo Queen Serenity as an ambition duel to the Legendary Silver Crystal prolonging human life by a millennia. Demande and his followers were lured by Wiseman to Nemesis where they acquired the power of the Malefic Black Crystal.

While the plan was to travel back to kill Neo Queen Serenity when she was Usagi Tsukino, Demande acted in rush to directly attack Crystal Tower by sending a Black Crystal fragment large enough to level the city. It was then that Demande encountered Neo-Queen Serenity while she was looking for her daughter Chibiusa, becoming obsessed with her from both her glare and witnessing the Legendary Silver Crystal's power before hand.

This obsession included Usagi whom Demande abducted when she traveled from her time to 30th century Japan. Demande held her in Black Moon Castle before she managed to escape with her friends as the palace collapsed when the Malefic Black Crystal Reactor underwent a melt down.

Prince Demande then realizes he was simply being used by Wiseman and revolted against him after feigning to have fallen under his control, forced to kill his own brother while unmasking Wiseman as Nemesis itself. The latter act drove Demande insane, stealing the two Silver Crystals from Black Lady and nearly causing the destruction of space-time continuum were it not for Sailor Pluto's intervention. While the manga has Demande die fighting Sailor Moon and Tuxedo Mask, Sailor Moon Crystal depicts him sacrificing his life to shield them from Wiseman's attack.

He was manipulated by Wiseman into attacking Crystal Tokyo and taking over the Earth. Finding Crystal Palace to be invincible, he sent one of his commanders, Rubeus, to the past to take over Tokyo by securing crystal points. However, Rubeus's plans were all foiled by Sailor Moon, and after his death, Diamond sent Emerald into the past to carry out her plan of taking over Tokyo by filling its vulnerable spots with dark energy. After several failed attempts, Diamond called her back.

Demand can shoot energy waves and energy balls (not unlike Dragon Ball Z style attacks). He also possesses the ability Evil Sight, opening a third eye on his forehead that allows him to hypnotize or psychically immobilize his opponent. 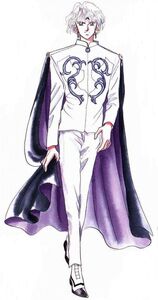 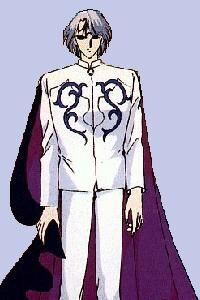 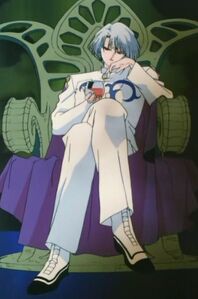 Prince Diamond as he appeared in the 90s anime.