The Princess and the Goblin

Scheming of the goblin uprising.

Doing nasty things to humans.
Hanging with his mother.
Playing with his cat.
Eating insects.

Marry Irene and become ruler of the humans.

Reclaim the surface world for goblin kind (both failed).

Prince Froglip, also simply known as Froglip, is the main antagonist of the 1991 animated fantasy film The Princess and the Goblin. He is the son of the Goblin King and the Goblin Queen, making him the Goblin Prince, and he seeks to marry Princess Irene, so the "sun people" will have no choice but to accept the Goblins as their rulers.

He was voiced by the late Rik Mayall, who later played Cufflingk in Valiant, Richie Rich in Filthy, Rich & Catflap, Rick in The Young Ones, Drop Dead Fred in the film of the same name, Robber Hag in The Snow Queen, Alan B'Stard in The New Statesman, and Richard Richard in Bottom.

Froglip is a tall young goblin, implied to be pubescent, with grey green skin, a snub nose, and a lean toned build. In contrast to his grey green skin tone, Froglip's hair is bright neon pink; his curly hair comes out in puffs on the sides of his head complete with a mohawk on top of his head. In the animated movie, Froglip has only a single toe on his feet like the majority of goblins, though his novel counterpart had three toes due to his human heritage.

Prince Froglip is portrayed as a cruel, xenophobic goblin prince who is spoiled by his fearsome mother. Like all goblins, he expresses a desire to gain revenge on the sun people, the goblin name for humans, for forcing goblins to live underground. He doesn't seek to kill all humans, though not out of the goodness out of his heart, but because he plans to have them brought under goblin dominion instead.

Despite his great ugliness, he (like most goblins) viewed humans as extremely grotesque. Froglip hopes after the humans are forced to live underground, in time they too would develop the monstrous features of goblins without the sunlight.

Prince Froglip also has the tendency to lisp and spit a lot when he talks, and he is also prone to overly dramatic gestures and clothing.

Long ago, Froglip's ancestors shared the surface world with their bitter enemies, the humans, but they were forced beneath the earth after losing a war with humanity. Overtime in the dark catacombs beneath the Earth, the goblins evolved into a grotesque race of monsters. But the Goblins never forgot that they once shared the sunlight and for generations, plotted their revenge on humans and their royal family.

By the story's present, Curdie the miner boy, manages to sneak into the underground Kingdom of the Goblin as a meeting is taking place. In the meeting, the The Goblin King and Queen hold a meeting to discuss their plans to claim the surface from humanity, planning to start by flood the mines, killing all the miners and than move on to wipe out the rest of the humans. Froglip shows up at the meeting and saying flooding the mines and simply killing the humans is not enough, he tells his father and mother that he has bigger plans that involve subjugating the humans, which they both agree to.

When Curdie comes back to the caves to listen again to the goblin royal family talking among themselves, it is revealed that Froglip plans to marry Princess Irene, the descendant of the King that long ago led humans to victory over goblins, so he can become the king of the sun people and force them to live under goblin rule. They also plan to tunnel into the castle. However this time, the goblin royals hear Curdie and he is caught.

After they trap Curdie in a hole, Froglip begs his mother to keep the sun boy so he can torment him. His mother tells him as soon as he married to Irene, he can have many humans as he like and do want with them. Curdie is than imprisoned, but he is eventually freed by Irene with her magic thread.

Froglip leads the goblin to tunnel under the castle and stealthily follows Curdie to Irene and then captures her once Curdie leaves. Whilst the goblins are beaten by the humans, they resort to their original plan of flooding the mine unbeknownst to Froglip. However Curdie had already warned the miners and they had created a dam, as a result, the water is redirected to the goblin's caves and by extension, the castle due to the recently created tunnels.

As Curdie catches up to Irene being held captive by Froglip, Froglip says that Irene is his now and is taking her back to the underground, but all three are soon swept away by the redirected flood. During the flood, many goblins, including, Froglip's parents are swept away off the castle down a cliffside and to their doom, but Froglip was a powerful swimmer and survived.

Whilst Curdie and Irene are on a rock by the cliff during the flood, Froglip clings onto the rock, still determined to marry Irene and get revenge, causing a fight between him and Curdie. Froglip has the advantage over Curdie, but Irene punches his foot, with an opening, Curdie kicks the Goblin Prince off the cliff, killing him and ending the threat of the goblins. 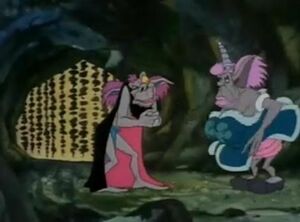 Prince Froglip with his mother, the Goblin Queen. 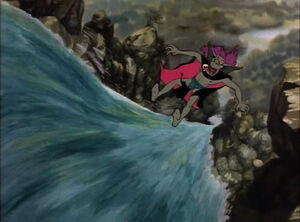 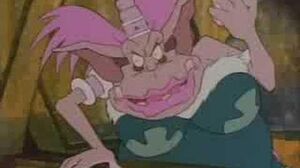 The Princess and the Goblin - Froglip's Plan 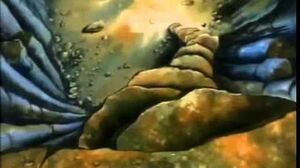 The Princess and the Goblin Full Length Movie