Prince Hans (Once Upon a Time)

Prince Hans, based upon the Disney character of the same name, serves as a supporting antagonist in the first half of Season 4 of Once Upon A Time, portrayed by Tyler Jacob Moore.

In a time frame set two years after events equivalent to the Frozen film's and one year before the first Dark Curse within the general Once Upon A Time timeline, he is first mentioned by Elsa when she warned Anna about leaving Arendelle vulnerable to Hans and his twelve brothers, who are waiting and plotting to take over the kingdom as revenge for his previous defeat. The portrayal of Hans as being in collaboration with his brothers in his plots and them desiring as a whole to conquer foreign lands for their nation differs heavily from his implied motivations and standing with his family in the film. He also unambiguously and sincerely considers Elsa a "monster" even after she has proved she is not, and overall there is considerably less room for sympathy and potential for redemption for the character here than in canon.

Some time after Anna left for Mist Haven (the Enchanted Forest), in her quest to find out why her parents left, Hans and his army, which consists of his twelve older brothers, had set up camp in the Southern Mountains on their way to Arendelle. His brothers still belittle him for being the lowest in line, and they add insult to the injury by bringing up his failed attempt to seize Arendelle's throne during his previous encounter there. He lashes back, stating that he wasn't prepared the last time, but he found something that will help him. Unbeknownst to all of them, Anna's fiancé Kristoff was spying on them and discovered their plan: they will use a mysterious urn located in a cave within the North Valley that's capable of trapping people with magical powers, such as Elsa, then take Arendelle once she's out of the way. Though Elsa and Kristoff beat Hans to the powerful urn, he and three volunteering brothers managed to catch up.

Even though they managed to dispatch his brothers, Hans holds Kristoff at sword point. He demands Elsa to either give him the urn or Kristoff will die. Concerned for Kristoff's safety, Elsa ultimately give Hans the urn. After Hans obtains the urn, and showing off his success to his brothers, he uncapped its lid and pours out a living white liquid substance. As it was heading towards Elsa to trap her, Hans gloated his supposed victory, coldly stating in a smug tone that her kingdom doesn't deserved to have a monster as its ruler. Just as the liquid substance is about to latch onto Elsa, it suddenly changes direction and morph into a woman, Ingrid the Snow Queen. Expressing her offense in his earlier insult, the Snow Queen then freezes Hans into an ice statue, leaving his brothers to flee in panic.

Later, Ingrid brings both the urn and Hans' frozen body back to the castle and place them in the wardrobe in her old room, where Elsa and Anna, who had returned from the Enchanted Forest and was imprisoned by their devious aunt, would eventually find them.

30 years later, when Ingrid is in Storybrooke finally casting her Spell of Shattered Sight on its inhabitants, Hans had thawed out, and managed to claim Arendelle as his kingdom. He and his brothers barged in on Anna and Kristoff, who were discussing a plan to save Elsa from Rumplestiltskin. Feigning on the notion that Anna had overthrow her sister, Hans decided to have her and Kristoff arrested for treason. After claiming that the freezing of Arendelle is Elsa's doing, Anna objected that Elsa is not responsible, actually done by Ingrid, from which Hans express his doubt. Before he can have the couple taken away, Anna and Kristoff fight their way out and escape. In an effort to catch them, Hans buys the pirate Blackbeard's compliance with gold to corner Anna and Kristoff. The plan work when, after the deal is struck, Hans and his brothers suddenly appear and trap Anna and Kristoff. Later, Hans takes the couple to a spot out at sea known as Poseidon's Boneyard, the exact spot where the ship that once carried Anna and Elsa's parents went down. He coldly remarks that it's fitting that Anna and her mother will die in the same place, wishing she had never helped Elsa thus leading to the series of events that would "force" him to see her dead. After having Kristoff and Anna placed in a trunk to prevent any possible rescue by a mermaid, and annoyed by her panicking hysterically when he tells them how much time has passed since Elsa is still trapped in the urn, Hans and Blackbeard had the two tossed overboard.

Later, Elsa, Anna and Kristoff return to Arendelle via a magic portal from the Sorcerer's Storybrooke mansion and dethrone Hans off-screen, Anna punching him again, this time in the eye, while doing so. Hans and possibly any of his brothers were most likely imprisoned under Arendelle's jurisdiction, given their shared goals in this version and the latter's obvious lack of disciplining to the former after his first arrest. 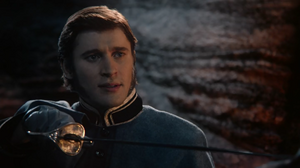