Prince of the Elves

Heir to the Bethmora Clan
Usurper

Preserving the beauty of the Earth and the intercity of the Elf people.

Form the Crown of Bethmora and take it to himself in order to raise the Golden Army and destroy mankind.

Kill Hellboy and his friends
Conquer the entire Earth and preserve the intercity of the Elf people (all failed).

Prince Nuada Silverlance is the main antagonist in the 2008 sequel Hellboy II: The Golden Army. He is a vengeful Elvish prince who is determined on wiping out humanity. Living for thousands of years, he became disgusted with the world when humanity's greed corrupted it and wanted to rid them by unleashing the Golden Army: mechanical indestructible soldiers. He tries to convince Hellboy to join him but they became enemies. He was the son of King Balor and the twin brother of Princess Nuala. He and his sister share a connection so when one is injured, both receive the same injuries. He is challenged by Hellboy for the right to command the Golden Army and was defeated. He attempted to stab Hellboy but his sister stabs herself, killing them both.

He was portrayed by Luke Goss, who also played Jared Nomak in Blade II.

When Hellboy was a boy, Professor Broom told him the story of Nuada and the Golden Army. Ages ago, elves, goblins and other mythical creatures lived among the humans and Nuada's father, King Balor ruled over them. One day, the humans waged war against Balor where neither side was victorious. A goblin blacksmith offered to build the Golden Army for Balor and Nuada urges his father to agree which he hesistantly does. The golden army left no survivors and Balor regretted his decision. He then decided to form a truce with the humans and imprisoned the army for eternity. Nuada was furious with the truce and went into exile, vowing to return and wipe out humanity.

In the present day, Nuada is living in the sewers of New York, preparing his revenge. He befriends a giant troll named Mr. Wink, who acts as his strongman. They interrupt an auction where one of the items is one of the keys to unlocking the Golden Army. He takes it and then unleashes an army of flesh-eating pixies on the buyers, leaving no survivors. Afterwards, Nuada visits his father at his secret royal court and demands that he joins him and unleash the Golden Army on the humans. King Balor refuses and Nuada slays him and takes the second key item which, alongside with the other one, is revealed to be one of the three missing pieces of the fabled Crown of Bethmora. He asks his sister for the final piece but she runs off during the fighting. Nuada sends Wink after her and he finds her in the Troll Market. Wink engages in a fight with Hellboy and is killed. Nuada becomes heartbroken over the news and vows Hellboy will pay. He pities Hellboy for fighting for the humans even when they don't care and then summons a giant worm-like forest god to wreak havoc on the city. As Hellboy was ready to kill the monster, Nuada appears before him to let him know that the forest god was the last of its kind and that Hellboy should join him. Hellboy refuses, kills the god and after all that, is scorned by innocent bystanders.

Later that night, Nuada senses Nuala's presence and infiltrates the B.P.R.D. He learns that his sister has fallen in love with Abe Sapien and tries to kill him but an inebriated Hellboy offers to fight him. Nuada easily defeats him and leaves a spearhead embedded in his heart. Each time the spear is touched, it will move deeper towards the heart and eventually kill him. Prince Nuada demands that Abe brings him the last key for Nuala's freedom. Hellboy and the others find the place where the Golden Army resides, Hellboy is cured of his injuries and Abe foolishly gives Nuada the final key to awaken the army. After a failed attempt to fight them, Hellboy challenges Nuada for the right to command the army. Nuada refused as Red was not royalty, but Nuala reminds him that being the son of Satan gives him the right and the two duel it out, Hellboy is victorious. Nuada demands him to kill him as he will not stop but Hellboy spares his life. Nuada grabs a knife and attempts to stab him but Nuala stabs herself, which also affects him and both turn to stone and crumble. Before dying, Nuada reminds Hellboy that humans will still not accept him and that in the near future, he will have to choose to save humanity or save his kind and other sorts of mythical creatures.

Nuada is a complex and impenetrable prince whose desire to surpass the lives of his people and the lives of other magical races are by no means evil, but his plans to achieve this and hatred of all humankind are more destructive, malevolent and vengeful. Nuada is a fierce, courageous and authoritative warrior who is extremely proud of his heritage. His hatred of humans stems from the devastating and calamitous war between them and his own race, as well as the humans destruction of the planet. Although his intentions are extremely generous and noble, Nuada is still willing to go to exceptional lengths to achieve his goals and has no issue whatsoever with killing potentially millions of humans, many of whom are innocent and ignorant of the crimes against his people, or with killing anyone who gets in his way. He is even willing to kill his own father, whom he professed to love, and uses his dearly loved sister in his plans, letting nothing deter him.

Nuada is reasonably cunning and manipulative, which he uses to his full advantage. He is also is cocky, stubborn and antipathetic to a fault, and genuinely believes that his actions would lead to a better world, seeming to be of the opinion that "the ends would justify the means". Nuada seems to love Nuala most in the world, he seems to be truthfully concerned when she is affected by his own injuries, and is extremely charming and compassionate of her. He seems to be shocked and hurt when he was betrayed by Nuala in the end, his last words being "Nuala, my sister". It is hinted throughout the film that Nuada's feelings for Nuala go beyond that of familial love and that he actually harbors an incestuous and attractive romance towards her. This is implied by his excessively close propinquity to her in their scenes together, and by his reaction to her burgeoning relationship with Abe Sapien, which some felt was closer to that of a jealous lover than an overprotective brother.

Despite his imperfect marks, Nuada does have positive traits. He also seems to be very tolerant, accepting, and thoughtful of other races (save for humans) and clearly loves his sister. He is also completely caring and demonstrative towards his followers, especially Mr. Wink. He attempted to sway Hellboy to his way of thinking, believing that the humans would never accept them and that he had more in common with Nuada than them. It is implied that he will never harm animals, as he kills the guards outside of the BPRD building, but spares the guard dog. However, his discrimination when it came to humans - believing them all to be monsters that were incapable of reasoning, tolerance, obsession with vengeance and inability to let go of his rage and bitterness eventually made him more villainous and lead to his downfall. 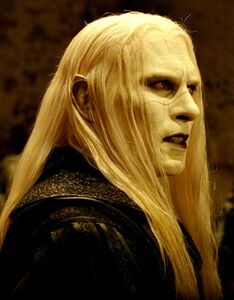 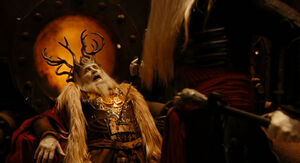 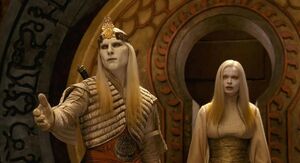 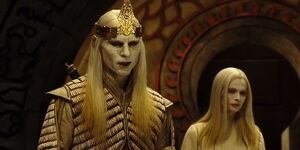 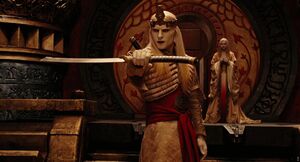 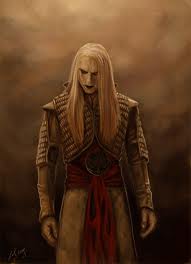