Prince of the Demons

See that the demons conquer the world for his mother (failed).

Prince Olympius (previously known as Impus) is the son of the demon queen, Queen Bansheera, and the secondary antagonist from Power Rangers: Lightspeed Rescue.

After the demons were freed, Olympius was released into the mortal world as the infant, Impus, who was cared for by the demons. He proved to be Diabolico’s greatest threat since Bansheera constantly threatened to take away the demon leader’s Star Power and give it to Impus.

After Diabolico’s first destruction at the hands of the Power Rangers, the Star Power came to the infant, which transformed him into the humanoid draconic demon, Olympius. He took Diabolico’s place as the leader of the demons, but proved not to be as skilled as his predecessor due to his naivety.

Olympius at one point, succeeded in gaining access to the Lightspeed Aquabase by capturing four of the rangers and transforming into them. However Carter Grayson, the Red Ranger, succeeded in seeing through his deception and sent him falling into the ocean. This took away much of his power and he was no longer able to match the Rangers or Vypra and Loki, who took charge, leaving Olympius to meekly obey them. He once succeeded in destroying the Rangers with a device that let him use their Rescuebird. However Carter went back in time and stopped Olympius. He did succeed in bringing back Bansheera, but she only treated him as another expendable pawn instead of her son. The demon prince quickly lost favor with her and found out that she planned to replace him with Vypra and Loki. Olympius attempted to use his monster, Vilevine, to bury them alive, but they survived and resurrected Diabolico, who hampered his plans.

He tried using the Gatekeeper of the Shadow World to trap the Rangers there with the destroyed demons roaming around. However Olympius was soon trapped there when Diabolico had the gateway destroyed and the key stolen. He tried to escape by absorbing the destroyed demons, evolving into a more powerful form, but didn’t have enough power to escape the Shadow World. Jinxer, who remained loyal to Olympius, placed a Star Power link within the Aquabase’s generator, which provided the demon prince with even more power, letting him escape. He proved to be a challenging opponent until Angela Fairweather took away his link to the Aquabase’s energy, weakening him and allowing the Omega Megazord to defeat him and destroy his Star Power. Jinxer cared for Olympius while he recuperated and the demon prince soon had his revenge on Diabolico by defeating him and letting his mother brainwash him into a mindless slave.

Thanks to Olympius' possession of the Star Power, he is quite formidable, demonstrating great strength and stamina. He has demonstrated the ability to use various weapons, primarily a double-bladed spear, but also has used the Rescuebird and Carter’s rescue blaster. Olympius also has pyrokinetic powers and is quite a skilled fighter, succeeding in defeating an army of undead demons and Diabolico twice. After becoming a super demon, Olympius was at the peak of his power and nearly destroyed all of the rangers’ Megazords by combining his power with Diabolico. He could also absorb people into the Star Power, which he could then shape-shift into, but he lost that power after being exposed to water. However Olympius slowly had to get used to the Star Power at first and it provided a great strain on him. He has created a number of monsters throughout Lightspeed Rescue, which were commonly fire or reptile-themed. 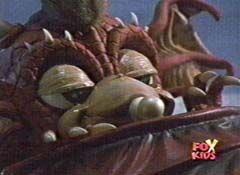 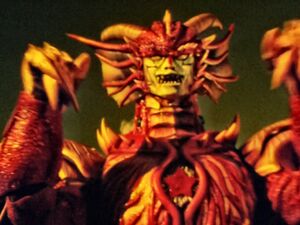 Olympius after absorbing the destroyed demons. 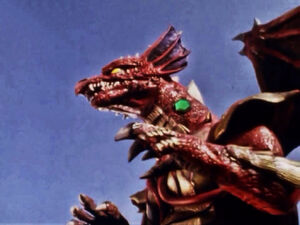 Olympius in his Super Demon form.
Add a photo to this gallery

Retrieved from "https://villains.fandom.com/wiki/Prince_Olympius?oldid=4019666"
Community content is available under CC-BY-SA unless otherwise noted.