The Secret of Anastasia

Hang Anastasia and Vladimir in Russia for their crimes (failed).

Prince Paul (also simply known as Paul) is the main antagonist of the 1997 animated direct-to-video film The Secret of Anastasia.

He was voiced by the late Earl Hammond, who also played Mon*Star in the SilverHawks series.

Paul is a pompous colonel in the Cheka (the Russian secret police) and is out looking for Anastasia Romanov, the youngest daughter of Tsar Nicholas II, who has escaped the massacre of her family. He finds her in the abandoned Romanov palace, where he and his men attempt to capture Anastasia, but Anastasia escapes with her magical instruments and flees for Copenhagen.

Paul pursues Anastasia, where he assumes the guise of Prince Paul, a Russian royal who was murdered years ago. He arrives when Anastasia is presented to the White emigres (exiled Russians who had supported the White Army) and woos Anastasia, who immediately becomes infatuated with him.

Paul and Anastasia begin to spend much time together - dancing, dining, and sightseeing together. Vladimir Ivanovitch, the general who presented Anastasia to the emigres, becomes completely jealous by this. As Paul sees Vladimir as a threat, he (in his Cheka guise) orders his men to attack Vladimir when he is leaving the hotel that Anastasia is staying at. Vladimir is thus unable to go with Anastasia when she faces the Dowager Empress.

Paul (seeing that his plans had fallen through) dines with Anastasia that night, wooing her. Anastasia remarks that she never remembers Paul being so kind, happy, polite, careful, friendly, and optimistic. Paul responds "People change, Your Highness...people change", saying the last two words in a villainous, manipulative, and sinister tone. Paul's men soon break into the restaurant and carry Anastasia away. Paul does nothing, saying that he will rescue her when the moment is right.

When Anastasia is tied up and held hostage at a warehouse, Anastasia begs Paul to let her go, but Paul refuses to help Anastasia, and reveals the truth to her - he is not a prince, but part of the Cheka, and has murdered the real Prince Paul. Paul then sings the song "Prince Charmless". Afterward, he prepares to lure Vladmir to capture him as well.

Paul soon appears before Anastasia and Vladimir, telling them that he has nothing but contempt for both of them as he reveals his plan is to return to Russia and have both Anistasia and Vladimir hanged for their crimes. He then kicks Vladimir and points his gun at him. As Vladimir lunges at Paul, the two of them fight and tumble across the floor, eventually rolling out the window. Anastasia tries to rescue Vladimir by asking for his hand, but he and Paul fall into the canal. Paul drowns while Vladimir holds on to a rock.

With Paul deceased, Anastasia is finally free from the Cheka. Her instruments then reveal that they are the spirits of her family, and they are able to revive Vladimir before they depart from earth.

Prince Paul is shown to be rude, pompous, egotistical and arrogant. He is accompanied by several mercenaries (most notably the incompetent Goofinov) and an unnamed raven.

Prince Paul is a tall man with blonde hair and blue eyes. He wears a lavender jacket, white pants, black boots, black and white gloves, and a black cape with a red interior. His Cheka guise consists of a gray trench coat with a red scarf and a gray hat with a red star (symbolizing the Soviet Union).

He is accompanied by several mercenaries (most notably the incompetent Goofinov) and an unnamed raven. 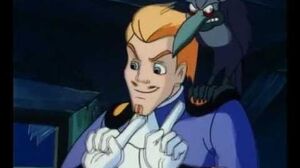 The secret of Anastasia - I'm prince charmless-1
Paul's song Prince Charmless.
Add a photo to this gallery
Retrieved from "https://villains.fandom.com/wiki/Prince_Paul?oldid=4346566"
Community content is available under CC-BY-SA unless otherwise noted.