Heir to the throne of Metamoor (formerly)

Prince Phobos (simply known as Phobos) is an evil prince and the most recurring antagonist in the comic book W.I.T.C.H. and the animated series of the same name.

He was voiced by Mitchell Whitfeld.

Prince Phobos took the throne of the kingdom of Metaworld (known as Metamoor in the W.I.T.C.H. comic book series and Meridian in the W.I.T.C.H. TV series) after his parents' s disappearance some time prior to the opening chapter of the first story arc/season, and began to drain the life force of the people in order to fuel his own magical powers with the aim of becoming strong enough to take over other worlds. However, realizing that Phobos posed a great threat, the Council of Kandrakar, a realm at the center of the universe, raised a magical shield, known as the Veil around Metamoor, sealing Phobos inside and cutting it off from the rest of all other worlds.

During the first story arc/season Phobos' primary concern is finding his lost sister Elyon Brown, whose powers are equal to his own (In the comic book, according to both Phobos and the Oracle, Elyon is even stronger than Phobos himself) and was spirited away to Earth approximately 12 years prior, so that he can drain her life force and add it to his own. With her power, Phobos would be able to break through the Veil and begin his conquest of other worlds.

At first, Phobos is unaware of his sister's identity, and sends his minions to find her, first by searching through birth records, and then using a magical talisman known as the Star of Threbe. After finding her and successfully poisoning her mind against her friends and family, Phobos brings his sister to Metamoor and attempts to gain her trust for long enough to drain her of her powers. Despite successfully draining some of his sister's power, Phobos' plans are foiled by the Guardians during the final installment of the Metamoor story arc/Season one. He is exposed as a villain, and is imprisoned by Elyon after a heated magical duel over the control of Metamoor and the kingdom's fabled Crown of Light which is belongs only to the female rulers as the laws of Metamoor decreed.

Following his defeat in Season 1 of the animated series, Phobos was briefly released by the Knights of Vengeance early in season 2, but was defeated while attempting to retake the Royal palace of Metaworld/Meridian from Elyon. He returned again late in Season 2, when the Guardians realized that, as a heir to the throne of Meridian, he was able to break the rule that "A Heart cannot be taken by force", and release him in order to deprive Nerissa of her Seal (which incorporated the Heart of Meridian), on the condition that he surrender the Seal to them afterwards. However, Phobos breaks his vow and instead uses the Seal to reconquer Meridian. After retaking Meridian, Phobos sets his sights on Kandrakar, and is on the verge of taking it when he is betrayed by Lord Cedric, who swallows him whole, thus gaining his powers for his own. After Cedric's defeat, Phobos is returned to Elyon's dungeon. In the episode "V is for Victory", Phobos causes much confusion by glamouring Matt, Caleb and Blunk as himself such as when Blunk/Phobos eats crickets and when Caleb/Phobos holds Cornelia's hand.

In the comic story arc "Trial of the Oracle", he became the new Oracle, as he was found to have used his negative emotions to switch minds with Endarno, who was the guardian of the Tower of Mists, the tower in Kandrakar where Phobos, Cedric, Frost, and many other villains were imprisoned in. Once he is restored to his rightful body by the Guardians, he realizes he has lost and leaps off of a balcony into the never-ending void beneath Kandrakar, declaring that he will "never be imprisoned again".

However, even he is unable to create portals that would link Earth and Meridian, as he himself stated in one episode, though he was able to create a portal to the enchanted painting the Guardians were trapped in, in hopes that his minions would go into the painting and finish off the Guardians (in the comic book, certain facts differ, such as the portal to the painting was an opening in the Veil, and Cedric was the one who opened the portal, though this leads to confusion, for if Cedric could make openings in the Veil, then it is surprising that Phobos cannot, and the Veil erected by Kandrakar is quite useless, and confusion is merely increased by more puzzling facts).

In the final confrontation against the Guardians, Phobos transforms Cedric into a red, more beastly monstrous version that is able to rival the combined strength of all five Guardians, though Will's quick thinking tricked Cedric into wearing the Crown of Light, thus draining the magic infused into him by Phobos away. Phobos also traps his sister Elyon in energy rings after using trickery to overpower her.

He has on numerous occasions proven to be a formidable opponent, wielding powers at least equal to those of his sister, Elyon. For example when he fought the Guardians of the Veil in the final episode of the Meridian story-arc he quickly defeated them and would have destroyed them, had Elyon not intervened. However he had stolen all of the power of Meridian and most of Elyon's powers. When he fought them again in the Nerissa story-arc he no longer possessed the power he had stolen from Elyon or Metamoor and still appeared to be more powerful than all of the Guardians put together.

He appears to be immortal as he has existed since the creation of the Veil which was created soon after the dawn of time. He is hinted to be the source of all evil in creation. Whilst he ruled Metamoor his power appeared to be so great that his moods affected the landscape of Metamoor and to a lesser extent Earth, because Earth and Metamoor are connected by Portals.

Throughout the series, Phobos is portrayed as a vicious and amoral psychopath. Like most clinically diagonosed psychopaths, he can be extremely charming and persuasive when he wants to be as he had Elyon completely taken in and when he convinced her that he was a loving sibling and slowly weened her away from her friends while also feigning concern for her well being. However his true ruthless nature is all too apparent in his manipulative treatment of those around him as well as his utter lack of sincerity. He is also prone to violent mood swings. Phobos is an intelligent being but is given to moments of impulsivity such as when he almost crosses over into Kandrakar to conquer it, forgetting that he swore on the Heart of Kandrakar he would not, almost resulting in the loss of his powers. It is this overconfident and arrogant side of Phobos's personality that usually contributes to his downfall.

Phobos ranks alongside Nerissa as one of the Guardians' most ruthless and cruel adversaries. Irma refers to him as "the triple espresso of evil".

The Whisperers (Mormoranti in the Italian original version, singular Mormorante) are a (tiny) flower-like humanoid species in Meridian/Metamoor forged by Prince Phobos with his flesh through sorcery and they speak with haunting and echoing voices. They serve as minor antagonists in both the comic book series and its animated series of the same name. In the TV series W.I.T.C.H., the Whisperers lived inside the Black Roses planted within the royal palace in Meridian. 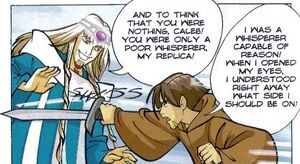 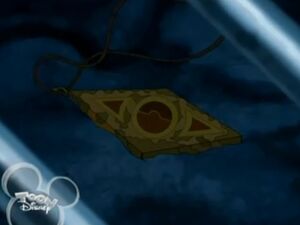 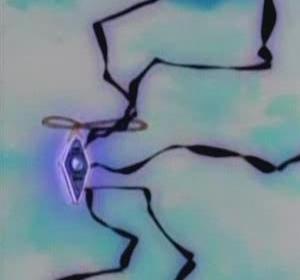 The Seal of Phobos 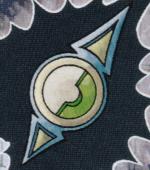 The Seal of Phobos as seen in the W.I.T.C.H. comicbook series.
Add a photo to this gallery

Retrieved from "https://villains.fandom.com/wiki/Prince_Phobos?oldid=3706147"
Community content is available under CC-BY-SA unless otherwise noted.