Kill all of his brothers to become King (partially succeeded).

Find the King's Jewel to become King.
Kill Yvaine and eat her heart to live forever as King (both failed).

Septimus is the secondary antagonist of the 1997 Neil Gaiman novel Stardust as well as its 2007 film adaptation of the same name. As of tradition in his family, he and his seven older brothers try to kill each other in order to become the new King of Stormhold after their father's demise, with Septimus being particularly ruthless.

He was portrayed by Mark Strong, who also played Frank D'Amico in Kick-Ass, Lord Henry Blackwood in Sherlock Holmes and Thaddeus Sivana in Shazam!.

At the beginning of the movie, only three of his six brothers, Primus, Secundus, and Tertius are still alive. They also have a sister, Una, who disappeared long ago. While visiting their dying father on his deathbed, the three princes are told that the existence of four potential Kings makes the situation unique because usually, one brother would have killed all other rivals by now, their father, for example, killed all of his twelve brothers before his father even felt sick.

After their father's death, the three surviving brothers meet at the king's coffin. When the bishop, who favors Prince Primus due to his gentleness, proposes a toast, all four drink deeply. After all of them stop drinking, the bishop starts choking and falls to the ground dead, making the princes realize that one of them tries to poison the others. After Tertius and Septimus fall down coughing too, Primus thinks himself victorious and solemnly takes the crown, only to realize he has been fooled when he hears Septimus laughing. Septimus, who poisoned the drinks, blames the bishop's death on Primus because he failed to drink out of the poisoned chalice.

After this, the two remaining brothers Primus and Septimus leave the palace separately to hunt the jewel. While Primus travells alone, Septimus brings with him his personal guard and a fortune teller, whom he uses to find the correct way. When the man's runes send Septimus' party south, they follow the southern road until they arrive at the sea. After telling the fortune teller to throw the runes again for some banal questions he tricks the fortune teller into revealing his alliance with Primus, killing him immediately afterward and claiming his runes for himself.

Meanwhile, Primus meets Tristan whom he suspects of being an assassin sent by Septimus.

After the death of his brother Primus through the witch Lamia, Septimus discovers that, as the last surviving son, he need only find the stone to claim the throne of Stormhold. He learns it is in the possession of the fallen star and realizes that the heart of a star grants immortality.

He and his man board Captain Shakespeare’s Caspartine to find information on the fallen star Yvaine. Before doing so, he warns his men that Shakespeare has a sinister reputation. After boarding the ship his men hold the crew at bay while he searches fort he captain. While he interrogates Shakespeare inside the ship all of his men are slain by Shakespeare‘s crew. Septimus avoids death by jumping off the ship, now alone. He then rides to the wall to find Yvaine there.

While Tristan and Yvaine are in the near the wall, the ghosts of the dead princes lament that Septimus will arrive the next day, find the necklace and become king forever because of the star.

After Lamia has taken Yvaine, Septimus arrives at the Wall. He finds the ashes of Ditchwater Sal and rides on.  At the house of the witches he meets his nephew Tristan and after a moment of hostility the both of them team up to kill the witches. While storming the house, Septimus discovers his sister Una as a hostage of he witches. He then fights the witch Empusa who attacks him with fire, killing her by impaling her heart with a spear. He proceeds to walk toward the other two witches, but Lamia uses a voodoo doll to first break his arm and leg and then drowning him by dumping the doll into a pool.  Moments later, his soaked ghost appears next to the ghosts of his brothers. As the princes have to stay ghosts as long as one of the male heirs is crowned, they realize that they have to spend eternity witch each other because all princes are dead.

After the death of her sister Mormo, Lamia uses the voodoo doll to make the corpse of Septimus fight Tristan, to the horror of the prince’s ghost. The fight ends when Tristan drops a crystal chandelier onto the dead prince, burying him in the ruins while the princes applaud Tristan for the death of the witch queen.

When Tristan finds the king’s jewel, the princes realize that Tristan as the last living male heir of the king of Stormhold will be the new king. As a new king is finally found, their ghosts are released and disappear, finally resting in peace. 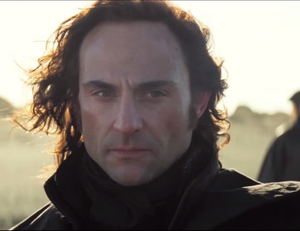 The princes at their father's deathbed. 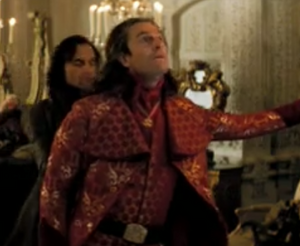 The brothers are tasked to find the King's Jewel.

The Princes realize that the wine is poisoned. 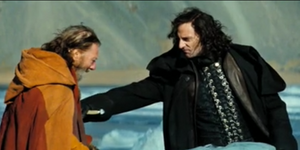 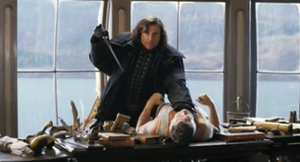 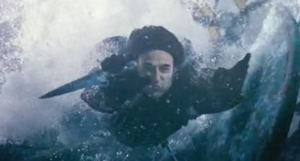 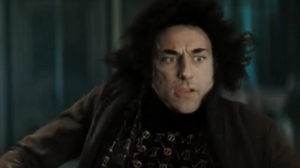 Septimus drowns in the air.

Septimus is reunited with the ghosts of his brothers.