Prince of the Machine Empire

Messing with the Power Rangers.

Robotic Spoiled Brat
Prince Sprocket is the Prince of the Machine Empire and a supporting antagonist from Power Rangers Zeo, as well as a minor villain In Space.

Prince Sprocket is the son of King Mondo and Queen Machina who seems to get nothing right. Sprocket, along with the rest of the Machine Empire, journeyed to the Moon from where they planned to stage their invasion of Earth. Sprocket often helped his father think of plans to take down the Power Rangers and though he was a spoiled brat, he was still a considerable opponent. As a bumbling spoiled brat, he is often made a fool of by the Zeo Rangers. He shares his parents' hate for the Zeo Rangers, but his attempts to defeat them are usually foiled because of his stupidity (and likely his naivete due to his youth).

Heir to the throne of the Machine Empire, Prince Sprocket is whiny, obnoxious and very demanding child bot. As for Mondo's servant, Klank thinks the Prince is not fit to rule. Sprocket longs to inherit the evil throne which is currently occupied by his mechanical father.

He was upset when his older brother, Prince Gasket, returned meaning he wouldn't become the King of the Machine Empire. Sprocket later tried to get rid of Gasket after he returned for the second time by tricking him into growing giant to fight the Power Rangers. But this plan failed and his older brother almost gave him his what for, until King Mondo showed up and drove him away. Sprocket was blown up along with the rest of the Royal House of Gadgetry but was repaired by the United Alliance of Evil and attended the alliance's meeting on the Cimmerian Planet. Prince Sprocket took part in Dark Specter's assault on the universe, however he wasn't seen during  Zordon's energy wave. It is assumed he was either destroyed or purified. 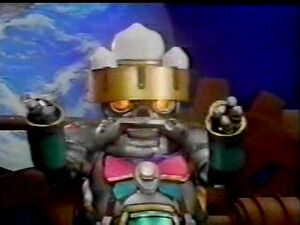 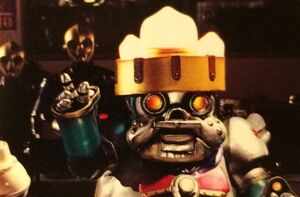 Retrieved from "https://villains.fandom.com/wiki/Prince_Sprocket?oldid=3894904"
Community content is available under CC-BY-SA unless otherwise noted.