Tormenting and taunting her enemies.

As her alternate self, she looks exactly like the real Celestia, but she wears purple boots, a necklace with a small hood, a crown that is similar to Maleficent's, and bands around her tail with a scorpion's tip. She later wears a black outfit with a top hat, making Evil Luna remark that she is such a clothes horse. Her cutie mark depicts a sun with a black sphere, as opposed to the real Celestia's having a yellow sphere.

Unlike the Celestia, who is kind, intelligent, wise, and mature, Evil Celestia is cruel and quite childish, taking every chance to taunt her enemies and treated her fight with Celestia as "playing". She would even be excited that both her and the other world would collide.

In the Reflections Saga, it is revealed that Princess Celestia and Starswirl the Bearded created a mirror that leads into a parallel universe (similar to the one that was used by Sunset Shimmer). They use it to travel to several alternate universes, but when Starswirl learned that Celestia has been returning to a single universe several times to meet someone against his wishes, he sealed the portal to that universe to protect both, upsetting her.

Many years later, Celestia used the portal to return to that universe to meet her friend again, but returned beaten and battered in front of everypony else. She then explained that the universe she had been visiting is an alternate version of Equestria, ruled by a benevolent version of King Sombra, but terrorized by the malevolent versions of herself and Luna. She then tells that she cannot return to that universe because of a paradox theory that Starswirl was weary of, and asks the Mane 6 (plus Spike) to go in her stead.

Arriving at the destination, they find the Alternate Equestria to be similar, yet erratically different, with Canterlot being a worn-down ghost town, Discord a superhero (he has a statue of himself instead of actually being petrified), and stained glass windows depicting villains from the series as symbols of their opposite selves (Flim Flam Brothers as judges and Fairness, Trixie as an alicorn and Humility, and Queen Chrysalis as Love).

They meet up with the alternate Sombra, but are then attacked by the Evil Celestia and Luna. Celestia asks Sombra has thought about her "offer", to which Sombra rejects. They then see Twilight, and are surprised to see another alicorn besides themselves, and begin taunting her tiny horn, which Twilight uses to sting them. A fight ensues, but they are interrupted by a letter from Celestia warning that whatever harm they inflict on the evil Celestia and Luna will happen to the real one. Bored, the evil sisters take their leave to spread more chaos and misery, with Celestia warning Sombra that he can't say "no" forever.

Later, Celestia slouches on her throne with her alternate pet Philomena (who looks more like a vulture). Celestia pouts over not having any more time to persuade answers out of her other self before she escaped. Her sister suggests spying on the ponies to see what they know, to which Celestia agrees, and Luna heads back to Sombra's castle in the form of red smoke. Sombra reveals that the offer Celestia made was that if she and her sister Luna were able to cross over the Prime Equestria while allowing Prime Celestia to cross over to his world and leave his world safe. Sombra refused, because if he accepted then Prime Equestria will look like what Alternate Equestria currently looks like. When Luna comes back she tells Celestia all about how King Sombra and the Mane six (and Spike) plan to imprison them.

When Evil Luna spots King Sombra and the Mane "Seven" coming she fears that their imprisonment is near, but Celestia says not to worry because she has to get her (Celestia says them) to the Prime Equestria. When the gang gets to the evil princesses castle, Celestia offers her deal again to which Sombra once again refuses. Then Evil Celestia attacks her own sister to hurt the Prime Luna. Luna was still evil so she didn't seem hurt on the inside at all. When the two worlds begin to merge, Evil Celestia laughs that this is even better than she hoped. Prime Celestia transform herself into some sort of star pony (who fans call Solar Flare a Celestia counterpart to Nightmare Moon) and battles her evil counterpart. Once the crystal imprisonment starts in goes perfectly well, until they realizes this also affect the good Celestia. Evil Celestia offers Sombra one last time of her offer, while good Celestia is willing to sacrifice herself. King Sombra intervenes just in time and comes up with another plan. He will extract the Evil from alternate Celestia and Luna. Once he does that the evil magic from the evil princesses escapes and the evil colors from their cutie marks melt off. Celestia turns good and her sister Luna turns good "again." They use their good magic to control the sun and moon and the alternate Equestria looks beautiful once again. Alternate Celestia is last seen witnessing the Prime citizens return to their world. It is implied that Celestia now rules Equestria and watches over the now evil Sombra with her sister. 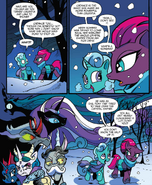