The Legend of Zelda: A Link Between Worlds

Taking care of her kingdom and trying to prevent it from destruction through any means possible.

Steal Hyrule's Triforce so that she can save her kingdom (formerly, before redemption).

Princess Hilda is the secondary antagonist of The Legend of Zelda: A Link Between Worlds. She is the Lorulean counterpart of Princess Zelda and the mastermind behind Yuga's plot to steal the Triforce of Hyrule.

Hilda is unique among Zelda villains, as she is the desperate ruler reduced to extreme measures to save her dying kingdom, while every other acts out of a thirst for power or the drive to destroy.

She was voiced by Kei Hayami.

In the kingdom of Hyrule, all was peaceful until a mysterious sorcerer named Yuga began kidnapping descendants of the Seven Sages who long ago sealed away Ganon, the dark lord who wielded the Triforce of Power, by turning them into portraits. He even captured Princess Zelda, who had the Triforce of Wisdom, forcing the young hero, Link to save her.

When Link chases Yuga through a portal in Zelda's room, he ends up in Hyrule's sister world of Lorule, which he finds on the verge of collapsing. He witnesses Yuga utilizing the descendants and Zelda's portraits to summon Ganon and then fusing with him to become Yuga Ganon. Just as Yuga Ganon is about to kill Link, Princess Hilda teleports into the room and binds him with dark magic. She takes Link out of the castle, and speaks to him through his mind.

Hilda claims Yuga's actions are her fault and that the Seven Sages have been scattered across Lorule. She tells Link that he must travel through Lorule and brave many dungeons haunted by monsters to rescue the sages. By doing so, he would obtain the Triforce of Courage and become powerful enough to defeat Yuga Ganon and save Zelda.

Hilda talks to Link telepathically whenever he enters a new area in Lorule, describing the new place and hinting if a sage is there or not. Occasionally, when Link rescues a sage, Hilda will be shown talking to Zelda's painting about how beautiful and peaceful Hyrule is compared to Lorule.

When Link arrives at Lorule Castle after receiving the Triforce of Courage from the Seven Sages, Hilda speaks to him once more, claiming that Yuga Ganon had broken his bonds and has taken over the castle. She then breaks the seal she placed on the castle so that Link can get in.

When Link reaches Hilda, he is confused that Hilda is the only person in the room. She taps Zelda's painting, and takes the Triforce of Wisdom from her. She then faces Link and explains to him that long ago, Lorule had its own Triforce until it was destroyed by her ancestors to stop the wars for its control. Unfortunately, with no Triforce to sustain it, Lorule slowly decayed throughout the centuries and will soon be completely destroyed. Hilda then tells how much she envied Hyrule for its own Triforce, and reveals that everything that has happened was all part of her plan to take Hyrule's Triforce and use it in order to save her dying kingdom, even though it would spell Hyrule's doom. Hilda then absorbs the Triforce of Wisdom into herself and summons Yuga Ganon into the room to attack Link and take the Triforce of Courage.

After Link defeats Yuga Ganon, Hilda orders her advisor to give her the Triforce of Power so that she could fight Link herself, but Yuga Ganon reveals that he was planning to betray Hilda the entire time and plans to use the Triforce to become a god and remake both Lorule and Hyrule in his image. He then traps Hilda in a painting and absorbs it into his body to take the Triforce of Wisdom. Yuga Ganon attempts to kill Link and take his Triforce, but even with two pieces against one, he is defeated and destroyed once and for all. Later, Hilda is found unconscious in the spot where Yuga was slain.

After Link frees Zelda from her painting, Hilda gets up and in spite of having been shaken up, she tries one last time to attack, but is surprisingly stopped by none other than Ravio: a shopkeeper Link allowed to live in his house.

Ravio then reveals himself as the Lorulean counterpart of Link and talks sense into Hilda by explaining that the actions she took were the very reason why their world's Triforce was destroyed in the first place. While initially mad at Ravio for his involvement in opposing their plan, Hilda realizes her mistake and takes Link and Zelda to Lorule's Sacred Realm, using the bracelet Ravio gave to Link to send the two back to Hyrule.

Having arrived in Hyrule's Sacred Realm with the Triforce in front of them, Link and Zelda use it to wish for the restoration of Lorule's own Triforce. The last scene shows Hilda weeping in joy before the Triforce of Lorule, as her beloved kingdom is being restored, expressing her eternal gratitude to Link and Zelda.

During New Game Plus, if Link reads from Ravio's journal inside his house in Lorule, it's revealed that Yuga had been manipulating Hilda prior to the events of the game. Yuga discovered a way into Hyrule and then played on Hilda's desire to save their kingdom so he could convince her to steal Hyrule's Triforce. Ravio wasn't able to make Hilda see Yuga's treachery and didn't have the courage to confront Yuga himself, so he left for Hyrule to find Link and help him stop the pair.

Hilda appears in Super Smash Bros. Ultimate as a shield-type primary spirit. Her spirit battle is against Zelda and Young Link on the Temple stage. Lord Nightmare will occasionally be summoned as an Assist Trophy to cover the stage in darkness.

Like her alter ego Zelda, Hilda is a powerful magic user, although unlike her double, she uses dark magic instead of light. She has shown herself capable of communicating with Link at any distance by telepathy, invoking things, teleporting, magically immobilizing beings, and creating powerful protective barriers.

Hilda is also very intelligent, being able to lead a complex plan with Yuga and manipulate Link effectively without him knowing it, though she was completely unaware of Yuga's intention of betraying her. Hilda's physical resistance and determination are also to be noted. 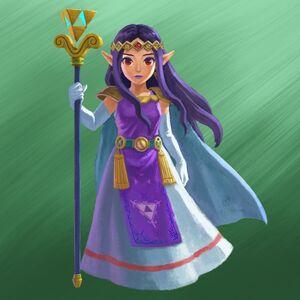 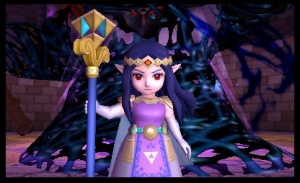 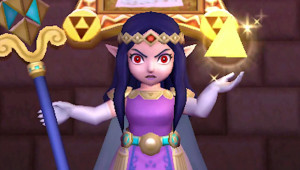 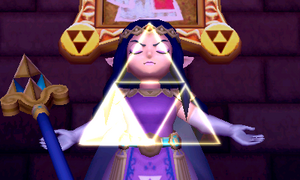 Hilda steals the Triforce of Wisdom. 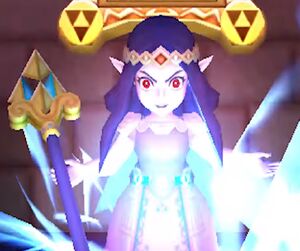 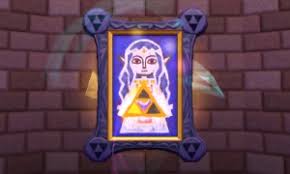 Hilda as a portait after being betrayed by Yuga. 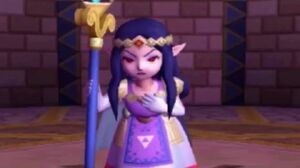 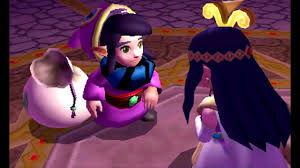 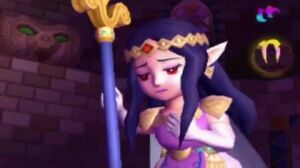 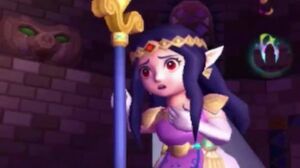 The Princess realized that her actions mimic the ones that resulted in the destruction of Lorule's Triforce. 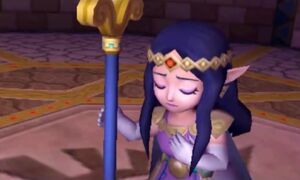 Princess Hilda and Ravio witness the rebirth of Lorule's Triforce.