Goddess of the Flame Mountain

Get revenge on Sun Wukong for turning her son into the Red Boy.

Unlike the majority of the other antagonists in Journey to the West, Princess Iron Fan is neither an evil demon nor a malevolent monster with a taste for human flesh. In fact, she was an Immortal who had attained the Way. When she was first introduced in the novel, she was revealed to be a person who knew how to take advantage of a situation, in exchange for her annually extinguishing the Fiery Mountains so crops could be sown and reaped, the residents who lived near those mountains had to personally present her with offerings of food and wine once every ten years. Besides this, she was never shown or known to have hurt innocent people.

However, Princess Iron Fan also had a tendency to hold long, passionate grudges - she loathed Sun Wukong for how her son, the Red Boy, was subdued into becoming one of the Bodhisattva Guanyin's attendants, for she had not seen him since that incident. Hence, she repeatedly refused to lend Wukong her fan (which he needed to put out the Fiery Mountains), and even went as far as to giving him a fake one.

She is genuinely cares about his family, and while clearly jealous, she's never been shown to be envious towards the Jade Face Princess, despite the fact that the latter was the cause of her husband divorced with her. In the end, Princess also shown remorse upon seeing her husband being subdued by the deities, and even learned and successfully achieve her redemption later on.

Not much is known about Princess Iron Fan's past, except for she once married to the Bull King and gave birth to the Red Boy. At some point, she possessed the magical Iron Fan, and used it to remove the fire on the Flame Mountain, though since she only fanned once each time, it would only able to be removed for a year, before the fire startes again. Using this advantage, the Princess made the residents near there revered her as their goddess, and they would have to give her some food if they want her to solve their problem about the Flame Mountain. The Bull King then divorced with her in favor of the Jade Face Princess (a demonic fox) and the latter's wealth.

When Xuanzang's group arrived at the Flame Mountain, Sun Wukong wanted to borrow her fan in order to remove the fire, but she turns him down as the monkey has been on bad terms with her son, the Red Boy before. After a little argument, Princess Iron Fan fanned Wukong to the Lingji Bodhisattva's mountain, however the latter gave Wukong a magical item to against the wind caused by the fan.

Wukong later returned to Princess Iron Fan's cave, and managed to go into her stomach, kicked and punched her guts from the inside, forced her to gave the fan. Unknown to Wukong however, it's actually a fake fan. After discovering this and barely escaping from the fire, he disguised as her former husband, tricked her to give him the real fan. Unfortunately, the real Bull King, angered upon learning this, quickly chased Wukong, disguised as Zhu Bajie, managed to trick Wukong and took back the fan, led to Wukong and the real Bajie to fight him.

Despite Sun Wukong and the Bull King seems to be equal in the fight at first, with the help of the deities, Wukong managed to defeat the Bull King. To save her former husband's life, Princess Iron Fan forcibly gave Wukong the real Iron Fan, and revealed to him that the fire can be removed permanently if he fanned 49 times. After everything was resolved, Wukong gave her back the fan. From that onwards, Princess Iron Fan learned to redeem herself, and eventually succeeded. 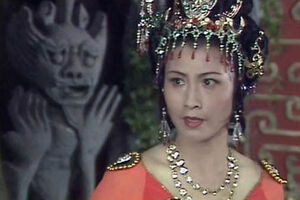