Evil Princess (by Sofia)
Queen Ivy (by herself)

Princess of the unknown black and white Kingdom (formerly)

Princess of the island prison (currently)

Getting her way.
Having a kingdom of her own.

Take over Enchancia and destroy the Amulet of Avalor (failed, but later abandoned).

Have a kingdom of her own (succeeded, though she originally did not know it).

Princess Ivy is an evil princess and the titular main antagonist in the Disney special Sofia the First: The Curse of Princess Ivy, until her reformation as an anti-hero in the episode "Ivy's True Color". She is known for creating black and white butterflies in order to erase the color from Enchancia.

She was voiced by Anna Camp, who also played Sarah Newlin in True Blood, and Aubrey Posen in Pitch Perfect.

Ivy's most defining character trait is her hunger for power. She wasn't satisfied with her exceptional magical abilities, she wanted to rule the kingdom. Her wishes come before everyone else, even her own sister who she betrayed and attempted to dethrone. She had no qualms with conquering someone else's kingdom, enchanting people, or harming innocent children. She won't help solve a problem if it doesn't affect her. She is proud and will not easily accept help from others or admit that she has a problem.

Ivy is very intelligent. When she was freed, she quickly adopted a kind personality to fool Amber and find out how she got to Enchancia and how to keep herself from being sent back to the island. She uses flattery to get people to open up to and trust her but will quickly betray them when she gets what she wants.

However, she isn't vindictive. She cares about her butterflies who she knows by name and was worried when she couldn't find them. She willingly helped Roma and let him stay by her side and even grew to care about him. When she thought she lost Roma, she realized she cared for him and was heartbroken at the thought of losing him forever. With Sofia's help, she accepted this feeling and became a caring person.

Ivy has black and white hair wears and a black and white dress. She bears a resemblance to Cruella De Vil, except that she doesn't wear makeup to make her skin look pale and that her lips are pink instead of red.

Princess Ivy was born in a faraway black and white kingdom. At some point in her life, she learned very powerful black and white magic which she manifests in her butterflies and dragonflies. She considered her magic superior to all others to the point where she let the power go to her head. When her older sister became the new ruler of their kingdom, Ivy became consumed by jealousy and tried to overthrow the queen, but the attempted coup failed and Ivy's sister immediately banished her from the kingdom forever and ordered for her to be marooned on a desert island.

Sofia the First: The Curse of Princess Ivy

Unfortunately, this would not be the last time anyone would hear of her. Amber found out about Sofia's amulet, and jealously took it without her permission, so she could have a turn. Unfortunately, stealing Sofia's amulet and betraying her trust counted as a bad deed, and the amulet put a curse on Amber by summoning Ivy and setting her free. Delighted by this turn of events, she plans to claim the kingdom of Enchancia as her own by overthrowing King Roland and turning the whole land black and white to suit her taste. To ensure of this, she pretends to be a friend to Amber.

After learning that the amulet would send her where she came from, Ivy shows her true colors by having one of her butterflies to steal it from Amber so she could destroy it to avoid going back to her island prison (Sofia finds out about Ivy's arrival and Amber's theft of the amulet when she hears about this.). Ivy also threatens to set her butterflies on both Sofia and Amber if they try to stop her in her tracks. Sofia and Amber are then forced to team up with their old nemesis Cedric, who explained that if they need to stop Ivy, Amber had to break the curse by returning Sofia's amulet back to her. He also informs that the only thing that can destroy the amulet is the fire breath of the legendary elder dragon Everburn, who is living in the Blazing Palisades. Unfortunately, several of Ivy's butterflies have been spying on the trio and informs Ivy, who heads over to the Palisades to pay Everburn a visit. At the Blazing Palisades, Cedric, Sofia, and Amber distracted Ivy and Everburn with a flock of birds to frighten the butterflies. Amber returned the amulet to Sofia, but it wasn't enough to break the curse. After the sisters fell down a chasm outside of the cave, Ivy told her butterflies to get the amulet, but Everburn (having caught wind of Ivy's true plan) threatened to roast the butterflies if she doesn't leave the little princesses alone. Despite this setback, Ivy was able to return back to Enhancia to finalize her takeover.

At the castle, Ivy had hit the royal family and Cedric with her memory-erasing dragonflies. When Amber refused to give Ivy the amulet, Ivy was about to hit Sofia with a dragonfly when Amber jumped in between them, letting the dragonfly erase her own memory. Ivy was about to hit Sofia with another dragonfly, but it kept disappearing as it turns out that Amber's self-sacrifice had broken the curse. Since the curse is now broken, a screaming Ivy is sent back to her island prison, and nobody (Sofia and her animal friends are the exception), remembered Ivy, what she did, or what happened because her dragonflies erased everyone else's memories.

Ivy makes her reappearance in "Ivy's True Colors", where the Amulet summons Sofia to help Ivy. Due to their previous encounter, Ivy treats Sofia with disdain and initially refuses her help, until Sofia informs her that the Amulet cannot send her back to Enchancia until she helps Ivy. After Roma informs Sofia that Ivy's butterflies have gone missing, Ivy relents. Together with Sofia, they find the butterflies circling a patch of colorful flowers. Although Sofia helps Ivy retrieve her butterflies, the Amulet doesn't send her back; Ivy dismisses Sofia's predicament as not her problem and returns home.

It turns out that Miss Nettle grew the flowers, Wake Upsy Daisies, as a cure for the "Deep Sleeps": a magical phenomenon that affects animals and puts them to sleep indefinitely. The magic in Ivy's butterflies allowed them to grow, and without them the flowers cannot survive. Ivy refuses Sofia and Miss Nettle the use of her butterflies, forcing them to free the butterflies with Roma's assistance.

Upon discovering this, Ivy is angry at Roma for his betrayal and chases after Sofia and Miss Nettle, sending her memory-erasing dragonflies after Miss Nettle to harass the fairy. Unable to disobey Ivy, Roma helps her recover the butterflies but soon falls victim to the Deep Sleeps. Ivy is surprised when she begins experiencing sadness and worry over losing her only friend, and when Sofia points this out to her, this convinces Ivy to free the butterflies.

Having come to realize that it feels good to help, Ivy assists Miss Nettle in growing the Wake Upsy Daisies, and the local animals gift Ivy a wooden throne out of gratitude. Ivy realizes that her original goals of wanting a kingdom of her own were misguided, now that she has one in the form of her island prison, surrounded by friends. This realization allows the Amulet to send Sofia home. 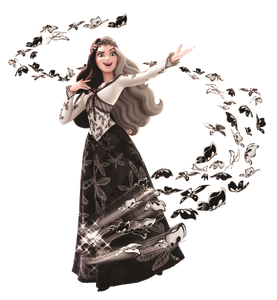 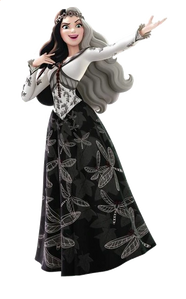 Retrieved from "https://villains.fandom.com/wiki/Princess_Ivy?oldid=4075422"
Community content is available under CC-BY-SA unless otherwise noted.