Rule the planet of Yugopotamia (both succeeded for a while, then failed).

She is an alien princess that Mark Chang left on the altar because he considers her beautiful appearance to be hideous. She wants to marry Mark so that she can cast him aside and rule Yugopotamia herself.

Mandie has yellowish-green skin, elf-like ears, long purple hair, light green colored pupils, a pair of curled antenna on her head resembling that of a butterfly, and black lipstick. She wears crystal earrings and a headdress, an emerald green (light blue in picture) corset, skirt, and knee-high boots. Mandie also has sharp teeth, shown whether she is angry or smiling.

Mandie was looking forward to being married to her future husband to be Mark Chang of Yugopotamia. However, once Mark fled the planet and left her at the altar, her true colours comes out. When her heart gets broken, she becomes extremely angry and vengeful that she will kill anyone in her path, and what she hates the most is being left alone at the altar.

Mandie is the princess of Boudacia, a neighboring planet right next to Yugopotamia. She was engaged to the Yugopotamian Prince Mark Chang, as a result of a wanted alliance with Yugopotamia by her parents. However, as Mandie is about to marry him at an altar, Mark fled to Earth due to Mandie's appearance considered and thought to be hideous by the aliens living in the planet. Enraged, Mandie swore she'll find Mark and force him to marry her or he dies.

Mandie also possesses other numerous weapons such as bazooka guns, a double bladed axe, and a bomb. 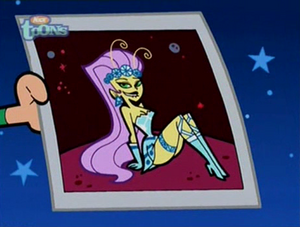 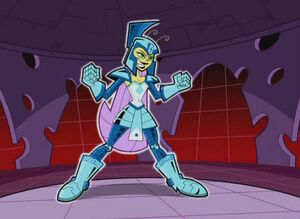